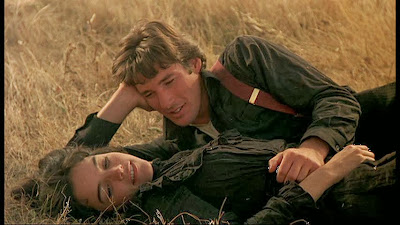 Terrence Malick has a reputation for making some of the most beautiful films around. I’m honestly not sure how much of that reputation really belongs to Malick and how much should belong to his cinematographers, but impossible to get away from. There is an undeniable beauty to Malick’s films. Of all of them, Days of Heaven may well be the most visually striking. It may have been eclipsed by The Tree of Life, but even that is a matter of opinion. There’s no denying that Days of Heaven is a film of surpassing cinematic beauty.

Make no mistake; that is precisely where the focus is in this film, because it’s certainly not on the depth of the story. In truth, the story tends to be the biggest complaint about Days of Heaven. It’s one of those films that can be summed up in a couple of sentences. Around the 1920s, Bill (Richard Gere) and Abby (Brooke Adams) are a couple, but Bill insists on telling people that they are brother and sister to avoid dealing with questions about their marital status. As the film opens, Bill accidentally kills his foreman in a steel mill, and Bill, Abby, and Bill’s younger sister Linda (Linda Manz) travel to the Texas Panhandle to work on a wheat farm.

It is here that they encounter the unnamed owner of the farm (Sam Shepard), who is sick with an unnamed but fatal illness. He finds himself attracted to Abby, and marries her with Bill’s blessing. Bill assumes that the farmer will soon die, allowing Abby to inherit his vast fortune. However, the farmer manages to live far past his prognosis, and Abby begins to reciprocate his feelings. This leads to the third act, when the farmer and Bill finally confront each other over Abby’s affections, the farmer having come to understand the actual nature of Bill’s and Abby’s relationship.

The whole film is narrated by Linda, who sees the proceedings through the perspective of a young, uneducated child. In many respects, this accounts for the simplicity of the plot. Since it all comes through the point of view of Linda, the relationships lack any subtlety. In many ways, she is more affected by her friend (Jackie Shultis) leaving at the end of the season than she is by any of the interactions between Abby, Bill, and the farmer. It means that she is in many ways the only character in the film with three dimensions, since in most respects, the other characters are little more than how she sees them.

It takes a particular mindset to really appreciate a Terrence Malick film, and it’s not always a mindset that I’m able to find. There’s a reason that it took me this long to get around to watching this one—I was never really in the mood to spend time watching a story that unfolded this slowly. Malick requires that sort of contemplative mindset, or at least the Malick films that I’ve seen require it. The focus seems very rarely to be on the story itself and far more on the look of the film and the slow pace at which things unfold.

That’s sort of the reality of Malick’s work, though. It often feels like his films could easily be edited down to half their length and still tell the same story, but this would eliminate the visual poetry of his film style. I’m just not always in the mood for visual poetry. There's not a great deal of action here, although the locust swarm toward the end is pretty damned impressive.

This sounds like I’m going to say a lot of terrible things about Days of Heaven, but that’s not the case. This is a film of staggering and singular beauty, and the slow pace suits it. While the story could in fact be told in far less time than the 90 minutes or so the film lasts, it would be a much lesser film if it was cut down. It is far more than its plot because of how damn pretty it is.

But that’s really all there is. There’s sparse dialogue, romance seen from afar, and gorgeous landscapes. Even the performances are little more than something to be placed inside the vast, beautiful, and sometimes unforgiving landscape. If that’s not enough for you, Days of Heaven is a bad choice.

It’s worth noting that Days of Heaven is the film Malick made just before his 20-year self-imposed exile from the film world. It would be his last cinematic statement until The Thin Red Line. As a final note, Sam Shepard looks disconcertingly like Dennis Leary.

Why to watch Days of Heaven: It’s beautiful in a way few films can claim to be.
Why not to watch: The story isn’t as robust as it could be.