Welcome to the Machine

Film: The Man with the Golden Arm
Format: DVD from personal collection on laptop. 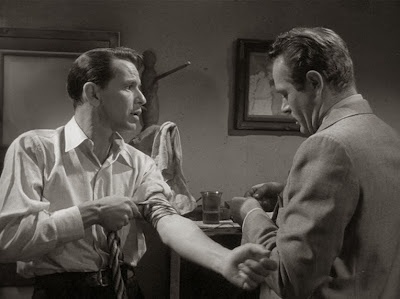 I’m kind of fascinated by Frank Sinatra as an actor. He was fine in a musical or light comedy, but he was surprisingly effective as a dramatic actor. The Manchurian Candidate is my favorite of his films, but I genuinely haven’t seen a dramatic film he was in that I don’t at least like. From Here to Eternity is certainly his most acclaimed, The Manchurian Candidate is his most complicated, but The Man with the Golden Arm is the most aggressive, at least that I have seen. I knew going in this was a film that dealt with heroin addiction. I didn’t expect it to be a film noir with heroin as the bad guy.

Frankie Machine (Sinatra) is out after a short stint in prison. He was busted for running an illegal poker game, taking the rap for his boss Schwiefka (Robert Strauss). While in the joint, a couple of important things happened to Frankie. First and foremost, he kicked his heroin habit. Six months cold turkey will do that to a man. Second, he learned to play the drums. Now finally clean, Frankie is looking to stay clean, wanting nothing more than to hook up with a band to play for, allowing him to take care of his wife Zosch (Eleanor Parker). Zosch has waited patiently for Frankie to be released.

Zosch is in a wheelchair thanks to a car accident caused by Frankie. He feels responsible for her over and above her constant neediness. Frankie also feels some responsibility for Sparrow (Arnold Stang), his goofy scam artist friend who follows him around like a little brother. There’s also a sense of responsibility toward Molly (Kim Novak), his ex-girlfriend for whom he still has a lot of feelings. The men he doesn’t feel beholden to are Schwiefka and his old dealer Louie (Darren McGavin).

Frankie Machine is the type who lives a life of quiet desperation. More to the point, he’s the epitome of a luckless schmuck, the guy that gets kicked in the crotch by life on a daily basis. Zosch is more or less pathetic. She’s uninterested in Frankie’s dream of playing drums because that might take him away from her. In fact, she’d be happy to see him back on heroin if that meant he’d stay with her. We learn early on that she’s malingering—she can walk but hides the fact from Frankie out of fear of him leaving her if he doesn’t feel responsible for her. Schwiefka just wants his dealer back, to the point where he gets Frankie arrested just so he can bail him out and be owed a favor. Louie, of course, wants him hooked back on smack as quickly as possible, and as life starts to wear Frankie down with pressure coming from all quarters, he lets the monkey on his back again, setting up part of the third act. That, and Louie’s discovery that Zosch doesn’t need the wheelchair anymore make for a memorable conclusion to the film.

The Man with the Golden Arm is a surprisingly bleak film. Given the subject matter, that’s certainly appropriate. Certainly some of the visuals have been left out here; we’re not going to see a needle going into Frankie’s arm, but we do see pretty much everything else when he goes back on heroin. Everything in the film is bleak and tawdry. Even Frankie’s dream of drumming for a band is kind of cheap and sad. It’s not as sad as Zosch’s desperate attempts to make her life as cheap and ugly as it had been before Frankie ended up in jail, but it’s still pretty pathetic.

Sinatra is good in this. I’m admittedly biased on that front, though, because I genuinely like Sinatra as a dramatic actor. I’m far less sold on Kim Novak as his on-again, off-again girlfriend. I’ve never really been that much able to understand the charms of Kim Novak. Here, she doesn’t seem to fit. She’s not degraded enough to be hooked up with a drunk. In fact, she’s not really degraded enough to be hung up on Frankie Machine.

Despite my personal objection to Kim Novak, a lot of this film works for me, and it does because Otto Preminger decided not to soften it up. The whole point is to make not just Frankie’s situation ugly and pathetic, but to make everything ugly and pathetic. No choice for Frankie is a good one, and the most defining character trait for everyone is weakness. Any attempt to make this a little more pleasant or easier for the audience would destroy everything The Man with the Golden Arm tries to create. Zosch is such a hateful, petty character, and because of it one of the best parts of the film. The incredibly oiliness of Darren McGavin’s Louie is worth a mention, too. I love how easily he talks Frankie into one last fix over and over again.

My most serious objection is the soundtrack. Elmer Bernstein did a lot of great soundtracks in his lifetime, but this one is far too much. It’s almost oppressive. The fault of this may in fact lie more with Preminger, who decided to blast the jazz sounds at top volume every time it appers. I frequently felt like I was being blasted into the back of my chair by blaring horn riffs.

I expected to like The Man with the Golden Arm and I did. But it’s an ugly film, and I’m not sure how much time I want to spend with it again. As a final note, “Frankie Machine” is the coolest damn name for a character in film history. And any film with Arnold Stang can’t be all bad.

Why to watch The Man with the Golden Arm: One of the best early films about addiction.
Why not to watch: The soundtrack is too intrusive.

Email ThisBlogThis!Share to TwitterShare to FacebookShare to Pinterest
Labels: Best Actor, drama, Otto Preminger, The Man with the Golden Arm