Film: The Pillow Book
Format: DVD from NetFlix on laptop. 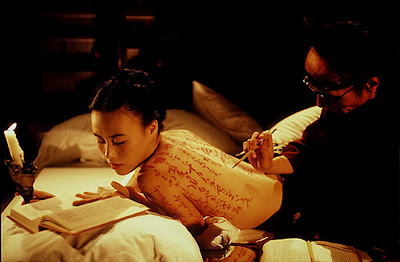 Nagiko (played as an adult by Vivian Wu) had a father who was a writer. For good luck, he would write characters on her face in calligraphy. Her aunt would read to her out of the original Pillow Book, an ancient text that was a diary of observations. Nagiko will have a connection to this diary throughout her life. We learn that her father is forced to provide sexual favors to his publisher (Yoshi Oida) in order to get his work published at all.

Once an adult, Nagiko is married off to the publisher’s apprentice. It is a doomed marriage from the start. Her husband, despite his career, is no lover of books, while Nagiko is enthralled with the printed word. Her particular sexual proclivity is to have people write on her skin. She eventually leaves her husband and flees to Hong Kong where she takes a series of unsatisfying lovers. Those who have good penmanship prove to be unworthy in bed, while those who make good lovers have bad penmanship. Like I said, it’s a kink of which I have been unaware.

Things change when she meets Jerome (Ewan McGregor). Jerome’s penmanship sucks, too, but he knows multiple languages and also challenges Nagiko to write on him instead of the other way around. This opens up an entirely new sexual world for her. While she is initially frightened by this suggestion, she eventually warms to it. Meanwhile, a photographer friend (Yutaka Honda) suggests she write a book, which he will take to the same publisher her father worked for. The book is immediately rejected.

Of course, she eventually hooks up with Jerome, who suggests that she write a book on him, which he will then take to the publisher. It works, but when it turns into a sexual tryst between Jerome and the publisher, Nagiko gets jealous and starts writing her books on other people, sending them to the publisher as well. Things spiral out of control, and what eventually happens is something more disturbing than I thought possible in a film like this. It ranks up in the realm of most disturbing things I’ve seen, but it’s best handled under a spoiler tag.

Jerome attempts to reconcile with Nagiko by faking a suicide, but the fake goes so well that he actually kills himself. Nagiko writes one of her books on his dead body. When the publisher finds out, he exhumes the body, flays it, and makes a book out of Jerome’s skin. Seeing that giant flap of freshly-flayed human skin was really troubling.

Where The Pillow Book excels is its art direction. This is a unique film to say the least. Frequently, there are small inset screens within the larger image showing us another angle of the action or a similar action at a different time. This creates an interesting visual landscape, giving us too many things to look at at once, almost necessitating a second viewing, just for concentrating on that bonus footage.

No doubt this is a truly beautiful film to behold because of the way Greenaway sets everything up. The mass of images all playing simultaneously makes the viewing experience as decadent as the sexual elements of the film. There’s too much to take in. And speaking of a lot to take in, there’s a great deal of nudity here, much of it full-frontal and a lot of that male. It didn’t bother me, but I mention it in case others would be troubled be frequent visions of flaccid penii.

I’m not sure if The Pillow Book is much of a success. It absolutely works as an artistic statement and is worth seeing for that aspect alone. Based on the story, I’d say give it a miss.

Why to watch The Pillow Book: There’s a lot to look at all the time.
Why not to watch: It explores a sexual kink that no one has.