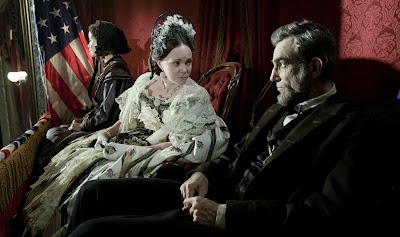 It would be forgivable to think of the term “Oscar bait” when contemplating Steven Spielberg’s Lincoln. If you think about it, this is in many ways the perfect Oscar film. You have a celebrated, multiple-nomination-winning director; a film covering one of America’s greatest and most beloved political leaders at a watershed moment in his political career; an all-star cast with more nominations than can be counted on fingers and toes; and topped off with a starring actor who is arguably (and it’s not a difficult argument to make) the greatest actor of his generation. Lincoln is the kind of film that Oscar fills its pants over. No surprise that it walked off with 12 nominations.

That said, there is a very real question when it comes to this film: does it live up to its potential. While Spielberg is certainly capable of a great film, he’s also capable of shitting the bed, getting too sentimental and maudlin, and turning a potentially great film into a pretty good one. Unless Lincoln was terrible, it was going to get nominations. The question was whether or not it deserved any of them.

Lincoln makes the smart tactical move of not focusing on the entire life of Abraham Lincoln or even on his political career or his entire presidency. Instead, it tells the story of the man through a single historical event: the passage of the 13th Amendment that abolished slavery in the United States. It places this event in its entire historical context, including the various battles waged to get it passed through the House and the variety of backroom deals that were necessary to ensure its ratification.

While we see many of these backroom deals and learn something of the personalities behind them, it is Abraham Lincoln (Daniel Day-Lewis) who rightly stands at the center of the film. Despite being off-screen for long periods of time, particularly those scenes that take place in the House of Representatives, Day-Lewis as Lincoln casts a long shadow over everything that happens. Even when he isn’t visible, he is very much always there.

Would it be wrong to call this the highest peak of Day-Lewis’s illustrious and storied career? That might be too much to say in a career with such notable highlights as Gangs of New York, There Will Be Blood, and My Left Foot. It could be argued, though, and while I may not ultimately agree that it’s his greatest performance, it’s impossible to dismiss it from the ranks completely. Day-Lewis plays the man as the way I think many of us would like to picture him. He is moved by great passions, but is a gentle man who loves his kids, cares deeply about issues, and fins it impossible to do anything without shouldering the burdens of everyone around him. It is a mesmerizing performance from start to finish, and is very much responsible for a great deal of the acclaim the film received.

He is ably assisted by a tremendous cast. First and foremost is Sally Field as his wife, Mary Todd Lincoln. It has seemed to me like a very long time since I saw a Sally Field performance where I didn’t specifically think of her as Sally Field. It’s almost impossible for me to see the character she plays through her, but I did at times here. She plays Mary beautifully, with the right level of anger, insanity, and fire.

The cast is nicely rounded out with James Spader, Tommy Lee Jones (who looks bizarre without hair), Joseph Gordon-Levitt, David Straithairn, Hal Holbrook, and Jackie Earle Haley. Throughout, in each role, it appears that Spielberg (or at least his casting director) went for people who could nail the given role perfectly. It is, top to bottom, one of the most impressive casts I have seen in a long time.

With all of that going for it, I’m not sure how Lincoln couldn’t be at least very good. The wild card is Spielberg’s penchant for going for the obvious emotional tweaking. It’s something he loves to do (see War Horse for a recent example). With the subject matter of Lincoln, it would be very easy to make Honest Abe into a tearjerker. And, for a wonder, Spielberg resists the temptation pretty much completely.

With all that, it’s not hard to figure out that my conclusion is that Lincoln is pretty much a win on all fronts. I’m not sure how soon I’d want to watch this again. It’s not specifically entertaining, but it is specifically grand in a real sense. It’s probably the best thing he’s done since Saving Private Ryan, and that says a lot, considering my love for Minority Report among other films.

Lincoln may well be the very definition of Oscar bait, but this bait reeled in a damn big fish. Most impressively, it feels much shorter than its 150-minute run time.

Why to watch Lincoln: The world's greatest living actor in what may be his greatest role.
Why not to watch: So much history not covered.