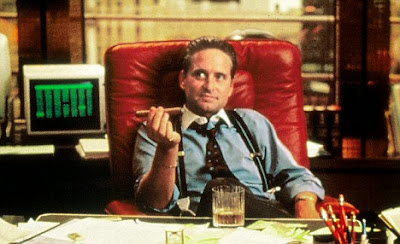 I mentioned yesterday the abrupt rise and fall of Alicia Silverstone’s career. I could say the same thing about Charlie Sheen. The difference is that Alicia Silverstone’s career vanished because she took a role in a movie that killed it (and that of Chris O’Donnell as well). Sheen’s career imploded because he went insane. Still, before he was living on tiger blood and became a bitchin’ rock star from Mars, Sheen made some pretty interesting movies. Platoon might have been the flavor of the Sheen month for some time, but I think his early career is much more dominated by Wall Street.

I have a relationship with this film. From early 1991 to early 1996, I worked for a magazine publisher. Our company produced magazines dedicated to a number of entertainment industries. I worked on the computer game magazine. We also did a movie mag, a Wired-style internet magazine, a comic magazine, and a video game monthly, which was our flagship. After a few years, the owner of the company hired a few of his friends to create software. They are the source of my relationship with Wall Street, and it’s not a positive one. A couple of the software guys worked outside my office for 6-9 months. They were obsessed with Wall Street and watched and quoted it constantly.

Wall Street is not most associated with Charlie Sheen, but with Michael Douglas. Specifically, it is best known for Douglas’s “Greed is good” speech that shows up in the middle. I’m surprised this wasn’t on The List to begin with. While not the greatest film ever made and not Oliver Stone’s greatest film, it is the perfect vision of 1980s corporate greed and Reagan-era economic policy. This is a film about making enormous fortunes by any means, the natural child of Ivan Boesky and Robert Maxwell.

Bud Fox (Sheen) is a low-on-the-totem-pole broker who has a dream of someday hitting the big time. Every day, he calls the office of Gordon Gecko (Douglas) to see if he can broker a deal. Gecko is one of the largest financiers of his type. He is a corporate raider, a glorified shark in a $3,000 suit. What he’s looking for is a deal, and eventually, on Gecko’s birthday, Bud Fox finds it. Carl Fox (Martin Sheen), Bud’s father, works at Bluestar Airline, which is just about to receive a favorable ruling from the FAA on a crash. Using this, Bud purchases a number of shares for Gecko, making him a tidy sum.

Of course, that sort of insider information isn’t available for every company, so Gecko instructs Bud in the finer points of finding, stealing, and using insider information. The deal on which Bud cuts his teeth is designed to take money out of the pocket of Sir Lawrence Wildman (Terence Stamp), one of Gordon Gecko’s high-priced enemies. This deal nets both Gordon and Bud a vast sum. It also impresses Darien Taylor (Daryl Hannah), an interior designer and former lover of Gordon.

It all spirals out of control, of course, and it naturally returns to Bluestar, where Bud’s father works. Bud arranges for Gordon to take over the airline for a relatively small amount of money by working out agreements with the unions, allowing the airline to stay in business. But the company is more valuable broken up into pieces, which will leave Carl Fox and all of his friends out of a job. In this moment, Bud gains a conscience and seeks a way to burn Gecko for his greed and save his father’s company, which takes us through the third act.

Michael Douglas is great in this, of course, and both of the Sheens are on top of their game. Wall Street is also helped by some excellent work in smaller roles. Notable here are most of Bud’s workmates. Marvin (John C. McGinley) starts out as Bud’s friend and immediate office mate and becomes someone Bud simply moves past. It’s a thankless role, but McGinley pulls it off well. Also in important roles in the office are the three older gentlemen. There is Dan (Franklin Cover), nearing retirement age and still pitching stocks like the new guys. He is who Bud and Marv most wish to avoid being. Lou Mannheim (Hal Holbrook) is successful, with his own office, but he’s had some serious hits in the stock market as well. While not appearing much, when he does he acts as something like Bud’s conscience. Finally there is Lynch (James Karen) who is the quintessential corporate shark. Also noteworthy is James Spader as an old college friend of Bud’s who gets caught up in the dangerous world of insider trading against his will.

And then there’s Daryl Hannah. Here’s the thing about Daryl Hannah—there’s something not quite human about her in my opinion. I love her in films where she plays something that isn’t quite human. Blade Runner and Splash are excellent examples. In Wall Street she comes off as wooden. For whatever reason, I’m not convinced she can pull off playing something actually human.

The value of Wall Street isn’t that it’s a great and gripping story. It’s not really that original; it’s just a tale of rampant greed and corruption for personal gain. It’s not worth seeing specifically because of the great performances, although Michael Douglas really is brilliant in it. No, the reason Wall Street is worth anything is because there is no film that better encapsulates the rampant greed and corporate raiding culture of the Reagan era. It’s pitch-perfect for that mindset, and it’s a mindset virtually everyone except Carl Fox exhibits shamelessly.

I’ve mentioned before that I ask students on the first day of class to name a favorite film as a way of introduction. Many of my students (although it’s becoming less and less common) name Scarface as a favorite. It’s a film that has a particular hold on the gangster-wannabee segment of the population. Tony Montana is looked upon as a role model and not as something horrible and perverted. The same is true of Wall Street. Evidently, there is an entire generation of brokers inspired by the focused greed and hoarded wealth of Gordon Gecko. Sociopathic role models: only in the ‘80s.

Why to watch Wall Street: The perfect encapsulation of Reagan-era greed.
Why not to watch: Daryl Hannah is only good when she plays something non-human.

Posted by SJHoneywell at 4:37 PM