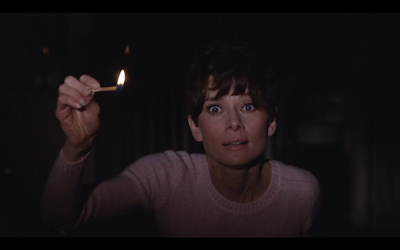 Wait Until Dark puts me in a difficult position. I like to include a summary of at least the basics of a film’s plot when I discuss it. I do this for a variety of reasons. One reason is that aspects of story are some of the things that really interest me when it comes to film. It’s also a really convenient way for me to talk about the elements of the film that I like and dislike within context. Saying that a particular scene is a problem is difficult when there is no context for that scene for the reader. It also helps readers determine whether or not a film is worth seeing regardless of my opinion. At least that’s what I tell myself.

With Wait Until Dark, though, I don’t want to do that. This is a film that benefits greatly from as cold a viewing as possible. Know too much going in, and all of the wonderfully intricate twists and turns will be spoiled, and this is not a film to be spoiled. This is a story to see play out as it happens with no direct knowledge of what will happen next. With a number of films these days, it’s easy to forget that there’s some great suspense tales that really work all the way through. We give up a lot when we reward filmmakers for not making us work at the movies we watch. Wait Until Dark makes us stay with the story and work at what everything means. It rewards us with one of the truly great film climaxes ever produced.

A woman (Samantha Jones) takes possession of a doll stuffed with heroin. She arrives in the United States, but sees someone who scares her. Rather than confront that person, she makes a quick friend of Sam Hendrix (Efrem Zimbalist, Jr.) and leaves the doll with him in the hopes of retrieving it later. Sam knows nothing of the doll’s contents. Sam’s wife Susy (Audrey Hepburn) was recently blinded in an accident and is learning to operate without sight. Now, three men connected to the woman with the doll want the doll (and the heroin) back. These three are Mike Talman (Richard Crenna), who is comfortable playing confidence games; Carlino (Jack Weston), most at home pretending to be a cop; and Roat (Alan Arkin), the evil mastermind behind the whole plan. Rounding out the cast is young Gloria (Julie Herrod), a neighbor who helps out Susy with things like shopping and cleaning up the apartment.

That’s all you’re getting. If you want to know all of the different ways these many pieces fit together, you need to watch the film. You should really watch the film.

Wait Until Dark is great for a variety of reasons. The primary one is that these are all smart characters. We expect at the very least that Roat as the leader of the three bad guys will have at least a criminal cunning and that would be enough. But it’s far better that both Carlino and particularly Mike are equally smart. Even better, Susy is smart, too. She may be smarter than all of them. It’s a great switch from what we might expect. Women in film are often depicted as helpless, and with the added problem of Susy being blind, it would seem to be a natural place to go. That’s not the case here; Susy, despite her blindness, is fairly badass. She defends herself far better than I could in that situation.

If you need more, there’s plenty more to enjoy about Wait Until Dark. This is a really smart plot. We get everything we need to follow the story in the first act. What follows is pretty complicated and has a lot of steps, but it’s not difficult to keep track. What’s better is how nicely it all holds together. It’s great to watch everything slowly reveal itself and come together. It’s just as fun to see how Susy plays with these plans and how quickly the criminals adapt to the curve balls she throws at them.

Both of these elements, as important as they are, pale next to the most important aspect of the film: Wait Until Dark is tense as hell. We’re never sure of Susy’s safety. In fact, we’re sure that she is constantly in danger and that the danger is constantly increasing. It doesn’t break for a second; it just builds and builds until it finally has to break, which it does in the last minute or two and not before. It’s the sign of a well-written screenplay that the tension builds so slowly and consistently through the entire film without respite. And it’s a tension that is completely believable.

If you haven’t seen this film, do yourself a favor and go watch it. Wait Until Dark is a masterpiece of the genre, something that Hitchcock would’ve been proud to attach his name to. Beyond just being filled with tension and a few great jump scares, it’s also a damn fine film with one of the great performances in the career of Alan Arkin. If you haven’t seen it, don’t read anything more about it. Just watch it and see what a director with a solid sense of aiming for one particular audience mood can do.

Why to watch Wait Until Dark One of the tightest, greatest thrillers ever made.
Why not to watch: Potential heart attacks.