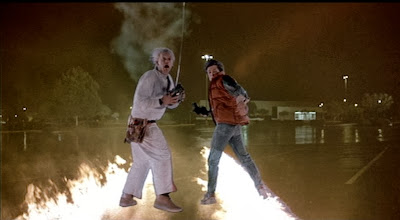 When you watch Back to the Future, there are a few rules that are important to remember. The first one is to remember that this is a film from 1985. The bad guys here are Libyans. There was a short period of time when Libya was one of the major foes of Western style democracy. That, and a few of the jokes (“Gimme a Pepsi Free”) were funny at the time but fall flat now. The second, much more important rule to follow is that you can’t think too hard when you watch Back to the Future. This film goes to some very weird, oedipal places as well as contains some significant temporal paradoxes. The way to handle this is to ignore those parts of the film. Enjoy what’s here for what’s here and don’t worry about the places where it gets creepy. Doing this is the difference between enjoying a fun classic and losing sleep over the implications.

Marty McFly (Michael J. Fox) is a fairly average movie teen with movie-issue problems. His father George (Crispin Glover) is a loser who gets bullied by a co-worker named Biff Tannen (Thomas F. Wilson). His mother Lorraine (Lea Thompson) is dumpy and unpleasant, as are both of his siblings. His family is made up of losers. Despite having an attractive girlfriend named Jennifer Parker (Claudia Wells), Marty has no self-confidence, in part because he comes from a family of known losers. Even his association with local crazy scientist Doc Emmett Brown (Christopher Lloyd) is a source of friction.

Ah, but Doc Brown is something of a genius despite being crazy. As the film opens, he invents a time machine—a literal time machine—and straps it into a DeLorean. Since it needs far more power than it can get from gasoline, Doc Brown has rigged it with a plutonium reactor, getting the nuclear material by stealing it from a group of Libyan terrorists. Just as Doc is about to head into the future, the Libyans find him and attack, gunning him down in the parking lot of a mall. Marty, trying to evade, inadvertently drives the 88 miles per hour necessary to activate the device. Marty heads back in time to 1955.

Once back in time, Marty inadvertently destroys part of his own personal timeline. He interferes in the meeting between his parents, which means he has affected his own possible existence. Now, with only a week before events coincide to get him home, Marty has to repair the damage he’s done to the time stream, figure out how to get the necessary power to travel home, and determine how to save Doc Brown in the future.

Back to the Future is inventive and fun, dealing with the inherent paradoxes of time travel in an extremely entertaining way. It helps tremendously that Michael J. Fox is immediately likable, as is Christopher Lloyd. The temporal issues are touched on just enough to make us care about what is going to happen to Marty without going into anything confusing or technical. By giving us just enough to follow and not so much to get confused, it’s easy to buy into the whole story. Better storytelling through a lack of exposition, essentially, but it really works here.

It’s also a very clever screenplay. While some of the jokes fall flat now, many of them still work perfectly. It’s still an incredibly entertaining film, and it has the ability to entertain those who didn’t grow up in the middle of the 1980s. I watched this with my 10-year-old. She was excited to watch it because she’d already seen it and knew she liked it. Even better, she had very little trouble following along with the story. It’s not every film that can entertain a cynical guy in his 40s as well as his young daughter.

I mentioned at the top that there are some creepy problems with this film. These revolve around the plot point that rather than falling for George, the teenage Lorraine instead falls for Marty, which means that poor Marty is being pursued romantically by his mother. Marty discovers a bunch of things about his mom that no one should know about a parent. Further, any changes Marty makes in the past that affect the future put him in a position when he returns of not knowing family history or personal history. His whole life, much of what everyone else around him knows, is now completely unknown to him—he’s essentially become completely delusional with no way to regain those memories. The world he knew is gone.

But, Back to the Future doesn’t harp on these issues, as it shouldn’t. This is a fun film, one designed not to engage our cerebral cortex but to give us a sense of adventure and fun. That's what it does, and it does it well. The temporal anomalies and paradoxes are weighty things that can be dealt with in serious science fiction. Marty rocking out on stage to a Chuck Berry classic is neither the time nor the place to be concerned with what changes might be wrought in the time stream. Back to the Future has held up as well as any comedy from its decade and far better than most. 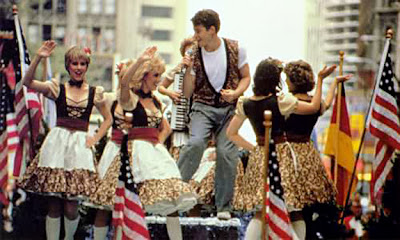 And so we come to what will certainly be controversial: Ferris Bueller’s Day Off. This is a film that is equally as beloved as Back to the Future and for many similar reasons. And it’s a film that I don’t like very much. I don’t think it goes anywhere for one thing. More significantly, since this is a real-world film with no science fiction elements (although for the day the main characters have, the ability to stop time would help explain things), it goes to some really ugly places if you follow the logic past the conclusion of the film.

Ferris Bueller (Matthew Broderick) is a pretty typical high school kid. He doesn’t see the point of going to school and decides that he wants to stay home. He fakes being sick, and in one of many fourth wall breaks, he admits to the audience that faking a fever is bad news because it could cause you to wind up at the doctor’s office. Instead, he goes for clammy hands, which he achieves by licking his palms. His parents (Cindy Pickett and Lyman Ward) accept his sickness and keep him home from school. His sister Jeanie (Jennifer Grey) knows that he’s faking.

Ferris spends his morning pampering himself, then decides to call up his friend Cameron (Alan Ruck), who is legitimately sick and staying home. Cameron is, to coin a phrase, tightly wound, and Ferris would like to break him out of his shell. The two then conspire to get Ferris’s girlfriend Sloane Peterson (Mia Sara) released from school early, something that heightens the suspicions of principal Rooney (Jeffrey Jones), who had decided that his life’s mission is to catch Ferris in the act of something untoward. He bounces a few ideas off his secretary (the underrated and always wonderful Edie McClurg), then heads off to catch Ferris playing hooky. And for whatever reason, people have decided that Ferris isn’t merely ill but is rapidly approaching death’s door, and suddenly the world is concerned for the life of Ferris Bueller.

What comes next is a magical three or four day jaunt compressed into a single day for Ferris, Cameron, and Sloane. They “borrow” Cameron’s father’s prized Ferrari, a car that he never drives or allows anyone to drive. They eat a massively expensive lunch in an upscale restaurant, narrowly missing being caught by Ferris’s father. They go see a Cubs game and Ferris catches a foul ball. They hang out at the Art Institute. They attend a parade in which Ferris makes a spectacle of himself. And then they make it back home in time for a swim and a coming of age for Cameron and then for Ferris to sneak into his bed and pretend he’s been there the whole day. This is certainly not meant to be realistic. Even if they ran through the Art Institute at top speed and stayed for only two innings of the Cubs, they wouldn’t have time to do all of this.

It doesn’t matter. We switch between Ferris and crew and the troubles of his sister and Rooney trying to catch him. Rooney has a very bad day, which includes being attacked multiple times by the Bueller family dog and having his car towed. And, naturally, everything works out perfectly for Ferris. We’re left on a cliffhanger as to what will happen with Cameron, though. It’s unlikely to be a good thing, considering exactly what Cameron does to his father’s prized possession and his own history of caving in the moment anything turns against him.

But enough of all of that. There’s a much bigger issue here than the fact that Cameron is in potentially serious, life-threatening harm from his father and that there’s no way that the three main characters could’ve had the day they claimed without wormhole technology. This larger issue is that Ferris Bueller is a manipulative douche. He’s an arrogant asshole who gets what he wants from everyone by lying, manipulation, and a variety of other unfair tactics. It’s quickly forgotten in the course of this film that Principal Rooney is right the whole damn time. Rooney is just trying to do his job, and in the world of this film, that means that he is punished in every possible way at every possible opportunity.

Ferris Bueller’s Day Off is little more than teenage wish fulfillment. It’s a glorious spectacle of eating one’s cake and having it, too—a grand day out at the expense of other people and regardless of consequences. Ferris can mug for the camera all he wants and claim that he’s doing this for Cameron’s benefit, but is Cameron really better off when the film ends? Based on what we know of his relationship with his father and what his father’s reaction will be to the fate of the Ferrari, do you really think that confrontation will end well? You know who doesn’t care? Ferris doesn’t. After all, he had a great day out, he got what he wanted, and he gets away with it in the end.

I understand a particular love for this film, but it’s a love like that for so many other films must be kindled at the right age. See this in high school, and I can’t imagine not loving it. I saw this much later—while it came out my first year in college, I didn’t see it in the theater. I was older when I first encountered it, and it never fully worked for me because of it. The more I see it now, the more I want to corner Ferris and slap him around for being such a douchebag.

Hate on me all you want. Deep down, you know I’m right. You know that if you couldn’t be Ferris Bueller, you’d probably hate him if you knew him.

Why to watch Back to the Future: A true classic of the genre and the era.
Why not to watch: Thinking about it too much leads down some very ugly paths.