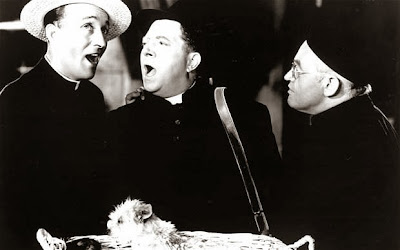 This is a film I vaguely remember as a kid. The local Chicago station (WGN, channel 9) would run family movies on Sundays, and Going My Way was a part of its regular rotation. I have fond memories of many of those movies. I don’t have particularly fond memories of Going My Way. That’s not really fair; the truth is that while I know this is a film I’d seen before, my memories of it are limited pretty much to the song “Swingin’ on a Star” and Der Bingle wearing a priest’s collar.

So I knew heading in that Going My Way was going to be a rough ride for me. There’s a lot in this film that was going to make things difficult for me. First and foremost, it’s a musical, and a musical of the traditional style, starring Bing Crosby, no less. Second, good ol’ Bing plays a priest, which means it’s going to be filled to bursting with God, Jesus, and all the saints. My suspicions were confirmed in the opening couple of minutes when our ultra-Irish main character, Father O’Malley (Crosby) wanders into his new ultra-Irish parish and encounters an angry atheist. Big damn sigh.

Father Charles “Chuck” O’Malley arrives at his new parish of St. Dominic’s in New York as the new curate and assistant to Father Fitzgibbon (Barry Fitzgerald), a crusty old priest who built the church. The almost unspoken truth of the parish is that St. Dominic’s is late on its rent and the banker (Gene Lockhart) is ready to foreclose. Okay, so this doesn’t specifically make a ton of sense to me, knowing how much cheddar the Catholic Church actually has. But for the sake of story, I’ll go along with it. Father O’Malley’s job is to fix things up, get the church on a paying basis again, and do this without the knowledge of Father Fitzgibbon.

Along the way, Father O’Malley has to contend with not just Father Fitzgibbon’s old school ways, but with a local gossip (Anita Sharp-Bolster), a runaway with delusions of singing despite her not knowing what to do with her hands (Jean Heather), and a local gang of kids lead by Tony Scaponi (Stanley Clements) and Herman Langerhanke (Carl Switzer, immediately recognizable as Alfalfa from the “Our Gang” shorts). To help him out, O’Malley enlists the aid of fellow priest and childhood chum Father O’Dowd (Frank McHugh), childhood sweetheart-turned-opera star Genevieve Linden (Rise Stevens), and the church’s housekeeper Mrs. Carmody (Eily Malyon).

And, of course, there are ups and downs. Everyone cantankerous (except for the guy at the start) ends up with something approaching a happy ending. There’s also enough music, almost all of it worked into the script as appropriately as possible, to keep the musical fan happy. Say what you will, Bing Crosby could carry a tune, and he was immediately likable on screen.

Believe me, it couldn’t be a bigger shock. I have to say I enjoyed this film a hell of a lot more than I thought I would. It’s actually very sweet, and while the melodrama and syrup is laid on thick in places, it still works pretty well. A lot of this is, as I’ve said, the fact that Bing Crosby was very likable on screen. Father O’Malley is a nice guy, and the sort of guy you’d want in charge of your spiritual growth. Sure, it’s a little sappy in places. His managing to turn a gang of toughs into a church choir is maybe a little too much to accept without a wink and a nod, but it works well enough for the context of the film.

It’s not all peaches and cream, though. Father O’Dowd is one of those guys who laughs all the time about everything, and a little of him goes a long way. Along the same lines, our runaway singer Carol is a brainless twit and I was never happier watching this than when one of her scenes ended. There’s nothing notably pleasant about her as a character save her ability to handle a tune, and as required by all films of the time, a modicum of talent means that she’ll eventually be a great success.

For all of this, though, Going My Way is surprisingly lively and entertaining. There’s a good chemistry between Crosby and Barry Fitzgerald, no doubt part of the reason they each won an Oscar for this film. It’s also a film that caused a change in the way the Oscars were determined—Fitzgerald was up for both Best Actor and Best Supporting Actor for the same role. After this, it became an either/or situation.

If nothing else, Going My Way gave Bing Crosby a chance to croon a couple of classic tunes and brought the world the song “Swingin’ on a Star,” a song that’s still devilishly catchy. So I liked it. Yeah, I’m as surprised as you are.

Why to watch Going My Way: An upbeat story with upbeat songs.
Why not to watch: A handful of the characters are damned annoying.