Off Script: Jack's Back

Film: Jack’s Back
Format: Streaming video from NetFlix on laptop. 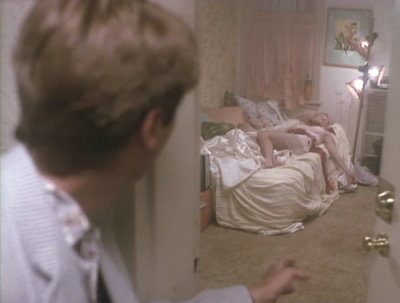 Horror is a subjective genre. What scares one person leaves another one cold. I remember my brother telling me that The Blair Witch Project was one of the scariest films he’d ever seen while other people complained about how disappointed they were in it. To work at all, horror requires a certain amount of buy-in from the audience. If you don’t buy the premise, it’s not going to scare you, no matter what. Often, what makes the difference between a horror or thriller movie that works and one that doesn’t is how much tension it creates in the audience. Where Jack’s Back starts with a great premise, it fails in creating a great deal of tension, which ultimately makes it something of a disappointment.

In the Los Angeles of the time (late 1980s) there has been a rash of killings that almost precisely mimic the Jack the Ripper killings. The current victims match the original victims completely. The police (played by a number of people, and most relevantly by John Wesley and Chris Mulkey) aren’t dumb. This means that they are sure that the next victim will be not only a prostitute, but a pregnant prostitute.

Tellingly, we jump to a medical clinic where a number of medical students and others work. We spend a good deal of time learning all about John Wesford (James Spader), a do-gooder of immense proportions. And, conveniently enough, we meet a customer of the clinic who happens to be both a prostitute and pregnant. If you think this means she’ll be the next victim, give yourself a cookie. As I said, there’s a lack of tension.

In fact, it’s not that difficult to discern precisely who the killer is. We’re pretty safe in guessing that it won’t be John Wesford. We’re equally safe in thinking that it’s probably not the cute and nubile Chris Moscari (Cynthia Gibb). But who is the big hulking guy in the background of the clinic? Oh, that’s Jack Pendler (Rex Ryon). He’s even named Jack. And if we weren’t sure that we’re supposed to think the big hulking guy was the killer, it’s given away when we see him show up at the apartment of the pregnant prostitute a little bit later.

This is where the film tries to get fancy and throw us a curve. John figures out that the prostitute might be in danger and goes to her apartment, finding her dead. And Jack is still there. They fight for a bit and John runs back to the clinic to call for help. Jack follows him, strangles him to death, and rigs him so it looks like a suicide. Twenty-five minutes into the film, and we’ve lost the person that we were pretty sure was going to ultimately be the hero of the film. But no, just as John is wheeled away to the morgue, we are introduced to Rick Wesford (also James Spader), John’s identical twin brother. Rick, through his psychic connection with his twin, saw his brother’s death, knows he didn’t kill himself, and knows what the killer looks like.

This curveball can work if it’s done well. I think about a film like Psycho, for instance. When the shower scene happens and we’re suddenly stripped of what we think is our main character, we immediately latch onto Norman Bates as the most obvious remaining sympathetic character. Here, it doesn’t work at all. We’re a third of the way into the film, invested in the do-gooder doctor, and he’s suddenly stripped away and replaced by his criminal-past-having twin? If we’d been introduced to Rick earlier, it might have worked. Instead, it feels like a completely new story, like we’ve been given a bait-and-switch. The whole setup is completely unsatisfying.

The movie attempts to pull the same kind of trick again, giving us a false ending about 15 minutes before the real ending. This is pretty standard thriller/horror stuff, and like the change up in Psycho, it can work when we’re invested in the characters. But by this time, I had emotionally checked out of the film. The psychic connection between the two brothers is used strictly as a plot device, going nowhere except for where it is directed to go by the plot. Rick even allows himself to be hypnotized, and from this one short sequence, he gleans the identity of the killer. There’s no building of tension; there’s just a hurdle that’s leapt over when the characters come to it.

Worse, when the double-secret ending does arrive, it simply doesn’t fit with the rest of the film. Jack the Ripper targeted prostitutes, so his final target here makes no sense save that the film can’t get away from the cliché of making our potential victim a person we know.

Jack’s Back isn’t a terrible film. I’ve seen plenty worse in almost every genre. No, the problem is that it’s just not a very good film. It’s genuinely difficult to care much about the story playing out in front of us when it feels very much like the characters do things and events happen due to the demands of the plot rather than having the story take shape based on the actions of the characters and the events that surround them. It feels forced, and it ends up pretty lackluster because of it.

Why to watch Jack’s Back: James Spader when he was still fresh-faced and dewy.
Why not to watch: Lack of tension.