Some Kind of Monster

Film: Aileen: Life and Death of a Serial Killer
Format: Streaming video from Hulu+ on laptop. 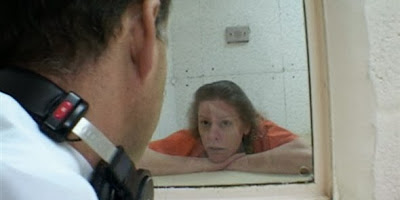 Based on the films on The List, it would be easy to decide that documentarian Nick Broomfield is something of a vulture. Both of his List films deal with the capture, trial, and execution of American serial killer Aileen Wuornos. This film, Aileen: Life and Death of a Serial Killer, picks up 10 years after his first Wuornos documentary, Aileen Wuornos: The Selling of a Serial Killer. Where the first film covered her bizarre trial, the latter film concerns the 18 months or so before her eventual execution, including the last of her appeals. While there is some crossover from the first film, almost all of this is new material.

There’s not a lot to talk about here in terms of story, because this is not a scripted story. Or is it? This is a concept that is touched on in the middle of the film when Broomfield himself takes the stand in a case. This legal case concerned Wuornos’s first trial, which her new lawyer wanted thrown out. Part of the testimony included admissions from her first lawyer that he smoked a vast amount of marijuana before meetings with her. The opposing lawyer brings up footage from the first film, showing that the lawyer in question was wearing two different shirts, indicating an edit and the possibility that the two clips were from different days.

In that sense, in a real way, Nick Broomfield is creating the narrative that we see. True, he is limited to real-world events, but beyond that, the story we get is the story he wants us to get. We see only the footage that he allows and we see it in the order that he presents it. Does this make him suspect? Not specifically, although as with any film, it’s important to remember any motives the filmmaker might have. No matter what, Nick Broomfield is telling us the story he wants with the elements he has to work with.

That story, and it genuinely doesn’t look like it needed much editorializing on his part, is to show the gaping flaw in this part of the American judicial system. He traces back Wuornos’s past, discovering the massive amounts of physical and sexual abuse in her life. She recants her trial testimony that she acted in self-defense and admits that her murders were done in cold blood and with the intent of robbing the victims—and then later recants her recantation. Broomfield’s goal in all of this is to show Aileen Wuornos not as innocent, but as incapable of being held responsible by reason of insanity.

It’s evident through the film that Aileen Wuornos is not interested in saving herself. She wants the death penalty and wants to go through with it. The main questions being asked here are whether or not she should be able to determine her own fate in this way and whether or not the state of Florida has the right to execute someone who is clearly not sane. Wuornos complains through the film about her treatment in prison, and some of those claims appear believable. But it’s impossible to know. Broomfield specifically shows us trial testimony in which she claimed she killed a man for raping her, and the testimony certainly looks convincing on the surface. And yet when the tape stops rolling, she admits that the entire story was a fiction.

Less difficult to judge is her more outlandish claims of attempted mind control by prison officials through the use of radio waves and sonic pressure. Clearly, these are the ravings of a madwoman. Or are they? She evidently had a great deal of skill in manipulating other people and was capable of a convincing act. Perhaps all of the outlandish claims were nothing more than an attempt to appear insane, and thus stave off execution.

Aileen: Life and Death of a Serial Killer is not an easy watch. Sane or not, Aileen Wuornos was a massively disturbed individual who suffered enormous amounts of abuse from her family and the people around her. Did this make her homicidal? Did it drive her insane? Based on what we have here, it’s impossible to tell.

There is a fascination with serial killers. Part of that fascination is the why, which is what Broomfield tries to get at here. There’s certainly more investigating that could be done on Aileen Wuornos. Part of that investigation would need to delve deeper into the cycle of abuse that she suffered in her early life as well as the cycle of exploitation she suffered once she was captured.

The List as it stands now includes this film but has eliminated Broomfield’s film from 10 years earlier. I’m not sure that was a smart idea. There’s precedent for putting more than one film in the same listing, and Aileen: Life and Death of a Serial Killer is a necessary bookend to his first Wuornos film. They are two halves of the same story, and, dare I say it, two halves that should probably be watched together. It’s a scary ride, but it’s one worth taking.

Why to watch Aileen: Life and Death of a Serial Killer: A scary look at a dirty part of the American justice system.
Why not to watch: Real insanity is not pretty. And it’s still not Monster