Boy, You've Been a Naughty Girl 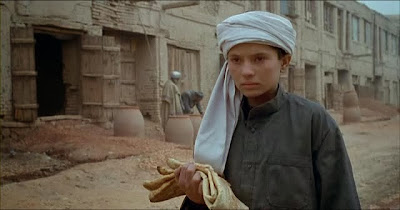 I don’t think I was mentally prepared for Osama. This is not a film to breeze into lightly. The subject is simply too weighty and too tragically real to be anything other than a topic to be viewed with both care and caution. The first film made in Afghanistan after the ouster of the Taliban, Osama is the sort of film that would get director Siddiq Barmak ritually executed for apostasy should the Taliban ever track him down. His output has been pretty sparse; only this film and two others released since 2003, and nothing in the last five years. One hopes Barmak is doing something else or biding his time and not in a shallow, unmarked grave.

The film takes place in Afghanistan after the rise of the Taliban to power. With the Taliban in secure control of the country, the most repressive rules imaginable become enacted as law. Primarily, these laws affect women. No woman is allowed outside of her house without a male escort, and the revealing of any skin at all is more than simply frowned upon.

In this repressive environment, a woman (Zubaida Sahar) lives with her mother and her young daughter (Marina Golbahari). The woman’s husband and brother have been killed in the various wars around the country, leaving them without a man in the house. As the film opens, she works in a hospital, but with the coming of the Taliban, no one in her household is allowed outside without escort, and no man is willing to escort them anywhere for fear of potential impropriety. Even the appearance of moral wrongdoing is as good as an accusation and a guilty verdict.

The solution is to turn the girl into a boy. A short haircut and a change of clothes, and she becomes Osama, an effeminate lad to be sure, but still enough of a boy to pass muster. She gets a job from a man who delivers milk, a former friend of her father’s. While she is always fearful of being discovered, the ruse works for a short time until the Taliban returns to her town and rounds up all of the boys to start training them in the Qur’an and weaponry so they can become jihadi soldiers. “Osama” is rounded up with the boys, and now finds herself in much greater danger, with the threat of discovery being much more severe.

That set up should tell you right away that we probably aren’t due for a happy ending. In fact, with that as the basic premise, a happy ending would only be possible my some extreme turn of events, something that would defy all logic and suspension of disbelief. In the hands of a Hollywood director, that might well be what we’d get here. Instead, we get possibly the most downbeat ending possible, evidence of a fate that is far worse than death.

There’s very little question that Osama is an important film and that it tells a story that is very important in the world the way it is today. What is in question is whether or not Osama is any good. Fortunately, it is. While all of the actors are amateurs, this is not always evident. It all feels very natural, and because of the story, it all feels very real and terrifying.

Osama, while not specifically anti-religion or anti-Islamic, is undoubtedly anti-Taliban. One of the more interesting aspects of the film is the reaction of the average people to the sudden presence of armed religious fundamentalist lunatics in their midst. The minute the Taliban show up in town, the people immediately run and hide, terrified of what might happen to them. Once the Taliban are in town, the people are immediately cowed, willing to do anything necessary to stay alive. The townspeople are forced to watch trials as well as participate in some of the punishments. And they do, out of abject terror of the possible penalties of crossing the Taliban.

Osama is sobering, not because of the terrible oppression of the people (although “terrible” isn’t half of it) but because it’s a modern story. It’s terrifying to realize that this is a story that takes place within my lifetime; this sort of thing still goes on. It’s not difficult for me to imagine my kids into this situation and realize just how horrible it is.

I’m not willing to say that I enjoyed Osama or that I like it. It’s not that kind of a film. It is an important one, and one that I think a lot of people need to see. I’m happy to have seen it, even if it’s not one I’d like to live through again.

Why to watch Osama: A unique modern tale of the dangers of belief.
Why not to watch: An ending as bleak as they come.