She Hired the Rest of Him, Too 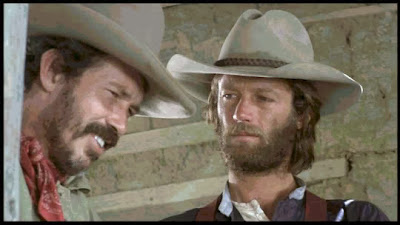 Westerns are not my favorite genre of film. I respect them and when they’re good, they’re really good, but they still are very rarely my first choice of genre. I thought I was done with them, but I shouldn’t be terribly surprised that when the latest version of The List arrived that another Western popped up beyond Django Unchained. The Hired Hand is an unusual one, which is probably why it was added. It plays with many of the tropes of the genre, but does things through the odd point of view of Peter Fonda.

It’s a simple story. Harry Collings (Peter Fonda), Arch Harris (Warren Oates), and Dan Griffen (Robert Pratt) are three drifters. They’ve been on the trail a long time. Dan and Arch want to head to California. Harry decides that he’s had enough of this life and wants to go home. Home, as it turns out, is returning to the wife and child he abandoned years ago. Arch is planning to head to the coast with Dan, but in a flyspeck of a town, Dan shows up suddenly with a few bullets in him, courtesy of McVey (Severn Darden), who claims Dan was attacking his wife. Harry and Arch ride out, but not before they stop by McVey’s place and put a couple of bullets in his feet, crippling him.

So Arch returns to Harry’s old home with him where they encounter Hannah (Verna Bloom), Harry’s estranged wife. She is unwilling to accept his return until he suggest her taking him on as a hired hand to work the farm—no pretend marriage. Over time, the two of them become close again, and it looks like Harry is there to stay. After some time, Arch decides it’s time for him to move on and he heads off for the coast. Shortly thereafter, McVey reappears. He’s captured Arch, proves it by sending along one of Arch’s fingers, and demands that Harry come for a showdown, which is what we get in the third act.

What’s different here is not the story, which is a variation of the old Western standby of a concluding gunfight caused by a grudge. No, the main difference is the slow and steady pace. Clear vistas and rapid-fire action give way to very slow fades and super-imposition shots and extended, almost impressionistic views of the countryside. In a real sense, the film moves at the speed of the relationship between Harry and Hannah. It’s tentative in moving from scene to scene and place to place, almost as if not trying to upset anyone by switching focus.

For all of the plot structure that is taken up with that once-failed, second-attempt relationship between Harry and Hannah, The Hired Hand is very much about male relationships. It’s not homoerotic in the least (at least I didn’t find it so), but what Harry and Arch have is something very much like a marriage. They have spent years together, learning each other’s personalities and preferences. They know each other perfectly, so Harry’s decision to return to his former life is not unlike a divorce between the two men.

Hannah even expresses this when Arch decides to leave. Harry wants him to stay, but Hannah is ready to see him go. She says something to the effect that Arch is why Harry left in the first place—he wanted that sort of relationship with someone, someone with whom he could be completely comfortable. She compares Arch staying on their homestead with the equivalent of Harry bringing home another woman and wanting her to stay in the spare bedroom, and pretending like nothing had changed. It’s an astute observation, because that is very much how the relationship comes across.

If there is a problem here, it’s very much the third act. The conclusion we get is completely unsatisfying, and while it makes sense in terms of something that could happen, it doesn’t make a great deal of movie sense. It also contains what is probably the fastest and sloppiest gunfight in film history, sloppy because Arch ends up trying to shoot with a finger missing.

In plainer terms, I rather appreciated The Hired Hand up until the moment that Harry actually rides off to rescue his friend. I don’t completely buy the relationship between Hannah and Harry—even at the pace it goes she’s far too quick to bring him back into her bed. But I can overlook things like that when it’s done for the sake of moving the plot forward. What I can’t overlook is an ending that might be real, but leaves the previous two acts of the film feeling meaningless. We watch films because they offer us closure and stories that come to a genuine end. If we wanted them to be exactly like life, we wouldn’t need to watch them.

And so, The Hired Hand first demonstrates what an art film would look like with spurs and a cowboy hat, and then, essentially, shits the bed.

Why to watch The Hired Hand: A Western at a pace that works for it.
Why not to watch: The end isn’t particularly satisfying.