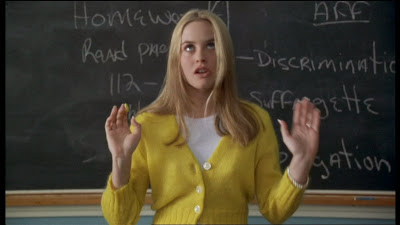 Before I talk at length about Clueless, let’s have a moment of silence for the career of Alicia Silverstone. She was just starting to take off, with Clueless as her official Launchpad and then tragedy struck: Batman & Robin. She’s barely been seen since. There are tragedies like the death of actress Brittany Murphy and then there are tragedies like the death of Alicia Silverstone’s career. Please, a moment if you will.

Anyway. I freely admit that I left Clueless unwatched until now because I frankly didn’t want to watch it. I was familiar enough with the story that I knew I’d have some problems with it. Sure, it’s based on a classic piece of literature, and sure it has a lot going for it and some excellent comedy moments, but it’s also populated by an entire cast of vapid people—the characters, not specifically the actors. I hate vapid, so I’m not sure I’m ever prepared to hunker down for 100 straight minutes of it.

Cher (Alicia Silverstone) is a fashion-conscious, self-obsessed California teen who rules the local high school social scene with her best friend Dionne (Stacey Dash). Cher’s father (Dan Hedaya) is a high-priced litigator, allowing Cher to live a life of complete privilege. The biggest fly in her personal ointment is her former step-brother Josh (Paul Rudd), who constantly teases her about her shallow existence. Cher has a habit of doing poorly in school and then arguing her way into higher grades. To make this easier, she decides to add some joy into the lives of two of her teachers, Miss Geist (Twink Caplan) and Mr. Hall (Wallace Shawn). Through careful matchmaking, she gets them interested in each other, and suddenly the two teachers are happy enough that they go easier on their classes.

Despite her good-deed-doing being done mainly for personal gain, Cher decides that she likes doing things for other people. As her next project, she takes on Tai (Brittany Murphy), a newly transferred student who is hopelessly out of place in California. Under Cher’s tutelage, Tai becomes the belle of the school, and thanks to what passes for a crisis in this film, is suddenly more popular than Cher herself. And when Tai decides to set her sights on Josh, troubles arise.

As the story indicates, Clueless is fluff, but it’s well-pedigreed fluff. It’s based on Emma, the Jane Austin novel, so the roots of the story run pretty deep. And, for all its fluffiness and the mental ciphers that make up its characters, it’s a smart update to the story. Certainly this is a film that would work as a period piece (and it’s been done as one), but moving a classic story into the current era is always fun when it’s done cleverly and with solid writing and wit. And Clueless has that.

The biggest potential objection is one that a lot of people will not see as a problem. In truth, I see it only as a potential problem. This is the aforementioned fluffy vapidity of the entire affair. These are characters who suffer massive existential trauma over not having the right shoes to wear with a designer outfit. It’s important to make this distinction—the characters aren’t specifically stupid; they’re simply utterly shallow. Typically, that’s a significant problem for me, but it’s less of one here because this shallowness, this entire lack of an interior life, is what the film uses to play for comedy. And because the writing is very smart, a great deal of that comedy works very well. It is called “Clueless,” after all.

And that, more or less, is the key to watching and enjoying Clueless. Turn off your brain at the outset and let the film wash over you. The performances are pitch perfect for what it wants to be, the story is fun, and even the complete lack of substance of the characters and the plot becomes enjoyable after you get acclimated to it.

I don’t love Clueless, but I do understand exactly what it is. It’s a cream puff of a film. It’s not only something you laugh with, it’s something you can laugh at. These are characters with no growth or much potential for growth, and that’s okay. It’s all silly and stupid and has a Hollywood ending it doesn’t deserve, and that’s okay, too. Just don’t look for any depth. Of course, that’s pretty much true of the source material, so that’s not a huge surprise.

Why to watch Clueless: A classic story in new clothes.
Why not to watch: Vapidity.