I’m doing this to myself two days in a row. Yesterday, I got all weepy over an animated film for children because it ended in the most bittersweet way I could imagine. Today, I’m weepy for the exact same reason, but Amour is no film for kids. It is, as the title suggests, a film about love—about real, true, and deep love.

I want to be clear on this. Amour is not about movie love, the kind that makes someone do something embarrassing and foolish to win the girl of his dreams or chase someone halfway across the world because of an infatuation. This is about the real thing, the pain, the sacrifice, what it really means to truly love someone and love them more than you love your own life. It’s about the terrible (in its original sense) power that love can hold over us and what love will cause us to do when it is all that matters to us.

Like many films, Amour opens with the ending. Police break into an apartment and find the body of a woman surrounded by flowers on her bed. From this, we see the months preceding this eventual conclusion. The story is that of Anne (Emmanuelle Riva) and Georges (Jean-Louis Trintignant), an old married couple. Both are retired piano teachers, and as the story begins, we see them attending a concert given by a former student.

The next morning, at breakfast, Anne suffers a stroke in complete silence. Neither of them are sure what has happened; she suddenly becomes unable to speak or communicate for a few minutes. Medical tests reveal a blockage in her carotid artery, but the surgery is not successful, and Anne becomes paralyzed down her right side.

Anne’s greatest fear is returning to the hospital or winding up in a home, and George promises her that he will take care of her rather than subject her to that. Despite his willingness to take care of her and deal with her physical therapy, Anne becomes depressed over the state of her life and wants to die. A second stroke leaves her almost completely incapacitated and unable to speak. Their daughter Eva (Isabelle Huppert) tries to convince Georges to have her placed in an institution since he cannot properly care for her, but he maintains that he made a promise never to abandon her in that way. He hires a nurse to help, and temporarily employs a second nurse to take some of the load, but the demands of caring for Anne properly are impossible for him and are also a terrible mental and emotional strain.

Like a lot of Michael Haneke’s work that I’ve seen, Amour is designed to be emotionally difficult. But it’s also different from other Haneke films with which I am familiar. Funny Games played with the audience’s expectations and sensibilities. The White Ribbon played with notions of guilt and innocence. Amour is brutally emotional, open and raw, but it also displays a depth of emotion and of tenderness that I didn’t expect from Haneke. I expected difficult to sit through. I didn’t expect it to be so difficult because of the emotional attachment to the characters.

There’s a myth, probably based in reality somewhere, about an old couple, one of whom dies. The other follows in death a week later, unable to survive. That’s the sort of love that Amour is about, a love so deep and enduring and powerful that it transcends everything else.

It’s also a film about dignity. While we see very little of Anne where she isn’t physically affected by her condition, it’s evident that this is a woman of enormous personal dignity. Her illness has stripped this away from her, leaving her almost infantile. It’s a terrible thing, the sort of thing on which nightmares are based. Suddenly, after a lifetime, she is unable to care for herself in even the smallest way or communicate her needs. It’s mortifying and terrible, and extremely human and real. That it is so real is what makes it so terrible.

The film is also smart enough to not force us to see Anne go through many of her issues. They simply happen off screen and we see the results. Suddenly she is paralyzed on one side and we learn though conversation that the operation on her carotid artery has not worked. She goes from being in a motorized wheelchair to suddenly being bedridden with a second stroke, one that we (thankfully) do not have to witness.

I’ve said before that I’ve never liked a single character played by Isabelle Huppert, and that holds true for Amour as well. Don’t take that to mean that I dislike her as an actor or that I dislike every film she is in because that’s simply not the case. She plays characters that are easy for me to dislike and does it damn well more often than not. That’s the case here, too, although this is the closest I've ever come to sympathizing with the character she plays; I understand Eva even if she is incapable of understanding her father. I can’t fathom why she didn’t merit an Oscar nod. The same can be said of Jean-Louis Tringitnant, who has never been better. Georges suffers everything Anne does with the added weight of being responsible for her, and it’s evident just how much all of this ages him in the course of the film.

And then there is Emmanuelle Riva in one of the most heartbreaking performances I have ever experienced. I have no way to express how affecting her performance is. It must be witnessed.

This says it all. 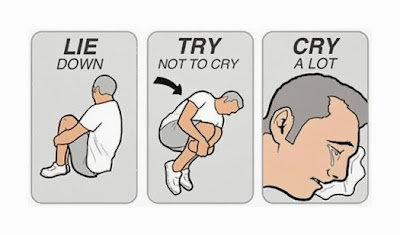 Why to watch Amour: It is one of the most beautiful and painful things ever made.
Why not to watch: There’s still all that damn dust around here preventing me from answering.

Posted by SJHoneywell at 7:31 PM