Film: The Exiles
Format: DVD from NetFlix on laptop. 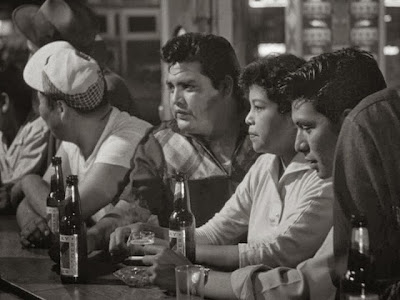 The Exiles is one of those films that I dread when it comes to the review. Doing a lot of films I knew relatively well early on put me in the particular corner of writing to a general length on these, and I’ve been consistent. I can’t, now that I’m two dozen or so films away from finishing, change the formula now. Okay, I could, but it would feel like cheating. The issue with The Exiles is that nothing really happens. Director Kent MacKenzie follows a group of people around for a night and films the nothing that happens. Roll credits.

Okay, it’s a little more than that but not much more. The main thing I left out is that the people we follow around are all Native Americans who have left the reservation and fled to Los Angeles in search of something better/more/different. While there is a group of people we spend time with, the bulk of the running time of the film concerns Yvonne Williams, Homer Nish, and Tommy Reynolds.

Yvonne is pregnant, and while it’s not completely clear (or I just missed it from allowing my mind to wander while watching this), she is married to Homer. Again, I think she’s married to Homer. I’m not entirely sure. Yvonne spends her day window shopping, making dinner for Homer and his friends, and being left on her own. Homer happily abandons Yvonne to go out with his friends. They drink, play cards, cause trouble, and eventually congregate in the hills above Los Angeles to engage in something much like a powwow.

Part of the film is straight documentary. We see the subjects of the film walking around Los Angeles, drinking, smoking, getting in a fight here and there, playing cards and trying to pick up women. While we watch, we hear voiceover of the people themselves talking about their lives in the city as well as on the reservation. Some of this is poignant and sad, but most of it makes all of these people look pathetic. The only one of them I have any sympathy for is Yvonne because she is so readily and easily abandoned by everyone else. But even with her, she’s not bright or capable enough to do anything about it but endure. Homer comes off as a complete douchenozzle, as does just about everyone else. The rest consists of “action” sequences of the people going through their night, with the dialogue obviously dubbed in. If you’re a Mystery Science Theater 3000 fan, this dubbing will remind you of the films of Coleman Francis.

This could have been a very interesting film. There are real issues to deal with in the Native American community today just as there were 50 years ago when this film was made. While there’s much more awareness now if nothing else, there are still significant things to deal with in the American treatment of the native people. The best way to raise this consciousness and move the dialogue is not by showing those people as drunken losers who abandon their families in pursuit of a good time.

The skinny on The Exiles is that it couldn’t find a distributor back in the early ‘60s, so the film languished unreleased and virtually unseen. It was discovered and restored in 2008 and finally released at a festival and then commercially later in the same year. Almost immediately, The Exiles was snapped up by the Library of Congress to add to the National Film Registry. After nearly 50 years of hiding under a bushel basket, suddenly The Exiles is the darling of the film world.

Now, I have no way to prove what I’m about to say, but I think I can make a case for it. The reason this film was added to the Registry and in fact the reason it was added to the 1001 List is because it was such an obscurity for so damn long. Had The Exiles found a distributor in 1961, it would still have its fans and champions, but they wouldn’t be this adamant to convince the cinephile masses that this going-nowhere drag of an evening is actually worthy of much consideration. It’s dull and pointless and almost purposefully destroys any message it might want to present.

Easily the best part of this film is the soundtrack. It’s fun to hear late 1950s rock in its own native environment, and when I wasn’t being annoyed by the stilted and wooden dubbing, I enjoyed the tunes quite a bit.

Why to watch The Exiles: Rockin’ soundtrack.
Why not to watch: Dull as dishwater.

Posted by SJHoneywell at 7:12 PM