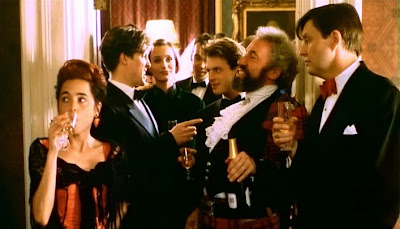 Every genre has its clichés. I’d suggest that a genre can in many ways be defined by its clichés better than by any other elements. For romantic comedies, one of the clichés is the imperfect person looking for love. After all, if the lonely heart was perfect, there’d be no reason for him or her to not have someone already, right? The issue is making that person likable, someone we want to root for and see find happiness and romance without making them such an ideal person that the premise isn’t destroyed from the outset. Because of this, the most common personality issue for a rom-com main character is being a physical or social klutz. Most of us can sympathize with being clumsy or awkward in some situations, so makers of films like Four Weddings and a Funeral have an obvious way to make the main character both likable and significantly imperfect.

As per the title, the film is entirely concerned with five particular events, the titular four weddings and single funeral. At each of these, in one respect or another, Charles will encounter Carrie. The film maps the ups and significant downs of their relationship in the context of these weddings and the funeral, cleverly including their own weddings to other people. Don’t worry—that’s not a spoiler. After all, the third wedding we see is Carrie’s, which also happens to be the point at which Charles realizes he is in love with her.

This conceit of having the relationship play out over time like this, is one of the things that makes this film work as well as it does. Another, without question, is the presence of Gareth (Simon Callow) who is the most purely comic presence in the film. He’s flamboyant, with his loud and garish waistcoats, opinionated, loud, and screamingly gay, and he’s pure joy. His partner Matthew is played by John Hannah in one of his first films, and I’m always a fan of John Hannah in just about anything he appears in.

It also helps significantly that Hugh Grant is particularly likeable in this film. Four Weddings and a Funeral was made in the early part of Grant’s career when his trademark was being what my wife would call “adorkable,” following it with a giggle. His film persona was that of a bumbling, stuttering romantic, and I can’t think of a film in which he nails that particular role better than in this one.

But not everything is perfect in this wedded bliss. The largest problem for me is the presence of Andie MacDowell, who I have liked only in Groundhog Day, and there mostly because the rest of the film is so damn charming. I don’t generally find a lot to like about Andie MacDowell. She’s pretty enough, but her voice grates on me, and she always comes off as wooden to me. She is one of those actors that, when I see her, I wonder why the people who did the casting didn’t find somebody else. She grates on me like few others I can think of (Keanu Reeves comes to mind, though).

The bigger issue for me is the vast improbability of the whole thing. Charles and Carrie meet once and sleep together. They meet a second time and he’s completely in love with her and she returns his feelings despite her being engaged to someone else. Meanwhile, Charles’s friend Fiona (Kristin Scott Thomas) has carried a torch for Charles pretty much the whole time they have known each other. Why does this happen? It happens because evidently Charles needs the “thunderbolt” moment to feel anything. I’d believe infatuation, or lust, or any number of other possibilities, but love? This is romantic bullshit. I don’t buy the relationship for a moment, and for a romantic comedy, that’s a significant problem.

Those two problems can be overlooked. You may well appreciate the vacant charms of Andie MacDowell and want to buy into the romantic ideal. The larger, much more difficult to overcome problem is the size of the principal cast. The Ten Commandments had a smaller cast. The heartstring moment when Fiona admits her love for Charles is far less poignant than it could be, because I barely remember her in the film before that moment. For all I knew, that could’ve been her first scene.

On the rom-com scale, Four Weddings and a Funeral is better than most. Despite it being wildly improbable (at best) and the corniness in places, it’s also very smartly written and entertaining. It helps greatly that Hugh Grant in his stuttering, bumbling rom-com phase was almost instantly likable, as are most of the characters (aside from Andie MacDowell, that is). I’ve endured quite a few worse than this one, and not been privy to many that are better, at least in terms of a genre I generally dislike.

Why to watch Four Weddings and a Funeral: It’s smarter than you might expect a rom-com to be.
Why not to watch: It doesn’t avoid all of the clichés of the genre.

Posted by SJHoneywell at 7:02 PM