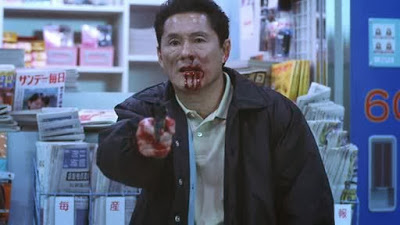 I was introduced to “Beat” Takeshi Kitano with the film Gohatto. He was my favorite part of the film. That boded well for Hana-bi (Fireworks), a film that was written by him, directed by him, and stars him. There’s a gravitas to him that few actors can equal, although I’m reminded of David Gulpilil in terms of his on-screen weight. He manages to at once be solemn, brutal, and tragic. I guess in that respect, he also reminds me of Ulrich Muhe, while at other times he reminds me of a Japanese De Niro. In Hana-bi, he plays an ex-cop plagued by a series of problems that see him slowly spiraling into deeper and deeper problems.

Yoshitaka Nishi (Kitano) is a cop who has had a terrible string of luck. First, before the start of the film, his young daughter dies tragically. Next, his wife Miyuki (Kayoko Kishimoto) is stricken with leukemia and the prognosis is less than favorable. Third, and this is the straw that finally does him in, Nishi’s partner Horibe (Ren Ohsugi) is paralyzed when he is shot by a criminal while Nishi is visiting his wife in the hospital. With the injury to Horibe, Nishi retires to spend time with his ailing wife. The lack of income forces him to borrow money from the Yakuza—money he can’t pay back.

We also spend a lot of time with Horibe, who takes up painting. Horibe’s injury leaves him completely alone; his confinement in a wheelchair causes his wife to leave him and take the child with her. We see a number of Horibe’s paintings, which are oddly beautiful and surreal, and usually feature animals or people with flowers in place of their heads or eyes. In truth, even the paintings are Kitano’s, painted years earlier while he recovered from an accident.

For his part, Nishi makes some interesting choices. He starts hanging around a junkyard and notices that there is an old police light bar. He gets it and also buys a used taxi which he repaints to look like a police car. Using this and his old police uniform, he robs a bank and takes his wife away on a trip and uses the bulk to pay off the Yakuza.

This is a film that seems oddly unfocused in many places. Things just happen with absolutely no explanation. At one point, Nishi and his wife are on their vacation. Miyuki is putting water in a vase, but the flowers in the vase are already dead. A man standing near her tells her that the flowers are dead and that she should bother, eventually asking her if she is deficient. Nishi shows up and beats the hell out of the guy for pretty much no reason. This happens over and over. Based on this film, a Yakuza’s job is to commit crimes and regularly get their asses handed to them by ex-cops on a regular basis.

And that’s another issue I had with the film. Nishi the ex-cop is up to his neck in debt to the Japanese mob. When the mob sends goons to Nishi to collect, he regularly and routinely hits them, sometimes causing real damage. We never get the impression that Nishi borrowed enough for there to be a massive debt, but there’s a debt nonetheless and Nishi treats the Yakuza flunkies the they’re trying to steal from him. Typically, that would mean the mob will send out a hit squad on you if only to scare their other victims. But not here.

There are moments of strange and surreal beauty and comedy here. The pictures fulfill that role, of course, but there are other moments as well. Nishi and his wife attempt to take a picture with the camera timer only to have a car drive through the shot just as the camera snaps. There are some gorgeous landscapes, too. If nothing else, this is a pretty film and Kitano has a great eye for scenery and landscapes.

All that’s well and good, but this was not a film I enjoyed. I didn’t like at all the way it was put together. For starters, in the opening, people offer painfully stilted, exposition-heavy dialogue that never really works the way it’s supposed to. Characters who have worked together for years offer up lines that are specifically there to bring us up to speed on the characters’ lives. We get weird dialogue that exists only to make with the backstory.

Second, the music is wildly inappropriate, and sounds exactly like the music from a pilot episode of something produced by Quinn Martin in the late 1970s. Lots of almost-disco strings that simply don’t work for a film of this era.

I’ll be blunt—maybe I’m missing something, but this didn’t work for me at all. There’s unexplained violence out of nowhere that isn’t even explained after the fact. Worse, there’s so little happening through chunks of the film that I fell asleep toward the end and had to go back and watch it again.

I’ll also say that the ending is quite a shock, but it’s not enough to save the picture for me. I was hoping for something that wasn’t just senseless violence. Hana-bi does have some more artistic passages but most of it doesn’t do it for me.

Why to watch Hana-bi: The artwork is awesome.
Why not to watch: It doesn’t always make a lot of sense and the music is awful.