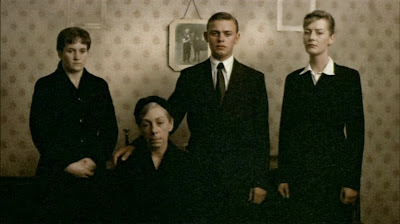 I had been warned about Distant Voices, Still Lives, but that didn’t change the fact that I still had to watch it to complete this particular journey. I wasn’t aware until the film started that it featured the acting of Pete Postlethwaite, who I genuinely like. One of the reasons I like him is because he’s a hell of an actor. The other is that he doesn’t look like one. So I went into this with a positive and a negative, which is pretty much like going into it cold.

It’s worth noting that this is actually two films that are evidently always viewed together. The two films, naturally named Distant Voices and Still Lives, are always offered together. Each is roughly 40 minutes long, although it’s difficult to tell because there’s not a specific break between the two. What is the most likely break is about 43 minutes in. The two films take place two years apart, and director Terence Davies filmed them two years apart with the same cast and crew. It’s an interesting idea.

I’m not going to beat around the bush here. This is a singularly unpleasant film experience, particularly for the first 40 minutes, and most of that unpleasantness comes specifically from the character of Postlethwaite. That was my take away from the Distant Voices section of the film—the father character in this film family is a complete asshat. He’s abusive in almost any way that can be thought of. Eventually he dies. We see all of this in flashback, because this takes place at the wedding of Eileen (Angela Walsh), one of his daughters. We see all of the abuse as memories of Eileen and her siblings Maisie (Lorraine Ashbourne) and Tony (Dean Williams). For whatever reason, Eileen is upset that her father can’t be there for her wedding. No one else seems terribly upset, including the abused and mousey matriarch of the family (Freda Dowie).

Still Lives picks up, as mentioned, two years later. Not much has changed. The two daughters as well as their friends have ended up in the same sort of relationships as their mother. These are all relationships based on aggression. The men are small-minded and stupid and the women are small-minded and dense. Everyone fights all the time. When they’re not fighting, they’re hanging out in the local pub singing. There’s a shit-ton of singing in this film.

Evidently, a great deal of these two conjoined films is autobiographical, based on the life and memories of director Davies of his life in 1940s and ‘50s Liverpool. I read that in the description of the film and nod sagely, then think, “And?” So what that it was based on Davies’s memories. I have memories of being a kid, too, and of seeing fights between people and arguments and funerals and weddings. And? I’m not sure those memories are worth a film. In fact, I’d say they pretty much aren’t, because I don’t have some grand story to tell.

What’s the point of that digression? Terence Davies doesn’t have a grand story to tell here, either. It’s just people fighting and yelling and singing. That we get a wedding in each film means very little to me. People get married. People sing. People drink. I sat through the 80 minutes of this film and walked away with pretty much the exact same knowledge, opinion, etc. that I had walking in. I learned nothing and gained nothing.

Distant Voices, Still Lives is like having coffee with someone you haven’t seen in a long time. Halfway through, you realize that you never liked that person in the first place, but they just won’t shut up. Or, if you prefer, it’s like going to a high school reunion and realizing that you’ve wasted your money because what memories you have to share with the other attendees aren’t worth recalling.

Why to watch Distant Voices, Still Lives: The idea behind the creation is pretty cool.
Why not to watch: It’s genuinely unpleasant.

Posted by SJHoneywell at 6:17 PM