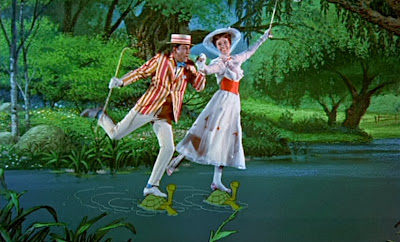 I can’t say that I was terribly surprised when Mary Poppins arrived on the table with the List reboot. I also can’t pretend to say that I was overjoyed at the prospect. I’m pretty sure I’d seen it before, but equally sure it had been more than three decades since I’d seen it. There’s a lot of singing and a lot of cheery nonsense and a great deal of how children should be and how parents should be without touching anything near the reality of what parents and children are. In other words, it’s a Disney film from that time in the past when Disney films meant wholesome childhood entertainment on the surface and disturbing life lesson buried deep down inside. Wait, that’s pretty much non-Pixar Disney even now.

Anyway, the thing that most people remember about Mary Poppins is Dick Van Dyke’s execrable accent. I have two things to say about that. First, it’s absolutely true that Van Dyke’s attempt to sound something like a Cockney is the very definition of embarrassing. Did no one tell him? Did they watch the dailies with the sound off? My 10-year-old does a better one. Second, it’s not by a damn sight the most unfortunate part of this film.

Things are amiss in the Banks home. Mr. Banks (David Tomlinson) is a banker and likes his home to be run on time and the way he likes it. His wife (Glynis Johns) is a suffragette and doesn’t have time for her two children. This is why they have a nanny, a woman named Katie Nanna (Elsa Lanchester), who starts the movie by quitting her job. The kids have run off again.

She leaves and the children arrive. They are Jane (Karen Dotrice) and Michael (Matthew Garber), and like all movie children of the age, they are precocious and cute (although quite frankly, Matthew Garber’s head is shaped exactly like a garlic bulb). They battle with their father over what they want in a new nanny. He wants discipline. They want someone fun, and the song they sing about their perfect nanny naturally includes physical specifications. This is, after all, a Disney film, and in the world of Disney, ugly equals evil.

The next day, a whole slew of nannies show up for work, but a giant wind blows them all away, because the only nanny for the job is Mary Poppins (Julie Andrews). She’s everything everyone wants in a nanny—she is precisely what the kids have asked for, and she doesn’t shirk on the discipline, either. She’s also laden with magical powers, evidenced by her flying in on an umbrella, ability to slide up banisters, and to make toys put themselves away by snapping her fingers. For the next however many days, she leads the kids on magical adventures, taking them into cartoon worlds that exist inside the chalk paintings of her friend Bert (Dick Van Dyke).

Anyway, the whole point of Mary Poppins is that the kids learn a little discipline, one supposes, although it seems that all they do is run around in fairlyland with their magical nanny. The real point of the film is to teach their father to be something other than the serious stick-in-the-mud that he is. That’s the point of many a kids’ film, of course. There’s nothing wrong with the kids. It’s always the adults who need to learn that life isn’t about money and work.

I understand how a child could watch this film and be entranced by it, but I do not for the life of me understand how an adult could have the same reaction. Certainly there are parts that are fun and funny, and despite his varying and terrible accent, Dick Van Dyke is often the best part of what’s going on on screen. The same cannot be said for anyone else (the animation is sometimes the best thing to see, too). Julie Andrews, who won an Oscar for this role, has a great singing voice. That’s it. Mary Poppins as a character, despite all of the magic and whimsy, is a conceited snob. The kids are pretty much there as spectators for everything that goes on around them and are here only because they have to be.

Suffice to say that I didn’t like Mary Poppins. Further, it’s not a film I’d really want my kids to watch. See, sometimes I have to be business-like and efficient. I can’t always go run off and fly kites. I need to pay bills. Like many kids’ films of its era, Mary Poppins creates unreal expectations and espouses an unreal ideology.

Years ago, Mary Poppins herself would’ve been burned as a witch. Oh, to have this set in those times!

Why to watch Mary Poppins You already know most of the songs.
Why not to watch: A diabetic coma is a real possibility.

Posted by SJHoneywell at 6:34 PM