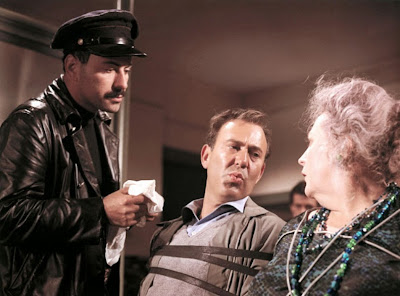 Turner Classic Movies has a service that allows people with particular satellite or cable packages to watch a collection of movies online or on a smart phone. I thought I’d check it out. There aren’t a ton of films on my lists available at the moment, but it’s always good to check out a new service. One of the films available for a few more days is The Russians are Coming, the Russians are Coming, which is a “very long wait” film on NetFlix. It seemed like a good choice.

It’s a good bet with a title like this one that we’re not going to be spending a lot of time dealing with heavy drama. We’re not. This is a farce, and it was made in a time when people knew how to make farces, particularly when it came to international conflict. This is from a couple of years after Dr. Strangelove and a few years before Catch-22 and M*A*S*H, after all.

Like any good farce, the set-up is incredibly simple. A Russian submarine is scouting the American coast. The captain (Theodore Bikel) wants a better look at the country. Despite warnings from his crew, the captain manages to beach the sub on a sandbar, stranding it. With no other options, a small portion of the crew, led by Lieutenant Rozanov (Alan Arkin), heads to the island in the hopes of finding a boat to help pull the sub back into the water. And, of course, it all goes to hell.

It starts at the summer house of the Whittakers. Walt Whittaker (Carl Reiner) is a playwright spending time with his wife Elspeth (Eva Marie Saint) and kids. The Russians show up, really just looking for some help, but when prompted by amazingly annoying nine-year-old Pete Whittaker (Sheldon Collins), they admit to being Russian, draw guns, and take the family hostage. All they really want is a boat, but to get to the harbor, they are forced to steal the family car. They leave behind Alexei Kolchin (John Phillip Law) to stand guard over the family.

Of course, the car breaks down, which leads the Russian crew to steal one from the postmistress. They’re forced to tie her up to get the car. When she’s eventually released, it starts a panic around the little island the Russians have landed on. Rumors of paratroopers, armed incursions and the like start up. The police chief Link Mattocks (Brian Keith) discovers he can’t control the rumors in part thanks to the rabble rousing of resident Fendall Hawins (Paul Ford) and the incompetence of his assistant, Norman Jones (Jonathan Winters). Throw into the mix a sudden love story between the abandoned Russian Alexei and the Whittaker’s babysitter Alison (Andrea Dromm) and you have a lot of potential for comedy.

The Russians are Coming, the Russians are Coming doesn’t always go for huge laughs. Instead, it goes for something like a controlled chaos. It’s tuned very finely. There are any number of moments in the film that could easily become tragic with a small tweak one way or another. It manages to stay firmly in the world of comedy because it is so carefully controlled all the way through. It looks like chaos, but Norman Jewison always knows exactly what is going on the whole time.

What we get, then, is a comedy that is funny in its intent but not funny in the specific. There are moments of humor throughout, but most of the comedy here is the situation and not what is specifically happening on screen. I’m not exactly sure how that works, but the gags themselves, and there are a few, didn’t make me laugh. It’s the ridiculousness of the situation that makes the whole thing tick.

Because of this, this film (I’m seriously tired of typing the name) is an artifact of its time, and not nearly as amusing now as it was 40 years ago or so. It’s pretty harmless and it’s got some fun performances. It’s fun to see Carl Reiner, for instance, and I’m never averse to watching Alan Arkin in his prime. It just hasn’t grown old gracefully, and that’s a shame.