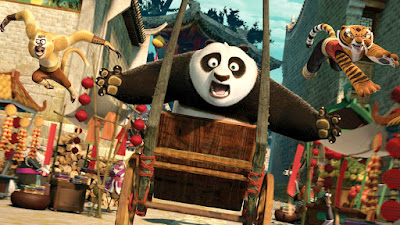 I probably had too high of hopes for Kung Fu Panda 2. The original Kung Fu Panda is my choice for the best animated feature film of 2008 (see here) and would rank pretty high in my list of favorite animated films. It’s not a perfect film, but lately, many sequels have the habit of improving on the original film in notable ways. I wanted more from the secondary characters in the first film; that was my main complaint. Sadly, it’s my main complaint from the sequel as well.

Kung Fu Panda 2 delve much more deeply into the backstory of Po the Panda (Jack Black), the newly-minted Dragon Warrior, which makes him essentially the defender of Kung Fu. He is assisted in his task of destroying evil and defending the good and helpless by the same five martial arts masters he idolized as a child: Tigress (Angelina Jolie), Mantis (Seth Rogen), Monkey (Jackie Chan), Viper (Lucy Liu), and Crane (David Cross). He is still under the tutelage of Master Shifu (Dustin Hoffman), who is alternately pleased with and frustrated by Po.

What’s in question here is Po’s history. He was raised by a goose named Mr. Ping (James Hong), so it’s evident that he was adopted. The fact that Po was adopted by Mr. Ping is played for comedy in this film (it comes as a shock to Po). This becomes important when the wolf army of a peacock named Shen (Gary Oldman) raids the nearby village for its metal and Po suffers a flashback from his childhood when he sees the emblem on the wolves’ uniforms.

Shen is attempting to take over all of China through the use of a new weapon, a sort of cannon that launches weaponized fireworks. He is guided frustratingly by a soothsayer (Michelle Yeoh). In his quest to rule everyone and destroy Kung Fu to maintain a position of dominance, Shen reclaims Gongmen City, his ancestral home. In the process, he kills the leader of the city’s council, Master Rhino (Victor Garber) and imprisons Masters Croc (Jean-Claude Van Damme) and Master Ox (Dennis Haysbert). So, the quest becomes one to free Gongmen City, defeat Shen, destroy Shen’s weapons, and, ultimately, to discover Po’s past and how he came to be adopted by Mr. Ping.

The adventure aspects of Kung Fu Panda 2 work as well in this movie as they did in the original. There are some massive battle sequences that work beautifully in animation, and the animation itself is lovely. I also like that when we slip into Po’s memories or dreams that the animation style changes completely. When he finally recovers a solid memory of the night he was abandoned (sort of) by his parents, the animation style shifts from the cruder, more cartoonish style to the main style of the film, serving as a subtle indication that Po has finally understood his past.

There’s also a lovely emotional moment near the end of the film between Po and Mr. Ping. As with the first film, it could have very easily become something sappy and maudlin, but it instead comes across as honest and heartfelt.

But there are issues here as well, and there are more of them in this sequel than in the original film. First is that so much time is spent on Po and Shen that all of the other characters are given short shrift. Master Shifu, who was a major character (and a personal favorite) in the first film is only in a couple of scenes here. Tigress takes a much more prominent role here, which is great, but the other four members of the Furious Five are much less prominent. Mantis gets a few lines as does Monkey, but Viper and Crane are almost non-entities. There’s an opportunity to make these characters much more a part of the film and much more interesting that is simply missed. The main reason for this is that Kung Fu Panda 2 is almost criminally short, clocking in at 90 minutes, with a full 10 minutes of that being credits. This could easily use another 10 minutes or so to include more information on the characters that should be important in the world of the story.

A second issue here is the philosophy. Kung Fu Panda contains these great, almost inexpressible hints of Eastern philosophy concerning the nature of desire and freedom. Here, Po’s quest is all about a search for inner peace, and he seems to come to it far too easily, almost by willing it to happen.

The biggest issue, though, is that Po’s overall character doesn’t translate to this film as well as it should. One of the reasons the first film works so well is that Po is good-natured and kind of bumbling. He succeeds almost by luck and instinct initially, and even when he is shown to be better than competent in his final battle, he still comes across as shambling and a little goofy. Here, he still has that same persona in terms of the way that he thinks, but he’s now a Kung Fu master except for the moments when it’s convenient to make him a novice. It simply doesn’t feel right.

I don’t want this to come across as my being completely down on this film because I’m not. I enjoyed it. I just didn’t enjoy it nearly as much as I wanted to or nearly as much as I did the original film. It’s a major step backward, but it’s still worth watching.

Why to watch Kung Fu Panda 2: Builds on the world and story from the first film in a way that makes sense.
Why not to watch: Most characters are still criminally underused and it lacks a lot of the fun of the first film.

Posted by SJHoneywell at 4:40 PM