This is the sixth in a series of twelve films suggested by the guys at YourFace. This is Nick’s second pick. 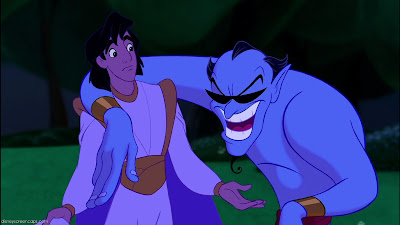 Everyone has a couple of movies they’ve somehow missed. I’m sure there’s a blogger out there who hasn’t seen Jurassic Park or Fight Club. For me, one of those movies is Aladdin, which is a generation-defining movie. The truth is, though, that it defines the generation before mine. When this was released, I was in my mid-20s and didn’t have any kids. So you can give me grief about not having seen Aladdin until now, but was there really a reason for me to have seen it when it was new?

Since I’m probably the last person in the free world to see Aladdin I’ll be quick with the summary. Jafar (Jonathan Freeman), Grand Vizier to the Sultan of Agrabah (Douglas Seale) has been searching desperately for the fabled magical lamp that contains a magical genie capable of granting three wishes to whomever owns the lamp. Through some magic, he locates the “diamond in the rough,” the only person capable of collecting the lamp. This turns out to be the titular Aladdin (Scott Weinger), a street rat who lives by stealing food for himself and his pet monkey Abu (Frank Welker).

The secondary plot here is that the sultan’s daughter Jasmine (Linda Larkin) is required to marry and needs to marry a prince because of her position. Jasmine wants more autonomy than the complete lack of same she’s been granted, so she sneaks out of the palace, gets into trouble, and is rescued by Aladdin. Through a few machinations, Aladdin is sent off to collect the lamp by Jafar, is double-crossed, and ends up with the lamp as well as a cool magic carpet. And with the lamp comes the genie (Robin Williams).

The plot turns on a few points. First, Aladdin wants to win the heart of Jasmine, but the genie is unable to create love, but he is able to make Aladdin a prince. Jafar’s parrot sidekick Iago (Gilbert Gottfried) suggests to Jafar that he marry Jasmine, and of course Jafar wants the lamp and access to the genie. There’s also a lot of singing, things getting as bad as they possibly can, and a happy ending for everyone but the bad guys.

So let’s talk good points. That includes, as it typically does for Disney animated films, the score and the songs, both of which won Oscars. In fact, my only complaint here is that the Oscar winning song “A Whole New World” is at best the third-best song in the movie. Given my choice, I’d have nominated (and voted for) “Prince Ali” as the best song in the film and “A Friend Like Me” as the runner-up.

Also typical for Disney animated films, my favorite characters are the non-human ones. The genie is absolutely the stand-out character; in fact he deserves his own paragraph. The other three non-human characters are great, though. Abu the monkey is one of Disney’s most entertaining animal sidekicks and the magic carpet manages to be cute and expressive without saying a word. I also like Iago, who is entertainingly wicked as Jafar’s assistant.

It’s the genie who is the true star of the film, though. Robin Williams, who always had a malleable voice and was subject to brilliant episodes of ADHD, is possibly the closest thing we’ve ever had to a real life animated character. My guess is that the filmmakers handed Williams something like a script and just recorded what he said and that probably two-thirds of everything that comes out of the genie’s mouth came actually from Williams’s own head on the spot, with the genie then being animated around his stream of consciousness comedy. However they did it, it was the right way to do it. The genie is fun and funny, makes references that parents will get but will not detract from the film for kids, and is consistently funny.

(Incidentally, I was right in this. Williams ad-libbed so much of his own dialogue that the screenplay was rejected as a nomination for Best Adapted Screenplay. Ah, the magic of Google…)

Are there downsides? Sure, but they’re the kind that are going to generally be missed by the target audience and will probably continue to be missed by the people who grew up on Aladdin and love it because they did. There’s not a great deal of character development for anyone, or really even a good sense of character. Beyond being poor and good-hearted, we don’t really know much about Aladdin. Beyond being pretty and bored, we don’t know much about Jasmine. However, in a film like this one, I’m not convinced that these are fatal flaws. They’re evident, but this movie isn’t really about character development. It’s about the adventure and it’s about Robin Williams’s mania fully realized in animation.

Similarly, we get a few common Disney tropes here. Aladdin is an orphan and Jasmine is missing her mother. Why? Because Disney. In fact, the sultan looks a lot like a typical Diseny father; he’s short and dumpy and completely ineffectual. I’m not sure why Disney hates two parent households, but in the string of their animated films where the hero and/or princess grows up missing at least one parent, Aladdin fits in nicely.

All of that said, Aladdin is a film where the positives hugely outweigh the negatives. I can’t imagine a kid not liking this, or wanting to spend a great deal of time around an adult who couldn’t appreciate at least some of it. This is a straight win, Nick. Y’all are 5.5 for 6.

Why to watch Aladdin: It’s considered part of the Disney renaissance for a reason.
Why not to watch: Even for 2D animation, the characters are disturbingly two-dimensional.

Posted by SJHoneywell at 2:57 PM