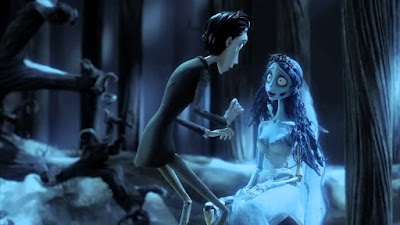 I first saw Corpse Bride in what could not have been better circumstances. The local theater ran it as a double feature with The Nightmare Before Christmas, which made for a great double bill. In retrospect, I think less of Corpse Bride now than I did 10 years ago. There’s quite a bit to like in this film, but it has a massive flaw that prevents me from liking it as much as I want to.

Corpse Bride in a way feels like the culmination of many of Burton’s themes. There are elements of Beetlejuice, Edward Scissorhands, and Sleepy Hollow in this film, and I like two of those movies pretty well. It also has the look and animation style of The Nightmare Before Christmas, which Burton produced (and is frequently credited with directing, although he didn’t). We start with a marriage of convenience. Young Victor Van Dort (Johnny Depp) has had his marriage to Victoria Everglot (Emily Watson) arranged by his parents. This is an important move for both families. The Van Dorts are nouveau riche fishmongers looking to move up on the social ladder. The Everglots are aristocracy rich in land and tradition but poor in cash. The wedding, then, will give both families something that they either desperately want or desperately need.

The problem is that Victor is shy, awkward, and easily intimidated. The two meet cute while their parents discuss the details of the marriage. But at the rehearsal, Victor is completely overwhelmed by the minister (Christopher Lee) and can’t repeat his vows. After Victor manages to light his soon-to-be mother-in-law’s dress on fire, the rehearsal is called off. Worse for Victor, this is paired with the arrival of Lord Barkis Bittern (Richard E. Grant), a suave aristocrat with a few dark secrets that come out over the course of the film. It’s evident that Barkis is there as a replacement and evident upgrade for Victor, one that the Everglots are quick to wish to capitalize on.

For poor Victor, things just get worse. He goes off to the forest to practice his vows, repeats them perfectly, and places the ring on a vaguely hand-shaped tree branch. Sadly for him, this is also the final resting place of Emily (Helen Bonham Carter), a jilted bride killed by her groom years before. She has been waiting for someone to do exactly what Victor has just done, and accepts his proposal, meaning that Victor has just married a corpse. Hilarity, danger, a zombie uprising, and attempted murder ensue. By the end, the good guys win, the bad guys get their just desserts, and the credits roll a scant 73 or so minutes after it started.

So let’s talk about what the film gets right. The animation is excellent, as is the look of the film. One of the more interesting choices is that the living world of the film is almost monochromatic in various shades of blue until the end of the film. The afterlife, populated with skeletons, is bright by comparison, although the colors are still muted. The majority of the characters are abnormally thin and angular, almost spindly. It’s just creepy enough to be a little scary for kids but not so scary that they’d be too upset by it.

It’s also beautifully cast. In addition to the voice work of the people mentioned above, the smaller roles are handled very well. Standouts include Albert Finney as Victoria’s father and Joanna Lumley as her mother. Tracey Ullman voices both Victor’s mother and Victoria’s maid. Also worthy of note are Deep Roy as a parody of Napoleon Bonaparte, Enn Reitel as the maggot who lives in Emily’s head and the town crier, and the great Michael Gough as the old wise skeleton who helps Victor and Emily.

One of the bigger disappointments is the songs. Corpse Bride is basically a musical, but most of the songs are merely serviceable and completely unmemorable. The opening “According to Plan” song is good, as is the one that explains the backstory of Emily, but the rest I couldn’t repeat a single line of or hum the tune from. That’s kind of sad for a movie that trades as much as this one does (or should) on the music.

A much bigger problem is the length. Corpse Bride clocks in a 77 minutes including the credits. It’s not substantial enough to feel worth it. There’s a lot more that could be explored here in terms of the film’s concept of the afterlife (for instance) that is untouched. This could be a much richer film world, but we’re left with just a couple of glimpses into these two vastly different worlds and then everything is done.

Corpse Bride has fun sensibilities and a great deal of potential, but it lives up to only a part of what it could have been. It ends up as middle-tier Burton for me, better in concept than in execution.

Why to watch Corpse Bride: Kids’ movies are more fun when they’re at least a little dark.
Why not to watch: Far too short.