Only the Young Die Good 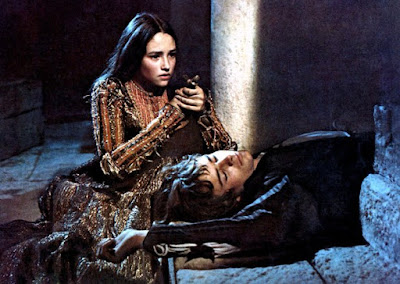 Every now and then I find it necessary to hammer home a point. This is one of those times. I really don’t like the story of Romeo and Juliet. There are two versions of the story on my Oscar list, which means that despite my wishing it weren’t so, I’ll have to sit through it twice. Not wanting to be put in the situation of watching them back-to-back, I figured it made sense to knock one out now. Romeo and Juliet from 1968 is widely considered the best example of the story put to film. It’s also the one that was available.

If you don’t know the story, you’re either very young or very sheltered. It is the classic tragic love story, the yardstick by which all such love stories are measured. It’s curious in that sense that I don’t like it very much. I like tragic romances more than I like happy ones. What it comes down to is that I don’t really like the characters and I don’t really like the way that the plot turns. I’m not going to do a long summary of the story here (really, you should know the story and know at least some of the characters). The essential plot is that two horny teenagers from feuding families fall desperately in lust with each other (and call it love) and get married in secret. Then everybody acts like an asshole and everybody dies.

Okay, maybe that’s a little unfair. I went into this with very guarded hopes, though, since I’d been told since my undergraduate days that Franco Zeffirelli’s version of Romeo and Juliet is the gold standard. There are a lot of things it gets right. First is the casting. One of the issues with the story is that we’re dealing with children. Romeo is supposed to be about 17 and Juliet is a week or so away from her 14th birthday in the play. The problem is finding actors young enough to be believable in this respect but still capable of pulling off the difficulty of Shakespeare’s dialogue and intensity of emotion.

Rather than going with experience actors, Zeffirelli went with, well, kids. Leonard Whiting was 17 or 18 when he took on the mantle of Romeo. Similarly, Olivia Hussey was 15 playing Juliet. It’s evident that Zeffirelli didn’t specifically cast them for their acting talents. They’re not terrible, but they’re also a little stiff at times. What they are, both of them, is physically gorgeous. It’s easier to buy the love at first sight angle when the two actors in question are staggeringly attractive. Yes, I realize that I’m saying that about a 15-year-old playing a 13-year-old. Yes, I agree that that’s disturbing.

The casting is equally good in other prominent roles. Aside from the two principal characters, the most important roles in the play in my opinion are Mercutio, Tybalt, Friar Laurence, and the nurse. All four here (John McEnery, Michael York, Milo O’Shea, and Pat Heywood respectively) are just about perfect.

It’s also worth saying that while I don’t like the story in general, it has some great moments. The death of Mercutio is one of Shakespeare’s great scenes. This is mainly because it demonstrates the tone of what is to come in the final acts. For someone unfamiliar with the story, we have simply a romance that has blossomed between unlikely suitors at the start of the play. When Mercutio (Romeo’s friend) is stabbed by Tybalt (Juliet’s cousin), the tone shifts immediately. It works even more because Mercutio up to this point has been a comic character. Shakespeare is telling the audience that he’s about to get serious because he’s killed off his clown, the one guy who has been consistently funny up to that point. He even makes jokes while he’s dying.

Another benefit here is the staging. This really is beautifully filmed, evidenced by the Oscars won for costume design and cinematography. With any play adapted to film, the question I tend to have is how the director has made use of film as a medium. Sure, there’s no question that this is based on a play, but Zeffirelli doesn’t have it look like a play. It looks like it’s taking place in a town. There are wide angle shots that show us Verona. Action in scenes (like the battle scenes between Mercutio and Tybalt and then Tybalt and Romeo) occur in a wide expanse, something that could never work on a stage. In short, Zeffirelli has done all he can to pluck the story from the stage and place it in a real world.

And that’s really what it all comes down to. Zeffirelli’s Romeo and Juliet is a really good version of a story I really don’t like. It is, for me, like a pecan pie baked by the world’s best pastry chef. If you’re a fan of that, you won’t find it better, but nothing is going to get me past the fact that I really dislike pecans. I’m still not going to like the world’s best pecan pie. And I’m never going to really like the best version of a story I think sucks.

Why to watch Romeo and Juliet (1968): It’s the best version of the story available.
Why not to watch: It’s Shakespeare’s dippiest story.