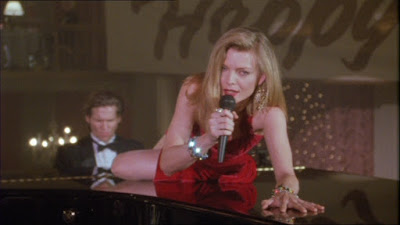 I can’t say that I’ve ever been a fan of Michelle Pfeiffer. I can’t quite put my finger on it. There’s something about her that comes across as false somehow. I don’t know where this comes from and if I’m completely honest, I think it’s probably completely unfair on my part. She is the reason The Fabulous Baker Boys showed up on my list of films to watch, though, and it’s only fair that I not prejudge her or prejudge the movie based on her presence. However, the only other adult female role in the film that lasts more than a couple of seconds is played by a young Jennifer Tilly. I love Jennifer Tilly, so in that respect, I’d have preferred to have spent more time with her.

That said, I’m happy I do my best to go into movies with as much of a blank slate as possible, because not only is this a good film, it’s Michelle Pfeiffer’s best performance with the possible exception of Dangerous Liaisons. It’s not that often that I get to see a film that really redeems an actor about whom I am lukewarm, but The Fabulous Baker Boys is that rare thing.

Frank (Beau Bridges) and Jack Baker (Jeff Bridges) are a duo piano act playing a variety of hotels, clubs, and lounges. It’s quickly evident that Frank, married, is the more business-minded and more serious about the act. Jack, a bachelor, is content to go from bed to bed as the mood takes him. Despite their act working for a good 15 years, things are starting to wear down. There’s less and less call for a couple of piano players, so the brothers decide to change the act by hiring a singer.

After a day of disastrous auditions (headed by Jennifer Tilly), they are introduced to Susie Diamond (Michelle Pfeiffer). Susie has shown up late for the audition and is rude and disrespectful, but she’s also the only person they’ve seen all day who can actually carry a tune. She’s hired for 20% of the take, and while their first gig gets off to a poor start, Susie quickly proves that she’s got the chops to handle the job of chanteuse. And it works; the jobs start pouring in, in no small part because of Susie’s talents.

A wrench is thrown into the works when it becomes evident that there is some attraction between Jack and Susie, an attraction they act on when Frank is called away from a gig because of a family problem. This naturally causes friction, and leads eventually to not only Susie leaving the act but serious damage between the two brothers. The third act of the film is the playing out of what has happened between Jack and Susie.

Let’s start with the music. The Bridges brothers don’t actually play the piano in the film, but they look like they are. The music is great, especially since a great deal of it is fully intended as a very good version of what is essentially cheap lounge music. Michelle Pfeiffer does her own singing throughout, though, and that’s what sells the music completely. I might have my reservations about her, but she nails the vocals perfectly. The Fabulous Baker Boys is one of those movies that has “a scene” that is incredibly memorable. It’s the night where Jack and Susie are left to perform on their own and Susie delivers a steamy version of “Making Whoopee” while posing on Jack’s piano. It’s a show-stopper, and it’s almost certainly what earned her the nomination.

I also like how well-written these characters are. There’s a good deal of each person’s personality throughout the film. It doesn’t take us too long to figure out that Frank Baker is perhaps a little too willing to sell the act cheap just to keep working. He’s a grind who is convinced that everything works specifically because he has planned everything out as carefully and completely as possible. At the same time, we figure out that Jack is disenchanted with the act, tired of cranking out the same renditions of tired old songs, and acts like a disaffected playboy to hide the fact that every night he goes on stage to both do what he loves and to take another step further away from what he really wants. Susie is equally human, wanting something more than what she’s had but unwilling to compromise for less than she thinks she deserves.

A great deal of this film is not simply the relationship between Jack and Susie but also between Jack and Frank. In fact, it’s their relationship, both familial and professional, that drives the entire film. It’s another testament to how well-written this is that all three characters are vaguely unlikable and that we are still quick to like all three in some measure.

There’s a sense of realism here that is truly impressive. Hollywood romances often fail because they are idealized stories about idealized people. Nothing here is idealized except (perhaps) for the music, and even that gets taken to some tawdry and cheap places. It’s as if each character is given a view of his or her dream only to realize it’s just tin foil and chewing gum. The Fabulous Baker Boys not only presents us with that cheap reality, it shows us what happens when these characters realize the lack of value in what they’ve wanted all along and what they might get by wanting something better.

This is a smart film, and a well-written one. I’m kind of surprised that there weren’t more nominations involved.

Why to watch The Fabulous Baker Boys: It’s a romance movie that’s light on the romance and heavy on the realism.
Why not to watch: While the characters are likable, you won’t be sure why that’s true.