Film: The Tin Star
Format: DVD from NetFlix on laptop. 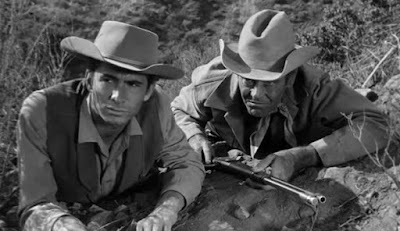 When I did the 1001 Movies list, I knew there would be some duds. I figured the same would be true watching films off a list of Oscar categories. I was right; there are definitely some hills and valleys. It’s easy to get discouraged by films that I hope are good and turn out to be cruddy. Every now and then a film like The Tin Star shows up and it makes the whole thing worthwhile. I’m not a die-hard fan of Westerns and don’t choose them often given a free choice, so I’d likely have never watched The Tin Star on my own. That would have been a shame. While there are some real issues with the screenplay (despite that being its nomination), there’s a lot more here that more than makes up for any problems.

Morgan Hickman (Henry Fonda), former lawman and current bounty hunter, rides into a stereotypical Western town with a body strapped to a second horse. This earns him nothing but scorn from the local residents, who like to have their criminals brought in alive. Morgan discovers that the sheriff of the town is Ben Owens (Anthony Perkins), who looks barely old enough to shave, let alone shoot. We’re also soon introduced to Bart Bogardus (Neville Brand). Bogardus runs a stable and is the cousin of the man Morgan dropped.

There are a couple of stories that run through this film. The first deals with Ben Owens learning to be a sheriff because he feels honor-bound to do so. The town elders like him doing it, because the only other real candidate in town is Bogardus, a mean and cruel man who would use the badge as a hunting license. Morgan Hickman feels duty-bound to help Ben and to help Nona Mayfield (Betsy Palmer) and her son Kip (Michel Ray). Nona is a widow who was married to a native, making her son only half white (and wholly unacceptable in town). The plot line that ties everything together is the sudden appearance of a couple of outlaws robbing stagecoaches in the area. It’s this situation that helps Morgan teach Ben how to be a sheriff, deal with thugs like Bogardus, and also do what he can for Nona and Kip.

In a lot of ways, The Tin Star is a pretty standard Western. Standing out by Nona’s house, Morgan asks Ben what happened to the previous sheriff. Ben tells him that there are stories of a stagecoach robbing duo the sheriff was tracking. He was found dead at the very spot on which they are standing. At the same time, the McGaffey brothers, Ed and Zeke (Lee Van Cleef and Peter Baldwin) ride into town. If you can’t immediately figure out that the McGaffeys are the robbers, you’re simply not paying attention. I’d call this a spoiler except that there’s no possible way that 90% of the audience doesn’t twig to that immediately.

We get this confirmed when the local doctor Joseph McCord (John McIntire) is waylaid to help one of the McGaffey brothers with an injury that matches what happened to one of the stagecoach robbers. What happens following this is precisely what we think will happen, and while this comes off as a cliché as well, it works even as we realize how it’s going to happen before it does.

I can easily forgive such ham-handed plotting because the rest of the film is a doozy. When The Tin Star gets away from the standard Western tropes, it turns into an interesting and layered film. It’s smart enough not to consider anyone here as dumb. Ben might not know much about being a sheriff, but he’s smart and willing to learn. Morgan doesn’t want to be involved because it brings up too much of his own past, but he can’t get away from it, either and helps almost despite himself. Even Bart Bogardus, who is as close to a Western villain as he can be keeps all of his actions inside the law. The final and inevitable confrontation between Ben and Bogardus doesn’t happen because one is good and one is bad. It happens because they fundamentally view reality differently.

The whole film builds up to that last showdown between sheriff and wannabe sheriff. The scene goes for a few minutes and there’s not a single wasted frame in it. The tension is thick, and while there are moments in it that still slide back to that Western cliché, the scene is one of the best showdown moments I’ve come across. It’s not High Noon, but it’s playing in the same league and on the same field.

In other words, The Tin Star does just about everything right. Sure, there are places where I’d love to see it move away from convention, but that might be asking too much of a film in 1957 just after the rebirth of the genre. It needs to stick to some of those conventions to give the audience of the time what it wants. No, what makes the film notable is not where it follows the genre guidelines, but where it moves outside of those guidelines and tries to do something new. If for no other reason, it’s notable because Kip isn’t the typical annoying Western kid. He’s actually a good character.

The Tin Star hits in the sweet spot of the Western resurgence, and it’s really well done. It’s got a fantastic cast, and for those who thing Betsy Palmer was only capable of playing Jason Voorhees’s mother, it’s proof that she could do a lot more. Finding worthy and forgotten films like The Tin Star is why I do this.

Why to watch The Tin Star: A great cast and a great ending.
Why not to watch: There are several moments that are more obvious than they should be.

Posted by SJHoneywell at 9:54 PM