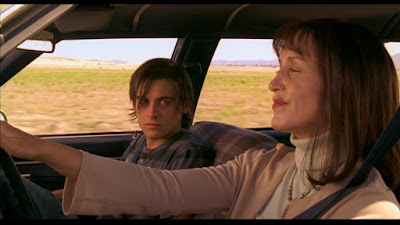 A number of years ago, I was a fan of the show Sports Night, which was my introduction to Felicity Huffman. It was a well-written show and completely entertaining, but like a lot of television shows, it’s not one that screams that the actors involved are necessarily ones who will be discussed in contention with Oscars. Don’t get me wrong—I like most of the cast of that show. But Sports Night isn’t the kind of show that prepares someone for Felicity Huffman’s performance in Transamerica. Additionally, knowing that Felicity Huffman is more well-known for the trashy Desperate Housewives only makes the juxtaposition of her television roles with Transamerica that much more surprising.

The title here is something of a pun. The film involves a trip from Los Angeles to New York and back again. It is also about a transgendered woman just at the point of surgery. Sabrina “Bree” Osbourne (Huffman) was born Stanley Schupak and has gone through a number of surgeries, procedures, and hormone procedures in preparation for surgery. A week before that surgery, Bree gets a call for Stanley…from his son. A son she didn’t know she had who is in jail and needs bail money.

Bree admits this to her therapist Margaret (Elizabeth Pena), who refuses to sign off on Bree’s final surgery unless she goes to New York and deals with this sudden development. So off Bree goes to rescue Toby (Kevin Zegers) from jail and then figure out what to do with him before returning home to complete the process of transgender surgery. Bree decides to pose as a missionary rather than admit to her current physical gender and relationship to Toby. For his part, Toby is a casual about drugs and sex and makes a living as a male prostitute. His one real ambition is to get to Los Angeles to start working in gay porn.

The rest of the film is the trip from New York to Los Angeles, through a number of obstacles both comic and serious. Bree tries to drop off Toby with Toby’s step-father only to learn that Toby had been sexually abused by the man for years. The pair spends a night in a sort of transgendered halfway house, has their car stolen, meets up with a kindly Native American named Calvin Many Goats (Graham Greene), and eventually arrives at Bree’s parent’s home. Her parents (Fionnula Flanagan and Burt Young) have a strained relationship with Bree, something especially true of Bree’s straitlaced and fundamentalist mother.

Transamerica is a smart movie for a number of reasons. In a lot of ways, it reminded me of Lars and the Real Girl with the caveat that this one came first in the real world and second only in the order in which I watched them. It’s a film that could have very easily gone into farcical territory with a nudge here and a tweak there. All of the characters, but particularly Bree, Toby, and Bree’s mother Elizabeth could have become parodies of real people. The film is smart enough not to let that happen. Bree in particular is a layered character with any number of motivations and emotional realities.

While the writing and care that Transamerica takes with its characters is a significant selling point of the film, the real reason to see it is the singular performance of Felicity Huffman. The easier road here would have been to have a male actor play the part in the same mode as Jaye Davidson in The Crying Game. Casting Huffman in the role makes this work at a deeper level. This is a biological man who wants to be a woman, and having that role played by a woman works on a real level. Huffman is brilliant in the role. She comes across not as someone masquerading in the part but genuinely as a male in the process of transitioning to female. The makeup work is similarly effective; she looks like a transgendered man, a sort of feminine wash over a masculine frame.

There are plenty of times that Transamerica feels uncomfortable, and I think that’s intentional. The film is a nice blend of serious, tragic, and comedic moments that all work to make this less of a film plot and far more believable and realistic.

Did I like Transamerica? I think I did. There are parts where this film is really uncomfortable, but it’s uncomfortable in a way that is very different from what might at first be supposed. There is no discomfort at all in accepting Bree’s personal definition of herself. The discomfort here is experienced more on behalf of and in sympathy with Bree rather than because of Bree or her identity. I’m about as far as I can be from being transgendered, but the depiction here is sensitive, caring, and real enough that I had no issues at all sympathizing with her. I think it’s a sign of good writing and a towering performance that I was so easily able to identify with someone who is in significant (but superficial) ways so different from me.

Why to watch Transamerica: Felicity Huffman.
Why not to watch: You may have issues if you’re transphobic.