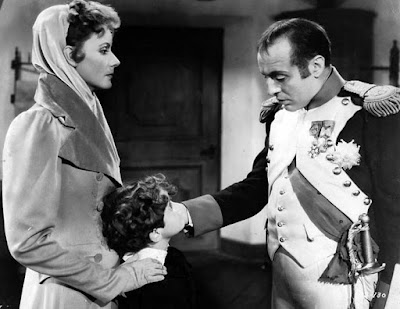 There are times when I could wish that my interests in film were not as focused as much as they are on plot and narrative. Were that the case, I’d have more to say about a film like Conquest, which can so easily be summarized in a single paragraph. That’s not too rare with a lot of earlier films on my Oscar lists. It wasn’t until we started getting massive epics and the twisty plots of film noir that things got more complex on the plot front in general (yes, I’m aware of exceptions).

Put simply, Conquest is a love story between Napoleon Bonaparte (Charles Boyer) and Polish countess Marie Walewska (Greta Garbo). When the film beings, Napoleon is conquering Europe and is moving through Poland. It is here that he meets Marie, who is married to Count Anastas Walewski (Henry Stephenson). After a second meeting, Napoleon falls madly in love with her and basically forces her to give up her marriage for him. She does, and at the moment of his triumph, he marries a daughter of the Hapsburg family for the political connections, not knowing that Marie is pregnant with his son already. In more socially liberal terms, Conquest is the story of a woman who gives up her entire life and everything she wants for the man she is essentially forced to love and continues to do so regardless of how she is treated.

There are details, of course. For instance, Marie’s brother Paul (Leif Erickson) is initially a huge fan of Napoleon until he discovers that the Emperor has broken up his sister’s marriage and he essentially disowns her. That paragraph above also ignores the presence of Dame May Whitty as Napoleon’s mother and Maria Ouspenskaya as the dotty but sort of awesome mother of Anastas Walewski. It also leaves out Napoleon’s frenemy Tallyrand (Alan Marshal) and Marie’s servant Stephan (Claude Gillingwater), who is sort of the era’s staple “grumpy servant” character. But really, all of these people are more or less filler for the main story.

So, we have two real performances on which to focus here. The first is Charles Boyer, and really that’s only because he’s the nominated actor here and the sole reason I recorded this film onto the DVR more than a year ago. Boyer makes a good Napoleon. It’s nice that he’s not desperately short (which wasn’t true of the real man), and he kind of looks like we expect Napoleon to look. The heavily French-tinged English doesn’t get old; something that is mildly surprising. It’s not a bad performance, but it’s also nothing exceptional. Still, it’s a bit part in a big film, and that’s the sort of thing that wrangles a nomination.

The other main performance here is Greta Garbo. I have an odd relationship with Garbo and her films. I tend to like her a lot more than I like most of her movies. Conquest came out the year after Camille, and there are a great number of similarities between her character here and her character in that film. Her main character trait, aside from going from complete indignation to full-blown romantic attachment is to pine attractively. I like her better when she’s got some backbone to her. I’d rather watch her do a role like Ninotchka than the one she performs here.

For all that it seems like I am complaining about this, I didn’t really hate Conquest. I can’t say I liked it a lot, but I didn’t hate it. It was more or less on while I sat there and looked at it, and once it was over, I deleted it from the DVR without thinking too much about it. It’s not a film I’d consider watching again, but if someone insisted, there are plenty of movies that I would complain about more. I mean, at the very least, the costumes are pretty impressive.

So, anyway, I got 2% of my DVR’s memory back. It’s also worth noting that when I do a film like this one that has fewer than 50 views on Letterboxd that I sigh inwardly, knowing that I’ll get half of my usual hits and probably no comments. The things I do for completeness.

Why to watch Conquest: Good costumes.
Why not to watch: It’s bland.

Posted by SJHoneywell at 7:25 PM