This is the sixth in a series of twelve films suggested by Chip Lary at Tips from Chip. 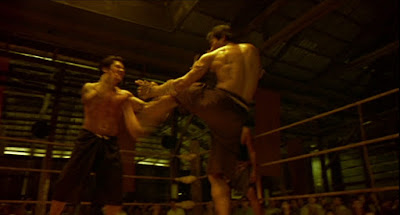 With Ong-Bak (also called Ong-Bak: The Thai Warrior and Ong-Bak: Muay Thai Warrior), Chip has given me something of a poser. For my Letterboxd page, Ong-Bak is right on the border beween 2 ½ and 3 stars. That might not sound like a dilemma, but for me, 3 stars is the cut-off for “liking” a film on that site. Ong-Bak has one major plus and a lot of negatives. That one plus cures a lot of ills, but not all of them.

After we watch a fairly brutal contest to achieve a red pennant from the top of a tree in a small Thai village, the film really starts. Some guys, led by Don (Wannakit Sirioput), attempt to buy a necklace from a village elder. He refuses, so the gang instead steals the head of Ong-Bak, the village Buddha statue. The winner of the tree/pennant contest, Ting (Tony Jaa) volunteers to retrieve Ong-Bak’s head. He’s given money, Don’s address, and instructions to look for his cousin, and off Ting goes.

Ting’s cousin Humlae (Petchtai Wongkamiao) has both forgotten his village roots and has become a criminal. He and his friend Muay Lek (Pumwaree Yodkamol) run a number of scams that tend to fail, which is why Humlae (who calls himself George) is always in debt and has a constant stream of people looking to beat the crap out of him. Humlae runs away with Ting’s money and bets it at a fighting club. Wanting his money back, Ting arrives and knocks out the club’s current champion with a single kick, getting his money back. This brings Ting to the attention of Komtuan (Suchao Pongwilai), a gangster type who spends his life in on a motorized wheelchair and talks with an electrolarynx.

What follows are a few fight scenes and a few chases, culminating in several narrow escapes from death and, eventually a final battle in a cave where Komtuan is having his minions remove the head of a giant Buddha statue. This gives us the opportunity for a big final battle with Ting beating the crap out of bad guys and even Humlae getting in a few licks.

With a martial arts film, the first and foremost concern—one might say the only real concern—is the quality of the action. When Ong-Bak gives us fight scenes, they’re generally pretty fantastic. Tony Jaa is an extremely agile and talented ass-kicker. Ong-Bak is all the more impressive for its lack of wire work, green screening, CGI, and other visual tricks. When Jaa jumps off a platform and does a double flip that includes kicking a guy in the face, he’s really doing it. In this respect, Ong-Bak deserves to be considered with the best films in the genre.

It’s everywhere else that the film falls apart for me. I’m not really talking here about the paper-thin plot. Plenty of chop-socky movies like Shaolin Master Killer and even Enter the Dragon are thin on plot because it’s not really about that. It’s also not really about the poor acting quality, and the acting quality really is poor. No one watches a Jackie Chan movie for the quality acting, though, so that’s also not much of a consideration here.

The best way I can put this is that Ong-Bak, while made in 2003, looks and feels like an action movie from the middle of the 1980s. Specific moments in the film are shown in duplicate or triplicate at times. Ting does some amazing thing, like literally running across the heads and shoulders of a crowd of thugs looking to hurt him, and then we see it again from another angle, and then a third angle, this time in slow motion. There are a few points where we see action movie explosions that don’t seem to have much of a cause other than the fact that they are in action movies. I don’t even begrudge the moments where guys are obviously bracing for a hit or flinching from what they know is coming.

The first major chase sequence happens on foot, and consists of both Ting and Humlae being pursued by a group of evil henchman. What we get is an obstacle course. Ting gets through the obstacle (a strategically placed loop of barbed wire, a line of gardening tools), Humlae gets through comically, and then the bad guys are blocked by it. This I think is intended to feel like an homage to Jackie Chan, but it comes across more like an homage to Gymkata. It feels unnatural, like it’s being carefully arranged because, well, it is. Chan’s work with props always comes across as more natural. Here, everything is so obviously manufactured that it simply doesn’t work. It’s no less impressive that Tony Jaa can leap through a small loop of barbed wire without snagging anything, but it looks like a stunt, not a natural part of the chase, especially when the guys carrying the barbed wire move into position and stop for no reason other than that Tony Jaa needs to jump through it. And despite his creative methods of getting through obstacles and the problems the bad guys have with those obstacles, they never really lose any ground on Ting and Humlae.

This sort of thing happens all the time. In one fight, he happens to find some pieces of metal that just happen to work perfectly as a set of tonfa. Tonfa are cool weapons (think old-school police batons), but how common is it to find a piece of metal roughly the length of one’s forearm with a convenient handle? Let alone a matched pair of same? It was here specifically that I thought of Gymkata and the pommel horse in the middle of the town. That the tonfa sequence is followed by Ting dropping a useful weapon and going into the next conflict unarmed is hardly surprising, but makes no more sense here than it does anywhere else.

It damages the film in no small part because I’ve already seen The Raid: Redemption. That film is similarly light on plot and long on action, but it’s significantly better in many ways. First, I like the characters more. Second, while the action in The Raid is no less spectacular, it comes across as being more natural. Third, the acting is considerably better.

Ong-Bak is right on the edge. Tony Jaa cures a lot of ills and the lack of wire work is a huge bonus, but it’s not enough to get me all the way there. I’ll call this half credit because it’s not a complete miss, and Jaa’s skills make me wonder why he wasn’t tapped for The Expendables (although he has possibly signed on for The Raid 3). That puts Chip at 5.5 for 6.

Why to watch Ong-Bak: Tony Jaa kicks serious ass.
Why not to watch: This movie looks 20 years older than it is.