You Think Your Family Has Problems... 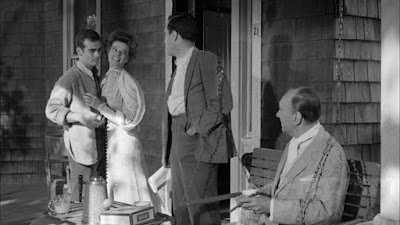 When I can, I like to knock longer movies off the list of films I still have to watch. I recorded Long Day’s Journey into Night a couple of weeks ago, and it’s just shy of being one of the 10 longest I had left. Today I had the chance to knock it out and figured it was a good opportunity to knock out something that hits close to three hours. In the interest of full disclosure, this is a film that I’ve tried to get through before and didn’t get much past the first half hour. Long Day’s Journey into Night is not something that one enters into lightly.

This film is the cinematic version of Eugene O’Neill’s play of the same name. This is soon evident. With the exception of a couple of early scenes that take place outside or in something like a shed, the entire story takes place within a couple of rooms of a large house. There are only five characters here: four family members and a cook (Jeanne Barr), who is only really in one significant scene. It’s the family we’re concerned with, and each one could easily be the main character of another story.

We’ll start with Mary Tyrone (Katharine Hepburn), the matriarch of the family. Mary, we soon learn, is recently returned from a stay at a sanitarium to deal with her morphine addiction, something with which she has had a continual problem. Mary is trapped in her past, reliving a lot of her past life when she was young and beautiful instead of old and faded. The main concern of her husband and sons is that she will slide back into her morphine habit, especially with the potential sickness of her younger son.

Mary’s husband is James Tyrone (Ralph Richardson), a former actor who is now a significant landowner. James grew up staggeringly poor, which has turned him into a miser, unwilling to spend money on anything. His sons blame him for their mother’s morphine addiction, since it happened (at least in their minds) because he wouldn’t pay for a legitimate doctor for her when she was sick. James is more comfortable in a bar than anywhere else, and while he denies it, he drinks far too much.

Older son Jamie (Jason Robards) has attempted to follow in his father’s footsteps by acting, but shows up back at the family’s summer home every year broke from spending all of his own money on prostitutes and booze. While there is a real darkness in all of the characters, it is Jamie who is by far the darkest. He is unrepentantly reprobate and it is heavily implied through a great deal of the film that his descent into debauchery is done to spite his father more than for any other reason.

Younger son Edmund (Dean Stockwell) has some of the same drinking problem as his father and older brother, although it doesn’t seem as far progressed. Edmund has developed a cough that the family fears might be tuberculosis (or consumption in the vernacular of the time, and also what killed Mary’s father). Edmund spent time away from his family working on ships around the world, likely the place where he developed his current sickness. Edmund seems to be the most sensitive of anyone in the family and the most psychologically wounded because he is also the sanest.

The story takes place over a single day and features various combinations of the characters (as well as a single scene between Mary and the cook Cathleen). Through the course of the day, we see Mary return to her morphine habit, Edmund finally get the diagnosis of tuberculosis, and all three of the men get stinking drunk. By the end of the film, we know everything we need to about these characters and have a good idea of where each one is headed. The reason the whole story works is not the characters themselves but the interplay between them. There is a sense that each person would like things to be better, but each of them is incapable of doing anything but making everything worse.

Katharine Hepburn was the only nomination from this film, and that’s a significant oversight in my opinion. Ralph Richardson is her match in every scene, and both Jason Robards and Dean Stockwell could have easily stood for Best Supporting Actor at the very least. All four of these performances rank with the best of any that these four actors ever gave, which is a hell of a statement to make. I stand by it. While the focus is certainly on Katharine Hepburn when she is on screen, Richardson, Robards, and Stockwell are no less magnetic.

What’s lacking here is anything that makes this different from a staged version of this play. While there are a couple of moments that are certainly cinematic rather than staged, more than 95% of this could just as easily have been done exactly as shown here on a stage. In that respect, Long Day’s Journey into Night is disappointing because it doesn’t really use the medium to its full effect or really any effect.

Beyond that, this is a tour de force of performances. Any of the four main players here could be studied for lessons in acting. This is not a happy film by any stretch, and with the one mildly likable character being stricken with a terrible disease it doesn’t offer a lot of hope for these people in the future. It’s depressing and it’s long, although it doesn’t really feel its length. This is another film that I can’t say I enjoyed watching, but I can say I’m suitably impressed by it.

Why to watch Long Day’s Journey into Night: Four performances that rank with the best.
Why not to watch: It’s long and completely depressing.