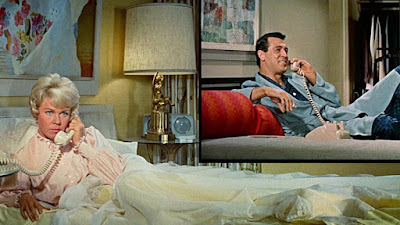 When I think of comedies with a more sexual edge, I don’t generally think of the late 1950s as the go-to era. That is what we get with Pillow Talk, though. This is one of those “of its era” movies because the plot turns on something that simply has no real modern adjunct. I expected this to be squeaky clean in terms of sexual content and innuendo and I was pleasantly mistaken on that front. Oh, there’s no nudity here, but there’s a great deal of implied sex and at one point, an unmarried young woman goes off to a wilderness hideaway with a man. That seems forward for a film in Eisenhower’s America.

That old school conceit here is a party line telephone in New York. In this case, the line is shared by Jan Morrow (Doris Day) and Brad Allen (Rock Hudson). Brad, as is often the case in this sort of movie, is a wildly successful creative type. He’s a songwriter currently working on a new score for a Broadway show. In addition to being a successful songwriter, Brad is also quite the ladies’ man and has a habit of tying up the line talking to the women in his substantial little black book. He frequently plays these women a song he’s written “just for them.” It’s actually the same song regardless of woman, with the appropriate name tacked in at the end of each line.

Jan is a successful interior decorator who often works out of her apartment. With Brad tying up the line, she’s unable to make business calls and since she doesn’t have a real emergency need for a private line, she’s stuck with Brad. This is not a problem for her alcoholic housekeeper Alma (Thelma Ritter), who enjoys listening in on Brad’s more amorous conversations. Frustrated, Jan offers a compromise: Brad gets the line for the first half of each hour and she gets it for the second half.

So now that we’ve set up the tension between the two people we want to be together at the end, we need to get them together. Enter Jonathan Forbes (Tony Randall). Jonathan is one of Jan’s best and wealthiest clients. He’s also madly in love with her and would do anything for her, but she’s simply not interested in him or his vast wealth. Because this is a movie, Jonathan also happens to be a good friend of Brad and is in fact financing Brad’s new musical. Jonathan’s description of her piques Brad’s interest, and when he sees her at a club, he decides to make his move. Of course, since Jan thinks that Brad is a sex-crazed lothario (which he kind of is), he puts on a fake Texas accent and calls himself Rex Stetson. He also keeps her physically at arm’s length to play up his nice guy and gentlemanly image.

You should be able to see where this is going in general, and that is where it goes. It gets there by some clever means, though. While the end is never in doubt in a romantic comedy like this one, that’s not the issue. We’re not really questioning if Jan and Brad will end up together but how that event is going to come about. There are a few twists and turns getting there, and it’s surprisingly clever in leading us to the ending that we want.

Pillow Talk gets a lot right, not the least of which is the casting of the four main roles and the chemistry between the characters. Doris Day and Rock Hudson are good together on screen. They look like the era’s definition of the perfect movie couple, which is probably why they made several other movies together. Brad Allen is kind of a shit, but Hudson is likable enough that we forgive him for it, especially when it becomes evident that he’s really trying to become a better man for the sake of Jan. Jan is a superior version of what has become the romantic comedy female lead staple. When the movie starts, she’s got a great job and isn’t really that interested in any one guy. She gives in eventually, but she gets there honestly and without the more modern conceit that her life is empty without a man at the center of it. Tony Randall plays a millionaire version of his character from the television version of The Odd Couple and does it as well here. Thelma Ritter? She’s always a joy to watch.

Pillow Talk is a template for a lot of movies that follow it, and a lot of movies have followed it because it was both successful and good. I’m not a fan of the plot that requires a woman to fall for a guy who has lied to her about everything, but Pillow Talk handles that as well as it could be handled.

There are a few last things worth noting here. Despite a lack of nudity and overt sex, there’s a lot of sex here. Brad has an apartment with a series of electrical switches in it, one of which pops a bed out of the middle of his couch. There’s also some very unpleasant sexual ideas running through this movie. Another of Brad’s living room switches locks his door automatically, with the implication being that he uses the switch to prevent women from leaving. At one point, Jan is being driven home by a client’s son only to have the lad pull the car over and spend a couple of minutes trying to grope her. This scene is played for laughs, but it’s really unpleasant in modern sensibilities. The kid (Nick Adams) comes off exactly as the sort of guy who wouldn’t blink about slipping roofies into a date’s drink. More to the point of being creepy, after he spends a few minutes trying to paw her, Jan agrees to go out for a drink with him, where he attempts to get her drunk enough to take advantage of her.

There’s also a supremely meta moment here that was certainly unintentional but is nonetheless interesting. In the middle of the film, Jan brags to Brad about her new boyfriend Rex (who is, of course, Brad). When she claims that Rex has been a perfect gentleman, Brad tells her it’s probably because he’s gay (although he’s not as blunt). Hudson, of course, was gay and hid that fact for most of his life. It’s a scene that plays differently now than it did in 1959.

Anyway, while there are problems here that come mostly from the age of the film and changing morals and standards, Pillow Talk is still a lot of fun.

Why to watch Pillow Talk: Great cast in a romantic comedy that’s actually funny.
Why not to watch: Some date rape-y moments are passed off as comedy.