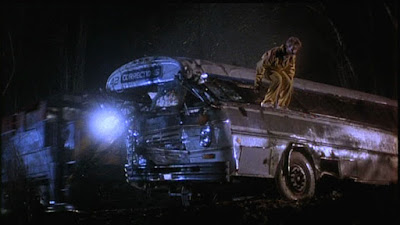 I’m not going to play here: I really like The Fugitive a lot. It’s an easy step to call it an action movie, and while there’s plenty of action here, I wouldn’t qualify it as one, or at least not as simply an action film. No, it’s one of the finest crime thrillers since the heyday of the noir era. It’s also one of the few properties that successfully transitioned from the television screen to the big screen. I still have trouble believing that this didn’t make the 1001 Movies list and cannot for the life of me understand why it wouldn’t. Along with horror and science fiction, movies heavy on the action are underrepresented on the big list. If any pulse-thumping film deserves to be given this sort of accolade, The Fugitive ranks just behind Die Hard for me.

Dr. Richard Kimble (Harrison Ford) attends a fundraiser with his wife Helen (Sela Ward). On their way home, he is called into emergency surgery. When he gets home, his wife has been murdered. A great deal of circumstantial evidence serves to convict him and put him on death row. When he’s being transferred to his new prison, a bungled escape attempt by other prisoners causes the bus to end up wrecked on railroad tracks with a train coming. Kimble saves the life of one of his guards and escapes a few seconds before impact.

Enter U.S. Marshal Deputy Sam Gerard (Tommy Lee Jones, who won the Supporting Actor Oscar for this role, and deservedly) and his team. Gerard is a no-nonsense man intent on pursuing and catching anyone in his jurisdiction, and Kimble is his new number one target. He is assisted by his putative second-in-command Cosmo (Joe Pantoliano), Biggs (Daniel Roebuck), Poole (L. Scott Caldwell), Henry (Johnny Lee Davenport) and the new guy, Newman (Tom Wood).

After his escape, Richard Kimble has two goals: to avoid being recaptured and to find the one-armed man of who actually did kill his wife. Kimble’s pursuit of this one-armed man (Andreas Katsulas) will take him all around Chicago, having him jumping off waterfalls, infiltrating hospitals, walking directly under the noses of the police. Meanwhile, Gerard and his crew start to realize that the only way to track down Kimble is to essentially solve the same case that Kimble is trying to solve. That will mean working the same clues and tracking down the same people, including Dr. Nichols (Jeroen Krabbe), one of Kimble’s old co-workers.

One of the things I love about this movie is that the focus is on very smart characters. Kimble is incredibly smart, always managing to be one step ahead of everyone. He’s also played as a true hero. In addition to saving the guard from the train crash, while investigating the names of people with prosthetic limbs at Cook County Hospital, he risks his entire point of being there to save the life of an injured kid. He’s a good guy; he’s someone we’re not only supposed to root for but who we want to see come out on top. Similarly, we like Sam Gerard and his entire crew. Again, these are smart people who are very good at their jobs. Gerard is much more intuitive than Kimble and gets very quick reads on people, but it’s something that other members of his team share. But even though they are more focused in that direction, Gerard and his team put together the real story of Helen Kimble quickly, and from a starting point much further back than Richard.

Second, I love how completely audacious this movie is. Richard Kimble has serious balls on him. This is a guy who, after escaping a train crash, makes his way to a hospital, sneaks in, stitches up a wound, changes his appearance, steals food from a patient, and walks out, stopping to do some triage on an incoming patient. He walks into a prison to check the identity of an inmate with a prosthetic limb. He walks into the lions’ den filled with cops looking for him just to check on a lead. Sure, he’s desperate, but the man does things like he’s a goddamn spy.

Third, and the most surprising part of this film, is the camaraderie between Sam Gerard and his team. I mentioned above that they are smart, intuitive, and good at their jobs. They’re also a group that obviously likes each other. They banter. They make jokes. We like them.

The Fugitive is a rare film that has us rooting for the hero and simultaneously rooting just as much for the people who are trying to catch the hero. We want them both to win, and The Fugitive is smart enough to give us exactly what we want in the end.

There are also a couple of fun cameos. Jane Lynch appears here in a couple of scenes as a doctor as does Julianne Moore right at the start of her career. I love seeing actors in films like this before their career starts. Tommy Lee Jones had a solid career before this movie, but this is the one that put him on the map.

A last note for just how baller this movie is: Harrison Ford injured his leg during his run through the forest early in the film. He refused medical treatment so that Kimble could walk with a limp for the rest of the film. Harrison Ford is just as hardcore as his character.

Why to watch The Fugitive: Because it’s fucking awesom.
Why not to watch: You’re a sad little person who lives a meaningless, stupid little life.