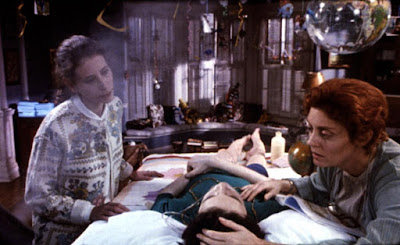 If you are a fan of the movie Lorenzo’s Oil, I’m going to ask you politely to back away now. Go to another website for a movie review and check back here on another day. If this is a film that you find inspiring and filled with heart and spirituality, I’m probably going to piss you off in the following paragraphs. If you’re an anti-vaxxer or a proponent of “alternative” health therapies and see Lorenzo’s Oil as justification for your beliefs, I’m going to much less politely ask you to leave, because that is precisely where I have issues with this film.

Let’s hit the meat of this. The Odone family begins the film living in the Comoro Islands. Father Augusto (Nick Nolte) works for the World Bank and mother Michaela (Susan Sarandon) takes care of young son Lorenzo (Zack O’Malley Greenburg). The family eventually returns to the United States when Lorenzo suddenly begins acting out. He begins throwing massive, unexplainable tantrums and showing signs of physical deterioration. Stumped by this, the family eventually receives the diagnosis of adrenoleukodystrophy (ALD), a degenerative genetic illness that strips the myelin from the brain and generally leads to death within two years of diagnosis.

Rather than panicking or turning to religion, the Odones go on a quest to educate themselves as much as they can about ALD, the nervous system, and anything else that might potentially benefit the treatment and therapy of their rapidly declining son. Much of what they do is counter-intuitive, and the film is very careful about keeping the explanations of the science here in very simple terms. Long-chain fatty acids, for instance, are reduced to a model of paper clips while Lorenzo’s inability to flush these fats from this system is likened to a clogged sink drain.

The Odones develop a variety of possible therapies and encounter resistance from a group of other ALD parents (headed by James Rebhorn and Ann Hearn) as well as from Dr. Gus Nikolais (Peter Ustinov), who is one of the more important researchers in ALD and similar diseases. The treatment eventually developed by Augusto Odone is demonstrated to be substantially beneficial for the maintenance of ALD and halting the disease’s progression. A more refined version of the combination of oils used for this treatment, the Lorenzo’s oil of the title, may well still be in use, but if nothing else, was responsible for maintaining the healthy lives of any number of young boys stricken with ALD.

For all of this, I give the real Augusto Odone as much credit, praise, and thanks as I can. This is a man who threw himself into the problem of ALD with such a will and such passion that he was eventually granted an honorary medical degree. He developed hypotheses based on smart science, backed with evidence, and worked to prove them to be true based on his desire to save the life of his son and, at some level, the life of his wife.

The issue is that most of the people watching this film will completely ignore this and will focus instead on the fact that Odone bucked the scientific world based on (in an easy perception to make based on the film) simply “knowing” that he was right. The film depicts medical science, which is done in particular ways to guarantee both repeatable, verifiable results and safety, as somehow villainous or uncaring. This is the same sort of attitude that has parents of autistic children giving their kids Clorox enemas (no, I’m not making this up) in an effort to “flush” the autism from their systems. This is the sort of thinking that leads to dangerous unreasonability and an anti-scientific dogmatism. That Augusto Odone found something that worked and went his own way is noteworthy, but he got lucky. Additionally, “Lorenzo’s oil” wasn’t prescribed as a treatment for ALD until it went through experimental trials with a larger number of patients and with scientific rigor. The film fails to bring up these details, preferring instead to present the audience with a “dad beats smart guys” narrative that only emboldens people who are causing measurable harm to their children or who are taking advantage of others by promising miracle healings through crystals or prana energy or, well, Clorox enemas.

The film also goes out of its way to promote Michaela Odone as something of a saint who is dedicated to doing anything and everything for her child. To me, she comes across as a monomaniacal martyr. At one point, she kicks her sister (Kathleen Wilhoite) out of the house and away from Lorenzo for merely suggesting that Michaela and Augusto should prepare for Lorenzo not surviving. This sister stays away for months, no longer welcome in the home because Michaela has to be the one who suffers. She boots a nurse for suggesting Lorenzo would be better off in a hospital. The film wants us to see Michaela Odone as a woman who is giving everything for the sake of her son. Were it not for the medical diagnosis of Lorenzo delivered by a doctor earlier in the film, I’d suspect Munchausen by proxy.

Couple this with Nick Nolte using the most exaggerated fake Italian accent outside of an old cartoon, and you’ve got something that frequently works against the story it’s trying to tell. There are parts of the film that are difficult to watch because that’s how I’m always going to react when I’m seeing a kid in pain. But there is more here that is harder to watch because it puts forward such dangerous ideas. George Miller should be ashamed of himself. The agenda put forward by Lorenzo’s Oil is the same one causing outbreaks of measles and pertussis. And it’s a shame because the story here should be giving the exact opposite message. Augusto Odone wasn’t successful because he “felt” like he had the right idea. He was successful because he did the work and set up tests to get the data he needed. The film should have emphasized this. Instead, we get hunches and feelings and the worst message possible.

Fuck this movie. Fuck it hard.

Why to watch Lorenzo’s Oil: Science!
Why not to watch: Most viewers will take away the emotional message instead of the scientific one.