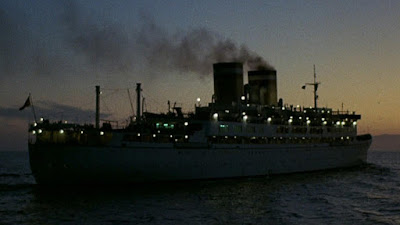 When Voyage of the Damned showed up from at the library, I didn’t really know what I was getting. And then I looked at the cast list. This is a cast that, and I say this with only slight hyperbole, made me pee myself a little. Now, admittedly, a great number of the notables only appear in a couple of scenes. Denholm Elliott, for instance, has about half a dozen lines in the first couple of minutes and never appears again. Seriously, though, the cast is astonishing. Voyage of the Damned also happens to be Jonathan Pryce’s first film and Oskar Werner’s last film. Just to name drop more of the cast, it features James Mason, Faye Dunaway, Max von Sydow, Orson Welles, Malcolm McDowell, Michael Constantine, Jose Ferrer, Julie Harris, Wendy Hiller, Ben Gazzara, and Lee Grant (the only person here to earn a nomination). Seriously, I peed a little.

Voyage of the Damned is a “message” film in that we’re going to be getting a big, important story about the sort of thing that filmmakers love to deliver messages about. In this case, the main theme is one of anti-Semitism in Europe and the world before the outbreak of World War II. In a sort of public relations stunt, the German government has loaded a collection of close to 1000 Jews with the intent to ship them off to Havana. It’s a sort of goodwill gesture/refugee dump with an ulterior motive. Captain Schroeder (Max von Sydow) is a noted non-Nazi, which is why Otto Scheindick (Helmut Griem) is placed on board to make sure that there’s no seditious behavior going on.

It’s a unique collection of people on board, most of them professionals in some respect. A couple (Jonathan Pryce and Paul Koslo) have been released from concentration camps for the trip. The two strongest personalities on board in terms of the Jewish passengers are Professor Egon Kreisler (Oskar Werner) and his wife Denise (Faye Dunaway) contrasted with Carl (Sam Wanamaker) and Anna Rosen (Lynne Frederick), who are travelling with their daughter Lili (Lee Grant). Carl Rosen is far more hot-headed and paranoid while Egon Kreisler has succumbed in many ways to the brutal Nazi regime. The sole romance on board concerns Lili Rosen, who becomes involved with the captain’s assistant Max Gunter (Malcolm McDowell).

While most of the time is spent on the ship, we jump to Havana now and then where a plot is in the works to prevent the passengers from disembarking onto Cuban soil. The politicians work to keep the passengers on board unless they can get something for themselves out of it while others work to get them free. Eventually, the ship arrives and due to particular pressure, two young children are allowed off. The ship, though, is forced to return to Europe when both Cuba and the United States refuse entry of the rest of the refugees.

The sell of Voyage of the Damned is also its biggest issue: there’s a lot going on here. Because of this, most of the stories aren’t really explored that fully. We spend a good amount of time with the Rosens and the Kreislers, but the bulk of the other characters are fairly two-dimensional. There are moments of tragedy and a couple of happiness, but Voyage of the Damned really isn’t about the happy.

Because the story is so big, though, the characters aren’t, and there’s a lot to keep track of all the time. It’s fun to see some of these actors pop up, but then they vanish, and that’s a little disappointing, too. It very much feels like this might’ve been something that would have worked much better in an extended format, like a television mini-series, where the characters could be fully expanded and explored, where Scheindick could really be made a villain and where Captain Schroeder’s motivations could be better explained.

The other issue is that the first two-thirds of the film or so feel like set-up. The story builds and builds and builds without really going anywhere until the ship arrives at Havana and the passengers realize that they are going to be denied the ability to leave the ship. Before this, there’s not much going on other than finding out a little about the people and some background on the situation. It’s not so much a slow burn as it is just slow.

The last 45 minutes to an hour of the film do pay off, but it takes a long time to get there, and that long time isn’t a great deal of fun.

Why to watch Voyage of the Damned: You should pay attention to a cast like this.
Why not to watch: The first 90 minutes are all set up.