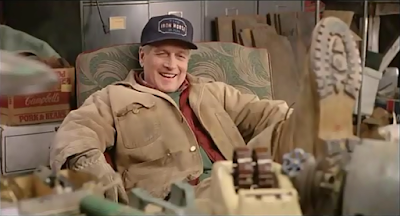 When I look at a film like Nobody’s Fool, I’m not terribly surprised that I don’t know the name of director Robert Benton a lot better. While certainly a film that has some Oscar appeal, this is not the sort of film that elicits discussion of his directorial style. His IMDB page has a couple of trivia facts about him and not a single trademark is it often does for well-known actors and directors. And yet this is a guy who has directed eight people to Oscar nominations (with three wins) and has three wins himself. Why the hell isn’t this guy discussed?

Getting good work out of the actors may in fact be Benton’s trademark. In Nobody’s Fool, he more or less gets out of the way and lets the actors do what they’re being paid to do. This is a character-driven movie, which is a good thing because there isn’t a great deal of plot here to speak of.

Don “Sully” Sullivan (Paul Newman) is in a state of arrested development. Past 60, he has no regular job, working instead under the table for Carl Roebuck (Bruce Willis) doing construction work that no one else wants to do. Sully is more or less dependent on Carl despite a great deal of animosity between the two of them. In fact, Sully regularly sues Carl for payment he claims to have never received and for an injury sustained on the job. Unfortunately for Sully, his lawyer Wirf (Gene Saks) is generally incompetent and can’t win a case. Nonetheless, Sully occupies his time between lawsuits by taking small jobs and flirting with Carl’s wife Toby (Melanie Griffith).

When he’s not making a play for Carl’s wife, working, or drinking, Sully lives as the single lodger of the elderly Miss Beryl (Jessica Tandy in her last film role), who likes Sully despite his being a wastrel. The only person aside from her who really seems to like him is Rub (Pruitt Taylor Vince), his slow-minded coworker.

Things change for Sully around Thanksgiving when his son Peter (Dylan Walsh) shows up in town with his wife and two children. Peter, who has lost his job as a college professor, is trying to save his marriage and failing at that. Shortly after the holiday, Peter’s wife leaves with one of the kids, leaving Peter with son Will (Alexander Goodwin). We learn through discussions between Sully and Peter that Sully left the family when Peter was still a toddler, which makes their sudden reunion an uncomfortable one. The two slowly begin to learn a little about each other and Sully begins to bond with Will and, in a manner of speaking, starts to grow up a little and to realize that he can still salvage a relationship with his son and grandson.

As mentioned above, there isn’t a vast amount of plot here. This is a basic character study of Sully, who ends in a position very similar to the one he started in, although with a number of lessons learned. A great deal of the film is taken up by giving us ideas of the characters in town. Carl and Toby have an adversarial marriage, mostly because of Carl’s wayward eye. Sully has frequent run-ins with local police officer Raymer (Phillip Seymour Hoffman). Miss Beryl’s son runs the bank, wants to put his mother in a nursing home, and isn’t always too careful with how the bank invests its money. We learn who the characters are through their relationships with each other. It’s a nice bit of “show, don’t tell” storytelling.

The most interesting relationship is the one between Sully and Carl. The two constantly antagonize each other, with Carl generally getting the upper hand, at least until the final reel of the film. There is a running gag about Carl’s snow blower and Sully’s penchant for stealing it and finding new ways to hide it. In a sense, the two are friendly antagonists. They both know what the other is doing all the time and act as if nothing is going on at all.

One of the nice things about this film is the depth of the cast. Paul Newman, Jessica Tandy, Bruce Willis, Phillip Seymour Hoffman, and Melanie Griffith tend not to disappoint, and getting this kind of talent together even for the small roles is impressive. This is Newman’s movie, though. He’s naturally the focus as the central character, but there’s not a moment that he doesn’t dominate the screen, even when he’s just sitting and doing nothing. Sully is one of those characters who has few good qualities but is easy to like. He’s a man who truly doesn’t care what other people think of him or what they do, and there’s something liberating about living vicariously through that sort of person.

Not a lot happens in Nobody’s Fool, but it’s a difficult film not to like. A great deal of that comes from the natural charm of Paul Newman as well as the very natural chemistry between all of the players. Nobody’s Fool feels like a slice out of someone’s life, and that’s the highest compliment I can pay to a film of this type.

Why to watch Nobody’s Fool: Paul Newman is always worth watching.
Why not to watch: Not a lot happens.