That's Nobody's Business but the Turks' 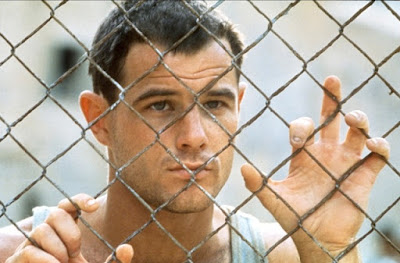 There are moments in Midnight Express that I remember. I’m positive that I’ve never seen this before, but I’d definitely seen bits and pieces of it, certainly at an age before I was really old enough to understand it and long before it was appropriate for me to see it. Those few early glimpses gave me a pretty good sense that Midnight Express was going to be a tough ride. I was not disappointed in that respect. This is not the kind of movie one sits down to with a happy smile and a bag of popcorn with the hopes of seeing an entertaining film.

Midnight Express is based on the real experiences of Billy Hayes (Brad Davis). Vacationing in Turkey with his girlfriend Susan (Irene Miracle), Billy decides to attempt to smuggle two kilos of hashish out of the country for personal use and to sell to friends. If he got away with it, we wouldn’t have much of a movie. He’s caught before boarding his plane and hauled away. After an abortive escape attempt, Billy is tossed into jail at the whim of the notoriously corrupt Turkish prison system.

Things do not go well. The first act ends with Billy being sentenced to just over four years in prison, something he is told he should be happy about since this is a charge for mere possession and not for smuggling. Prison life is harsh and terrible thanks in no small part to the brutality of the guards, especially Hamidou (Paul Smith), who seems to relish beating the prisoners for the smallest infraction. Another enemy is Rifki (Paolo Bonacelli). Rifki is another prisoner, but is also a flunky for the guards. Rifki is widely disliked by the prisoners, but he is also capable of getting virtually anything the prisoners might want.

On the positive side, and that positive side is very slim, Billy does make a few friends in prison. First is Erich (Norbert Weisser), also in for possession and eventually released. Fellow American Jimmy (Randy Quaid), arrested for stealing candlesticks from a mosque, is desperate to get out of the prison and into Greece where he can get home safely. Max (John Hurt), a heroin addict, ends up being Billy’s best friend despite Max’s frequent vacations into a heroin fog. The second act of the film concerns Billy’s life in the prison, which culminates with a brutal attack on Rifki. For that attack, Billy is sent to a ward for the criminally insane where he essentially becomes catatonic.

The third act of the film is, more or less, Billy’s redemption and attempt to escape from the prison system. This involves snapping him out of his intense depression, getting him some assistance from the outside, and a second brutal attack.

Midnight Express joins the short list of films that I have seen that depict something very close to how I might envision hell. As the film continues, Billy spirals further and further into this hell, down to deeper and deeper levels of horror and misery. There is virtually nothing here that is not horrifying and terrible. While not classified as a horror film, I would not object to that classification were someone to suggest it.

There are four or five main performances here; only John Hurt was nominated for an Oscar, in this case for a supporting role. It’s even more reason to love John Hurt, and is evidence that at this point in his career he was something of a chameleon. This film is from the year before Alien, but Hurt looks 15 years older here than he does in the later film. The Academy did a disservice to Brad Davis by skipping over him when the nominations were released, and I can think of at least two nominated performances from the same year that deserved the honor less. This is a real and visceral performance. I can only imagine how emotionally draining this must have been. Of the other principal players, Paul Smith is the other overlooked actor here. There are few more realistic and terrifying visions of pure evil on screen than Smith’s depiction of Hamidou.

Midnight Express is not the sort of film that I can honestly say I enjoy. This is not a film to watch for entertainment; it’s a film to endure. Don’t take that the wrong way, because it is also a truly magnificent film in many ways. It is brilliantly acted and filmed. Director Alan Parker, while he shies away from showing much in what we are told is rampant homosexuality in the culture, shies away from nothing else, giving us truly awful moments without turning the camera away.

I do have one last thing to say here. I have some friends and acquaintances who are Turkish, including one of my favorite professors. Midnight Express did very little for public perception of Turkey. If the Turks I know are any indication, while the country may have serious issues and the legal system may be terrible, the people themselves are great. Then again, I’m speaking specifically of Turks who have come to the U.S. and have not returned, so I admit that my sample size is small and evidently biased.

Why to watch Midnight Express: A truly gripping tale.
Why not to watch: It’s not an easy sit.

Posted by SJHoneywell at 7:49 PM