Film: The More the Merrier
Format: DVD from NetFlix on laptop. 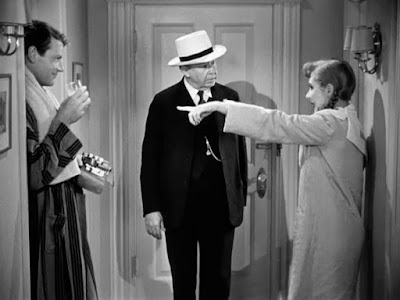 Screwball comedies/screwball romances are kind of hit-and-miss with me. There are some that I adore and some that I’m supposed to like that I really end up disliking. I approach them with a certain amount of caution as I did with The More the Merrier. I don’t even trust a cast implicitly. I didn’t think a ton of Bringing Up Baby, and it has one of the great casts of its era. But I do generally try to go into each film I watch expecting to like it. Preconceived notions have a way of invalidating a review.

Movies like The More the Merrier are why I try to stay positive, because this one is worth it. It’s appeal is almost entirely based on the presence of the great Charles Coburn, who won a Supporting Actor Oscar for this role. I can’t say he didn’t deserve it because he’s clearly the best thing in the movie. That’s not a put down. Coburn is funny all the way through and displays a genius for comic timing and some great physical comedy. It’s all the more impressive coming from an overweight man in his sixties.

This is a wartime comedy, made during the height of World War II, so it naturally uses the war as a backdrop and even a part of the plot. Our film takes place in Washington D.C. where the war has caused a massive influx of people working for and being consulted by the government. One of these people is retired millionaire Benjamin Dingle (Charles Coburn). Fortunately for Dingle, he’s reserved a room at a hotel. Unfortunately for him, he’s arrived two days early, so the room isn’t available, and neither is anywhere else in the area. Desperate, Dingle spots an ad for half an apartment in town, with the occupying tenant available after 5:00. Deciding to act decisively, Dingle arrives before 5:00, walks in and claims the apartment, figuring that he’ll charm the occupant when the time comes.

That occupant is Connie Milligan (Jean Arthur), who is not happy with having an older gentleman occupying her spare room. However, Dingle’s cash is paid up front and she makes an elaborate schedule to figure out how the two will eat breakfast and use the bathroom without bumping into each other. The next morning consists of a series of sight and timing gags that, while a bit predictable from a film that has had these duplicated by copycats, still works well. Eventually, Miss Milligan heads off to work and Dingle prepares to leave. Upon leaving, he meets Joe Carter (Joel McCrea). Joe is in town before being shipped off and has nowhere to stay, so Dingle rents him half of his half of the apartment without telling Connie.

Naturally, hilarity ensues, again with some marvelously timed gags as Dingle attempts to keep his original roommate from discovering the presence of their new roommate. Eventually, Connie and Joe meet and sparks fly. Dingle decides this is a perfect opportunity for a little matchmaking despite Connie’s being engaged (for 22 months) to a Mr. Pendergast (Richard Gaines), of whom Dingle has a very low opinion.

Given that set up, there’s no mystery as to where we’re going here. The question isn’t whether Connie and Joe are going to end up together but how we’re going to get there. And there really aren’t a lot of surprises here, either. There’s a silly little subplot that ends up forcing the two of them together at the end of the film that cements the film into the realm of the screwball and while this is necessary to make the third act work, it’s hardly necessary overall.

Really, it's all about Benjamin Dingle. Dingle is the kind of guy I want to be when I'm in my 60s. He's funny, he's smart, and he does whatever the hell he wants without worrying about what anybody else thinks. He's the kind of a guy it would be easy to dislike because of his mannerisms and demands, but he's just so entertainingly lovable that you can't help but think he's awesome. He's a meddling bastard, but he's exactly the right kind of meddling bastard. Every moment he's on screen, he's exactly where you want to watch.

So let’s get to the heart of it. While Joel McCrea and Jean Arthur make a cute couple on screen, the heart and soul of this film is Charles Coburn. The film suffers when he’s no longer a part of the narrative. Sure the romance works for what it is, but The More the Merrier works much better when it’s a comedy than when it tries to get Joe and Connie together as a couple. Since the third act is a return to the screwball fun, the film ends on a wacky high note, but the second act—getting the two to fall for each other—is substantially weaker than everything else.

The More the Merrier is ultimately a cute film hard to dislike. It’s fluffy, but it’s also the sort of thing that audiences needed in the middle of a war. It could just use a lot more of Charles Coburn.

Why to watch The More the Merrier: Charles Coburn, now and forever.
Why not to watch: It’s fluff, even if it’s fun fluff.