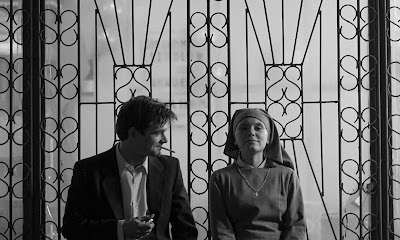 There aren’t a lot of guarantees in life. When it comes to the 1001 Movies list, though, whatever has won Best Picture, Best Director, and Best Foreign Feature are going to show up on the list come August/September. Fortunately for me, Ida is currently streaming on NetFlix, which makes it easy to locate and watch. It’s also scarily, almost “not feature length” short, which is a nice feature on a busy day.

For a movie that won such a prestigious Oscar, I haven’t heard a lot about Ida that made me really want to watch it. Watching it today was more or less heading things off at the pass since I’m as certain as I can be that if I didn’t watch it now, I’d have to watch it in a couple of months. Critical acclaim for Ida has been pretty universal, but otherwise, the reaction has been pretty bland. I won’t keep readers in suspense: I pretty much concur with the general reaction over the critical one. Ida isn’t a bad movie, but I also wouldn’t go so far as to call it a great film.

I’m going to put Ida in a nutshell just to save my own brain from having to go through this blow-by-blow. In the 1960s, young Polish woman called Anna (Agata Trzebuchowska) is preparing to take her vows as a nun. Before she can, she is told by her Mother Superior (Halina Skoczynska) that she must meet her Aunt Wanda (Agata Kulesza), who is her only surviving relative. Anna leaves the convent to meet her aunt, who tells her that she is actually Jewish and was placed in the convent to keep her safe from the Holocaust and that her real name is Ida.

Aunt Wanda and Anna/Ida are polar opposites. Ida has known only the life of the convent while Wanda is completely worldly, having multiple sex partners and drinking to excess frequently. She recommends to her niece that she use this time to experience some worldly pleasures as well, since giving them up will mean nothing if she doesn’t know what she’s missing. The two attempt to find out what happened to their family during the war, and eventually find the remains of Ida’s parents and Wanda’s son.

There’s a little bit more, involving a true what the fuck moment from Wanda and Ida attempting to become a little more worldly at the hands of Lis (Dawid Ogrodnik), an itinerant saxophone player. But really, what happens after they discover the bodies of their family is best left unmentioned in a review like this one. Save that Wanda’s actions are surprising (to say the least) and seem unmotivated while Ida’s aren’t that difficult to guess.

Fellow reviewer Chip Lary over at Tips from Chip has commented that he thinks Ida won the Best Foreign Language Feature Oscar because the film is reminiscent of the works of Bergman. I don’t completely disagree. I’m not sure that’s the only reason or the main reason for Ida’s win, but I do agree that it’s certainly a factor. The fact that this is at least tangentially related to the Holocaust is almost certainly another factor in the film’s winning this award. That it was shot in a lustrous black-and-white also gives the film an art house appeal. There is a timeless quality to Ida, and that works in the film’s favor as well.

The problem is that it’s dull. For a film that runs a hair over 80 minutes, it feels quite a bit longer. Agata Trzebuchowska as Anna/Ida is remarkably expressionless. She almost cracks a smile once or twice, but is otherwise completely passive the entire film. This is not a film in which she is a participant, but a film in which things simply happen to and around her. She doesn’t even talk much. She’s almost a part of the audience.

It’s worth noting that for all of its critical acclaim, Ida caused a great deal of outcry in Poland. One of the major plot points is that Ida’s family was killed by the people who took them in and are now living on the land once owned by Ida’s family. It’s heavily implied that these people were killed not because of anti-Semitism, but so that the land could be taken. So why the outcry? Because thousands of Poles were killed by the Nazis for harboring Jews. Additionally, Wanda is shown as a rabid warrior against anti-socialism, which has been taken by many to perpetuate the Polish stereotype of the Jews being fervent collaborators with the Soviets.

I see both of these problems and I kind of don’t care. I think Ida is worth seeing for the cinematography. It’s pretty to look at if nothing else. And there is something in the story, even if the film feels like it has too much running time despite being only 81 minutes long. But it’s not one I would recommend with a great deal of confidence, or at least one I would recommend with a number of serious caveats.

Why to watch Ida: In a sense, it’s a timeless film.
Why not to watch: It’s pretty straight-up dull.