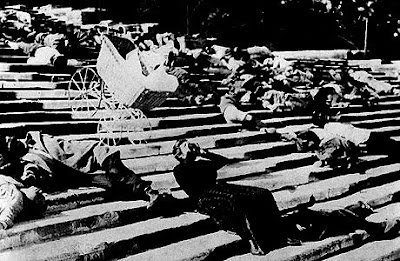 Sometimes, you can tell the where and when of a film within the first few moments of footage. I commented earlier, for instance, that Amelie could only be a French movie, and I stand by that assessment. In this case, Sergei Eisenstein’s Bronenosets Potyomkin is undeniably Russian, and undeniably filmed within a decade of the Russian Revolution.

The movie begins with a battleship heading home after defeat in the Sino-Russian War. What we discover immediately is that the ship is at war with itself. The officers of the ship are brutal, petty, angry, and lord their power over the enlisted men. This happens immediately in the film when an officer beats a young sailor for hanging partway out of his hammock. The next day, the men complain about the quality of the meat they are being forced to eat.

We’re given a close-up of the meat through the pince-nez of the medical officer, and the meat is crawling with worms. The officer, however, states that the meat isn’t rotten, but merely infested with maggots, which can be rinsed out with brine. Based on the quality of the meat, some of the men refused to eat the borscht. Based on this, a sailor named Vakulinchuk (Aleksandr Antonov) believes that the men are being treated worse than Russian POWs in Japanese camps. Insurrection is mounting.

Soon, all hands are called to the deck, and the captain calls out anyone who refused to eat the borscht. A small group is left standing alone, and, due to their insubordination at the refusal of food, they are going to be executed by firing squad. A group of guards are brought on deck and the condemned are covered in canvas to make the shooting of them easier for the troops. Additionally, a Russian Orthodox cleric tells the men under the canvas to repent.

This is where the action changes abruptly—the troops don’t want to shoot their shipmates. Vakulinchuk tells the men with the guns to ignore their orders, and they do. Mutiny takes hold of the men on the ship, and they rebel, tossing officers into the sea and taking control of the ship. While this takes place, the priest is knocked down a staircase and pretends to be dead, and an officer gets hold of a gun and shoots Vakulinchuk in the back of the head, making the man who started the revolt its first martyr.

Now under the control of the rank-and-file, the Potyomkin sails into Odessa. Vakulinchuk’s body is placed in a tent on the docks under a sign that says (depending on the translation) either “for a spoonful of borscht” or “for a bowl of soup.” The tragic death of the rebel leader infects the people of Odessa, who now wish to support the men of the rebellious battleship. This leads to a classic confrontation between the citizens of Odessa and the Cossacks, who attack down the Odessa steps with guns blazing. The Potyomkin sails off, leading to another confrontation, this time with the bulk of the Russian Navy.

Potyomkin is thought of as Eisenstein’s masterpiece. I can’t as yet speak to that, since my Eisenstein vocabulary is extremely limited. It is, like most silent films, highly stylized. There are great moments throughout, but it is the scene on the Odessa steps that is rightfully the most famous. What is fascinating to me is not the staging or the action here, but the evidence that the film vocabulary has changed dramatically since Eisenstein filmed this. For a modern audience, it’s evident that this scene could not have happened as filmed unless the steps in question are about a mile high. People run down the stairs en masse over and over, and yet there are still people at the top, far above the Cossacks chasing them.

This isn’t a complaint, but an observation. When Eisenstein made Potyomkin, his audience was not nearly as versed in film as a modern audience and expectations were dramatically different. What a modern audience notices about a sequence like this is not what an audience in the 1920s would have seen.

The emotional center of the film is its firm belief in the proletarian sailors and people of Odessa. The officers on the ship are uniformly cruel, stupid, arrogant, and sadistic. The same is true of the Cossacks, who shoot children and stomp on the bodies of the fallen. The sailors themselves are downtrodden, but filled with revolutionary spirit. In short, Bronenosets Potyomkin is a victory of the proletarian masses over their bourgeoisie masters. The impotence of the church (Marx's opiate of the masses) as represented by the cleric is pure communist dogma. Looked at in this light, it comes as no shock that the film was made a year or so after the death of Vladimir Lenin.

Worth watching? Yep, if only for the cinematic history wrapped up in its short running time. This is not a movie to watch for the compelling story, no matter how compelling you find the story. This is a film that has been copied and studied for years—you’ll see pieces of its composition, design, and full scenes in other films everywhere you look.

Why to watch Bronenosets Potyomkin: A large chunk of cinematic style started here.
Why not to watch: Hooray for communism!
Posted by SJHoneywell at 10:53 PM