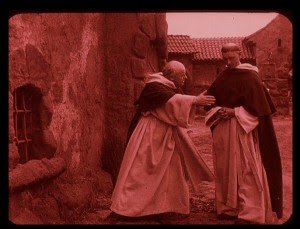 So far, while writing these blog entries, I have not referred to the book(s) that list the films in any respect except for the list of the films themselves. Today, however, I find myself completely nonplussed by the film I have selected to watch. I’m certain this will happen again as I make my way through this list, but I was hoping that I might make it a little further than the middle of the second full week to be so completely stumped by a cinematic offering.

Haxan (there should be an umlaut over the first “a,” but I’m not that handy with HTML coding) is a film from the silent era, and was, I’m certain, viewed because of its dark subject matter. The film concerns itself with witches and with the devil, and there are frequent appearances throughout of a man in devil’s garb—pretty effective costuming for the time in which the film was made. The film posits that so strong was the belief in the devil during the Middle Ages that Ol’ Splitfoot became real, and showed up to menace people and turn them to evil. Housewives engage in the silent-era equivalent of mashing with the devil while husbands sleep on blissfully.

Not just the subject matter is dark here—the film itself is frequently dyed various colors, usually sepia or blue, to give it something of an otherworldly feel. The film also uses a number of primitive, rudimentary camera tricks—superimposing one image with another, having a figure float or vanish through camera trickery—which were no doubt innovative for their time.

It’s actually difficult to pin down what Haxan is. The film begins as a documentary, with information on what may have caused people to believe in witches in the first place. A significant amount of the movie contains no live action, but stills, often with the “narrator” in the form of printed words lecturing on various aspects of ancient belief. Frequently, enhancing the lecture-like quality of the film, a pointer is used to highlight specific aspects of the stills. From there, it turns into more of a horror film, with people being taken possession of by Old Nick, stealing corpses, and being victims of the Inquisition.

I can’t say I love this movie. While it undoubtedly caused a lot of tongues to wag back in the day, I dare say it has lost its power to shock, frighten or otherwise do much more than serve as a historical piece to see where not only documentaries, but horror movies came from. That said, the scene of the old woman giving birth to demons is pretty interesting. It’s also worth seeing for the at-the-time groundbreaking effects of witches flying through the air over houses. Sure, we can see the equivalent of the wires today, but imagine the fear in the average viewer 90 years ago. Watched in that context, Haxan is something special.

Why to watch Haxan: You can lord it over people that you’ve seen one of the weirdest silent movies ever made.
Why not to watch: It’s less interesting than its premise.
Posted by SJHoneywell at 4:27 PM