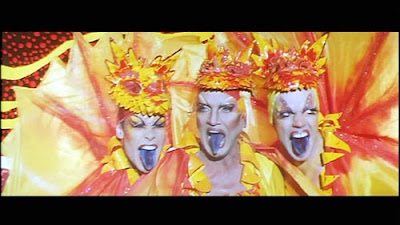 Ten years ago, the average American opinion of an Australian would have been inextricably tied up in the person of Paul Hogan. An Australian, as far as America new, looked, sounded, and acted pretty much exactly like Crocodile Dundee. They all wore hats with the little dingleballs hanging off them, carried huge knives, and said “G’day, mate” at every possible opportunity.

That, of course, is a ridiculous stereotype, as ridiculous as the stinkiness of the French, the stupidity of Americans, or the math genius of Asians. Certainly some Australians are like that, just as some French are stinky, some Americans are stupid, and some Asians are great at math. Just not all of them.

Proof comes in the form of today’s two films, The Adventures of Priscilla Queen of the Desert and Strictly Ballroom. Both of these movies fight against that macho man stereotype, showing us some very different blokes from down under.

Few are as different as our three main characters in Priscilla. Two drag queens, Tick/Mitzi (Hugo Weaving) and Adam/Felicia (Guy Pearce) and a transsexual named Bernadette (Terence Stamp) take a job to put on a cabaret show all the way on the other side of Oz. To get there, they don’t fly but purchase a bus they christen “Priscillia.” The story is their trip from one end of their country to the other through the desert.

Along the way we discover a number of things about the trio. Bernadette has just buried her husband. Tick, despite being flamboyantly gay, is married and has a young son. Adam may have a drug problem, and has a dangerous run-in with a group of homophobes in the outback. Along the way, the trio bitches at each other, Priscilla breaks down in the middle of the desert, and there are fabulous dresses everywhere (my personal favorite is Mitzi’s dress made of flip-flops).

There isn’t really a plot in this film in the sense that there’s no real rising action throughout. The group encounters a problem, overcomes the problem, and moves on. But that’s not really what the film is about. Instead, it’s about acceptance, both of oneself and acceptance from others. Mitzi, Bernadette, and Felicia discover that while they may well be talented lip-synch performers and are undoubtedly fabulous, prejudice abounds almost everywhere they go.

There are some tremendously funny sequences. Their performance for the aboriginal tribe, for instance, is a highpoint, as is the scene where new friend Bob’s wife shows her talents in the bar. There are also touching scenes between the three performers as well as plenty of bitchy moments. Ultimately, Priscilla is a film less about acceptance from others and more about accepting oneself and being happy in one’s own life. It’s sweet, bitchy, a little trashy, and a lot of fun. 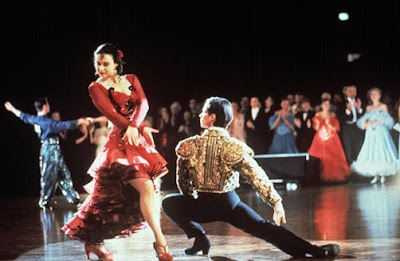 Strictly Ballroom is another one a bit short on plot, but I like it more. In the rough and tumble world of amateur ballroom dancing, young Scott Hastings (Paul Mercurio) is an up-and-comer. However, he’s less interested in dancing by regulation and much more interested in dancing his own steps. His partner Liz (Gia Carides) is stolen away by one of the great dance champions, the drunk Ken Railings (John Hannan). However, tucked away in his own parents’ dance school is Fran (Tara Morice), an ugly duckling waiting to blossom into a champion in her own right.

Based on that synopsis, you can probably figure out exactly how this movie goes. In fact, you can substitute any sport for dance in this movie and you’ve seen this movie a number of times already. This is, ultimately, virtually every sports movie ever made mated with Pygmalion.

But that’s secondary to the fact that there is a joy to this film that is unmistakable. I dislike musicals in general, but I love this movie enough that I sought out a copy and got one for myself. The dancing is fabulous, and there is a real charm to the couple of Scott and Fran. They’re a believable couple, and as a viewer, I want them to be together.

While it’s rare for me to say this, who cares about plot here? Watch the dancing and fall in love with the two as they samba. It’s a thing of beauty.

Of the two films, I’m far more likely to watch Strictly Ballroom again. I enjoyed Priscilla and found a lot of it really entertaining, but there’s not really enough there. The Adam character, for instance, is there mostly as a comic relief, and he’s good at it, but of the three main characters, he’s the one who doesn’t change. In Strictly Ballroom, every major player is different at the end, and that’s something I can respect.

Why to watch The Adventures of Priscilla Queen of the Desert: So much fabulousness in so few minutes.
Why not to watch: You have red state sensibilities.

Why to watch Strictly Ballroom: For the dancing.
Why not to watch: Because you hate dancing.
Posted by SJHoneywell at 9:53 PM