Fighting in the War Room

Film: Dr. Strangelove Or: How I Learned to Stop Worrying and Love the Bomb
Format: DVD from personal collection on big ol’ television. 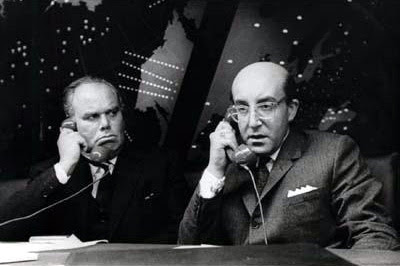 It’s perhaps impossible to deny that Stanley Kubrick was a great director. I believe it’s correct that 10 of his movies are on this list, his final 10 movies, and he only made a total of 16 in his career. I’ve seen one of his films not on the list (The Killing), and I think an argument could be made for including it here as well.

One of his better known and better loved films is Dr. Strangelove Or: How I Learned to Stop Worrying and Love the Bomb. There probably isn’t a reputable Top-100 list of films that it doesn’t appear on, and virtually anyone who has seen it will sing its praises.

That said, it’s also the sort of movie that critics love and that ordinary film viewers may find interminable. The reason for this is simple: Dr. Strangelove is desperately funny, but is presented in general with such a completely straight face that it can be difficult at times to determine. In short, while I think the film is incredibly funny, I can also see how someone could entirely miss the humor, because the humor is as black as it can get.

I think the humor is obvious, if only from the names of the characters, most of which are funny. Peter Sellers plays three of the characters: the eponymous Dr. Strangelove, Colonel Mandrake, and President Merkin Muffley (a merkin is, for lack of a better way to put it, a pubic toupee). We also have Russian Premiere Dmitri Kissov (not actually in the film), Ambassador de Sadesky (Peter Bull), Major “King” Kong (Slim Pickens), General Buck Turgidson (George C. Scott), Colonel Bat Guano (Keenan Wynn), and General Jack D. Ripper (Sterling Hayden).

General Ripper has lost his mind. Convinced that the Russians are going to take over by force of infiltrating American through the use of fluoridation (he speaks frequently of the purity of his own bodily fluids), Ripper gives the order to send his bomber wing into Russia to attack with nuclear bombs. He then cuts off all communication with everyone outside of his own base.

What follows are the extensive efforts to get the planes recalled. This involves bringing the Russian Ambassador into the War Room, where General Turgidson balks because “he’ll see the big board!” President Muffley talks to the drunken Russian leader on the phone. He is upset because the President no longer calls just to chat. Ripper’s Burpleson Air Force Base is overrun, and the fate of contacting Washington lies in the destruction of a Coke machine. And then there’s Dr. Strangelove himself—a former Nazi scientist, confined to a wheelchair, and endlessly battling with his own right hand.

If there is a problem with Dr. Strangelove, it’s that the film is simply too highbrow for a lot of people. It’s the sort of film that makes its mark by being extraordinarily clever, and it would be easy for someone who didn’t want to put any thought into watching a movie to quickly become bored by it.

Personally, I love this movie, and I think it’s worth watching. However, I also understand why someone might dislike it. It does require the viewer to watch actively and pay attention to it. If jokes are missed, there’s not much here to enjoy.

Why to watch Dr. Strangelove: Kubrick doing comedy, and biting satire.
Why not to watch: You have a short attention sp—Oh! Something shiny!
Posted by SJHoneywell at 11:42 PM