First of all, I apologize for being a bit late for this post.

I realize that it’s dismissive to say straight off that all remakes suck. There are a number of remakes that are as good or better than the original versions. For instance, the 1980s versions of The Fly and The Thing are far more interesting than their original versions made in the 1950s. However, in the main, remakes don’t have the same power or the same impact as the original versions of a given story. I’ve had a number of students tell me how much they loved the film Disturbia. Good film, but I liked it better when it was directed by Hitchcock and called Rear Window. 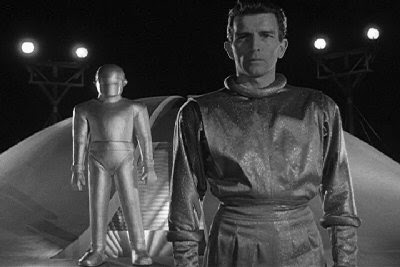 With that in mind, I selected today’s films carefully. Both have had remakes done within the last couple of years. Both of them, in their original forms, are classics worthy of watching and rewatching, and both of them have remakes that have ranked as massive jokes. The Day the Earth Stood Still began life as a hopeful prayer for world peace and turned into a trendy environmental message with a ridiculously oversized killer robot. The Wicker Man, once a disturbing little mystery with religious overtones turned into a badly realized treatise on militant feminism.

No matter, since both of the originals are readily available. In fact, one of the only reasons to buy the new version of The Day the Earth Stood Still is that at least one edition of the movie comes with the original on the disk as well.

TDTESS (sorry, the acronym is easier) begins with the landing of a flying saucer on a baseball field in Washington D.C. A stranger (Michael Rennie) emerges and claims to be coming in peace, but when he pulls out a strange device from his suit, an overzealous soldier shoots him in the shoulder. This brings forth Gort, a massive robot with the ability to melt anything it looks at, an effect that still works pretty well today. The wounded spaceman is taken to a hospital and patched up, where we learn a number of interesting things about him.

For one thing, he is considerably older than he looks, heals faster than he should, and is refreshingly naïve about Earth realities. He wants to meet with all of the leaders of all of the countries of the Earth, a reality that almost certainly couldn’t have happened in the 1950s, and wouldn’t happen today. Rather than wait around, the spaceman (his name is Klaatu, but he goes by Mr. Carpenter), escapes the hospital and takes a room at a local boarding house.

It’s here that I start to understand the desire of some filmmakers to redo classic stories like this one. TDTESS is hopelessly a product of its time. At the boarding house, Klaatu/Carpenter meets two people of interest: Helen Benson (Patricia Neal) and her son, Bobby (Billy Gray). Klaatu/Carpenter spends a day with Bobby while Helen spends time with the man looking to marry her, a reporter named Tom Stevens (Hugh Marlowe). On their walk around Washington, Bobby and Carpenter pay a visit on Professor Barnhardt (Sam Jaffe), a thinly-veiled Albert Einstein.

As Carpenter learns about the world, he eventually confesses his identity to Helen, who works with him to help attempt to bring peace to the world.

There are also things made funny simply because of what we know now as opposed to what we knew then. Watching doctors talk about the advanced medicine of Klaatu’s planet while lighting up cigarettes—normal back then—is hysterically funny now. Klaatu claims to have come from 250,000,000 miles away, which translates as to a location within our own solar system. And that kid…he’s easily the dumbest human being ever filmed. Given perfectly flawless diamonds by Klaatu, diamonds the quality of which have never been seen before on Earth, the kid can’t figure out that he’s dealing with the spaceman, but is convinced that Klaatu/Carpenter is a jewel thief. He doesn’t even ferret this nugget of information out when he sees Carpenter walk to the spaceship and signal Gort the robot (Lock Martin) and then walk into the spaceship. Seriously, this is a very stupid kid. Professor Barnhardt is not specifically a professor of anything but SCIENCE!, and he seems to know everything about everything. Finally, any mother who left her kid with a guy she’d known for one day is just asking for her kid to be abused. The wires holding Patricia Neal when Gort carriers her are especially evident as well.

Still, this is a powerful and moving film, and far superior to its most recent incarnation. If nothing else, it’s a marvelous vision of human behavior, particularly how quickly public opinion changes and alters based on what happens with Klaatu. 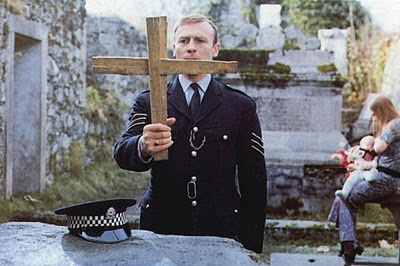 Like TDTESS, The Wicker Man is also very much a product of the year in which it was made and also had a vastly substandard remake made recently. Also like TDTESS, The Wicker Man features a man desperately out of his element and trying to make sense of a strange and incomprehensible situation. A police sergeant named Howie (Edward Woodward) is sent to a small island off the coast of England. A young girl named Rowan Morrison has been reported missing.

However, when Sergeant Howie gets to the island, he discovers that no one has heard of the girl or recognizes her picture. He also discovers that the island itself is home to a number of very strange people. At the inn, before being shown to his room, Howie endures a song from the villagers about the innkeeper’s daughter (Britt Ekland). The song paints her as the town slut, although she doesn’t seem to mind it. Outside, Howie sees a group of people copulating on the lawn. That night the landlord’s daughter, Willow, attempts to seduce Howie.

Stranger for Howie, as he investigates the next morning, he discovers that the people on Summerisle no longer worship the Christian God, a terrible thing for Howie, who is a devout Christian. He sees a group of young women dancing naked around a fire, again something far beyond his ken. He finally discovers that Rowan Morrison has died, but can find no record of a death certificate, and the people of the island are convinced that the girl has been reincarnated as a march hare.

Eventually, he tracks down Lord Summerisle (Christopher Lee), who appears to be as insane as everyone else on the island. From Summerisle, he discovers the source of the religion. Summerisle’s grandfather brought back the ancient religion to the island as a way to give the people of the island something that would make them happier and to have a greater connection to nature.

As Howie continues his investigation, fueled mostly by the discovery of a march hare’s body in Rowan Morrison’s casket, things become stranger and stranger, eventually leading to a staggering climax, one of the true great endings ever filmed.

The Wicker Man is unquestionably a product of the time in which it was made. There’s plenty of folk music and nudity as befits a bizarre little film at the beginning of the 1970s. It’s a heck of a thriller as well as an interesting commentary on the nature of belief and the power of the same. Skip the ridiculous remake, but don’t miss this one.

Why to watch The Day the Earth Stood Still: A grand commentary on human nature and the desire for peace.
Why not to watch: As good as it is, it’s very dated.

Why to watch The Wicker Man: One of the greatest endings ever, and probably the most pro-Pagan film ever made.
Why not to watch: You’re easily offended by non-Christian material.
Posted by SJHoneywell at 12:25 AM