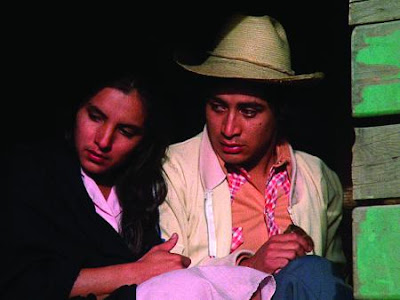 Since Humanity created the idea of a monetary system and an economy, the story has essentially been the same. There are two basic types of people in the world. There are the few who have much and the many who have very little. Those who have a lot want to keep it and want more, while those who have very little would like to have a little taste of the good life. This is the basic story of El Norte, a tale of those who have not trying to make a better life for themselves by heading north to a land they believe has everything they have dreamed of and hoped for.

We begin with the person of Arturo Xuncax (Ernesto Gomez Cruz), a man who picks coffee beans on a plantation in Guatemala. Happy with the land he works on and the work he does, Arturo wants a better life for himself, his friends, and his family. He is slowly organizing a group of peasants to fight back against the powers that be in his village, but the men in charge have discovered these plans, and have sent a hit squad to kill him and everyone with whom he is meeting.

Arturo’s death and subsequent beheading (a warning to those who would organize) causes his son Enrique (David Villalpando) to kill one of the men who attacked the farmers. When Artro’s widow (Alicia del Lago) is taken and nothing is keeping them in their village, Enrique and his sister Rosa (Zaide Silvia Gutierrez) decide to leave their country and head to the north, through Mexico to the United States, a land where, as their friend and neighbor informs them, even the poor have flush toilets and their own cars.

We follow the pair north through Mexico as they move toward the United States. They start their journey with a friendly, if foul-mouthed truck driver, then a bus to Tijuana, where they meet up with Jaime, who is also planning to cross into the United States. He claims to not need a coyote (a man who gets immigrants across illegally) to make the crossing. Sadly, once across the border, Jaime turns out to be quite a bit nastier than he let on; he attempts to rob the pair, but they fight him off. Jaime runs off when the border patrol scoops them up.

Back in Tijuana, Enrique finds the coyote (Abel Franco) used by a friend from his old village. The coyote has retired, but agrees to help as a favor to his old friend. He takes Enrique and Rosa through sewer tunnels connecting the U.S. to Mexico, a safer but much less pleasant path to the fabled north. To get the money to cover the coyote’s expenses, Rosa proposes to sell her mother’s silver necklace, which gives them the money they need to reach the United States. A few mummified cats and a rat swarm later (this will become important eventually), and our Guatemalans have finally reached their goal: California.

And then the second half of the movie starts. Rosa is sent to work in a laundry, while Enrique finds day labor as a busboy in a high-class restaurant. The honeymoon is over quickly, however, as they realize that the same system that was in place in their old village. Those who have give as little as possible to those who have not. Even Los Angeles is quickly a disappointment, as the neighborhood they live in looks exactly like Mexico City.

Life becomes a slow slide down for Rosa and Enrique even as it seems that things are looking up for them, and their lives spiral out of control toward the inevitable and truly wrenching climax.

Having seen this movie, I can officially classify it as what Roger Ebert calls a “Gandhi” film, a film that you are happy to have seen and have no desire to ever see again. My God, this film is depressing, and also long. Watching this, I had the constant sense of impending doom—I spent the entire film expecting the worst to happen at any moment and at every moment. Every decision they make is the wrong one, but every option they have is the wrong one anyway. They have no good options and no good choices ever, and there is nothing they can do about it. I don’t want to have to live through this again. Glad I saw it, and happier that it’s in my rearview mirror.

I can’t fault the film or the story. It is beautifully filmed and compelling, completely engaging. But it’s one additional bad event from being a wrist-slitter of a film, the sort of thing that makes you wonder why we even bother to try anything at all. The emotional impact of this film is like someone gunning down everyone in It’s a Wonderful Life right after George Bailey loses everything. I could barely watch the last 15 minutes, so ready was I for it to be over. This is true to the extent that I planned on watching a second film today, but couldn’t muster up the emotional cojones to do it.

Why to watch El Norte: It’s brilliant.
Why not to watch: Because you’ll be a suicide risk for at least a week.
Posted by SJHoneywell at 10:46 PM