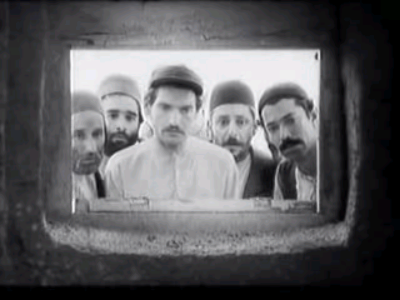 As I look down the list of films still to be watched, I see there are plenty of films I love and plenty that I have never seen but am looking forward to watching for the first time. Then there are the ones I know I dislike and the ones that I’m guessing I’ll have a problem with because they aren’t my type of film. There’s another group as well—ones that I’m not sure about, where I have no clue as to what to expect from them. This is the area that is out of my comfort zone, and these are the films I need to remember to watch, because they are the ones that are the easiest to avoid. In an effort to keep myself watching those films that are not in my comfort zone, I located Gaav, an Iranian film about a cow. I figured this was about as far outside of my comfort zone as I was willing to get at the moment.

The most striking thing about Gaav initially is the title sequence. As the credits are given (presumably in Persian), images appear of a man walking with and tending a cow. However, these images are heavily overexposed, leaving only white man- and cow-like shapes, an unidentifiable image other than a basic outline as if to say that rather than being the story of a specific man and cow, it could conceivably be any man and cow.

However, we learn quickly that there is only one cow in this movie. In this particular Iranian village, there is only one cow, which belongs to Masht Hassan (Ezzatolah Entezami). Hassan loves and babies his cow since in addition to being the heart of his own economic wealth and the only real source of milk for the village, the cow also represents his status. In essence, the cow defines who he is. His care for the cow is somewhere between how a man might care for a particularly nice sports car and how he might care for a child. That the cow is pregnant means that his wealth will increase exponentially soon. However, as he is grazing the cow, he spots three men from a nearby village, the Bolouris, who are known animal thieves, so Hassan plans to sleep in the cowshed to protect his wealth.

The next day, Hassan heads off early to work and while he is gone, tragedy strikes: the cow dies unexpectedly. Knowing that he will react poorly to this, the villagers conspire to bury the cow and to pretend not to know anything when Hassan returns. They’ll all act as if nothing has ever happened, and that the cow simply ran off. The villagers go so far as to lock up the village idiot for a time so that he won’t spill the secret of the true fate of the cow. Hassan’s reaction to the missing cow is, for the rest of the film, to slowly lose his mind. It’s a nice symbolic twist that the village idiot is harnessed in almost the same way as Hassan’s cow—almost as if the two creatures are at the same level.

Gaav is sparsely filmed, as if director Dariush Mehrjui had only a single camera to work with, which may well have been the case. The sound is problematic at times, in that much of the dialogue comes in at the same volume, regardless of where the person may be in relation to the camera. Much of the sound is also obviously dubbed later. This was obviously a necessity for Mehrjui, but the affect is disconcerting.

Additionally, Gaav is too slow, even for a film that clocks in at about 100 minutes. Things simply take too long, and it feels very much like 15 minutes or so could be cut here and there, keeping the same essential story without losing too much. Some of this may strictly be cultural. As a non-Iranian, I am not aware of the cultural significance of some of the events in the film that may well be necessary or important to a Persian audience.

Ultimately, Gaav is the story of loss as well as the story of a community. While Hassan’s reaction may seem extreme, I’m not so sure it is. Imagine losing the most important thing in your life, not for no reason, but without any explanation. One day it is here, the next it is simply gone, and no one has any answers for you. How you deal with that loss, and your own grief, is your own story. How the community deals with the same is theirs. This simply happens to be the reaction of one man, and one man’s community, to a small, private tragedy.

Further, it is the story of a very private world. Hassan, in losing the cow, loses everything he has. Until that moment, Hassan’s world contained only two things—himself and the cow. With the cow gone, Hassan’s world is gone as well, and his reaction to this is the only one that allows him to retain the world he constructed in any respect. His immediate refusal to believe in the cow’s disappearance is perhaps natural, but beyond that, his actions can be explained no other way than insanity or an attempt to retain the one thing that was most important to him, if only in his mind.

While Gaav is moving and powerful, it is too slow and too long for the story it tells. It takes more than half the film’s running time for Hassan to learn about the missing cow, and much of the pace is simply too plodding to be easily watchable. It is worth watching, but I’d love to re-edit it down to something faster and more spare.

Why to watch Gaav: Insanity takes all forms, but few quite so interesting as this one.
Why not to watch: You can’t separate the politics of the current nutjob leading Iran from an Iranian film of a different era.
Posted by SJHoneywell at 6:16 PM