Wu Du, That Voodoo That You Do So Well 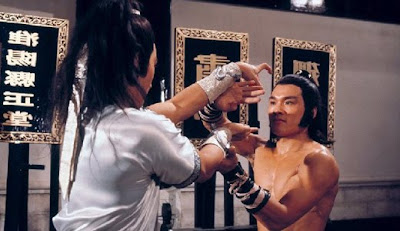 A dozen years or so ago, my first teaching job was in a martial arts school. This makes me officially a bad ass and able to kill you in more than a dozen ways in under 10 seconds. Strangely, despite my love of such things, I’m not a huge aficionado of martial arts movies. I don’t have a huge collection of Jackie Chan films, haven’t seen more than a small handful of movies starring Chuck Norris, and don’t have a shrine to Bruce Lee in my house.

However, there were exceptions, and for years I said that my favorite chop-socky film was Five Deadly Venoms, also known by its Chinese name, Wu Du, and I picked up a copy of it years ago. So it was incredibly shocking to me to discover that this film has appeared in every published version of the 1001 Movies. Evidently, even when I don’t really know anything, I still have the ability to pick out a winner.

Wu Du is unusual in the martial arts genre for its complicated plot and extensive number of excellent martial artists. See if you can follow this: An old master is dying, and he sends his young student off to the city to track down his other five students. Each of these men was trained in a martial arts style defined by a poisonous creature—centipede, snake, scorpion, lizard, and toad. Each has his own particular strengths. Evidently, the master’s friend has a large chunk of money collected by the Poison Clans (same poison creatures as above) that the five former students will want. However, the master wants the money given to a charity. So, the plucky kid, trained to some extent in all five styles, must track down the others, find the money, defeat anyone who is using his Poison Clan style for evil, and, hopefully, survive.

Now it gets complicated. We switch to the city where the kid (Sheng Chiang), almost without trying, encounters the entire clan. Two, Centipede (Feng Lu) and Snake (Pai Wei) are after the money for nefarious ends, and kill the old man and his entire family in an effort to find the money. The third, Scorpion (Chien Sun), wears a mask, and his identity remains a mystery until the end of the film. The last two, Lizard (Philip Kwok) and Toad (Meng Lo) are also teaming up to find the cash. No one really knows anyone else’s identity, but they all know that the others are in town.

Centipede is spotted leaving the murdered family’s house and is arrested by Lizard, other police, and Toad. However, the gambler who identifies the killer is bullied into identifying Toad as the real killer. Eventually, the Scorpion reveals himself, the Lizard and the kid team up and kick ass, and pretty much everybody dies.

This isn’t a movie to watch for the plot, though, because the plot can be difficult to follow, particularly with the odd dubbing in the film (it’s all I have…sue me). The real reasons to watch are the interesting martial arts battles and the even more interesting ways people are killed throughout. For instance, one person is silenced when a large hook is shoved down his throat and his esophagus ripped out. Another has a needle pushed through a nostril into his brain. My favorite, though, is a drugged prisoner is asphyxiated by covering his face with dampened cloths that eventually cut off his breathing—and no evidence of the crime! These killings aren’t carried out with the same joy of a typical martial arts film; in each case, the camera lingers a little over the fallen, and the audience is left with a feeling not of joy or righteousness, but of sorrow for the death.

The martial styles here are inventive, and there’s an entertaining montage (that is frequently recalled) at the beginning to differentiate the five. The Centipede, for instance, is blindingly fast and strikes frequently. The Snake uses a two-handed technique with one hand shaped like fangs and the other like a tail. The Scorpion concentrates on weapons and kicks, and also keeps his hands shaped like Scorpion pincers. Lizard can climb walls and defy gravity while Toad has an iron skin and can bend metal with his fists.

Most impressive here are the actual fights. There aren’t too many of them for a movie of this style, but it’s definitely quality over quantity. The choreography is excellent, and except for the Lizard and the kid standing on the walls parallel to the ground, there’s no wire work here. There are a ton of acrobatic stunts being done for real—jumps, kicks, flips, and more, and it’s the real deal.

So, while the plot is overly complex and too talky in places, this is a film that does need to be seen to be appreciated. Great Kung Fu, great fights. The acting is weird in spots, characters react bizarrely to things, and the dubbing is terrible. This film contains one of my favorite weird lines of dialogue when the kid shouts at the Lizard “Poison Clans rock the world!” Weird…but it’s true. They rock the world.

Why to watch Wu Du: Six extremely talented martial artists beating on each other.
Why not to watch: Ridiculous dialogue, bizarre reactions, and bad dubbing.
Posted by SJHoneywell at 7:13 PM