"M" is for Morbid

The women in my family, or at least my wife and older daughter, are in love with pugs. In their world, there is nothing so loveable and adorable as a pug. I’m not so enamored with the little dogs. They’ve got smashed faces and buggy eyes. If a pug was turned into a human being, it would look quite a bit like Peter Lorre. 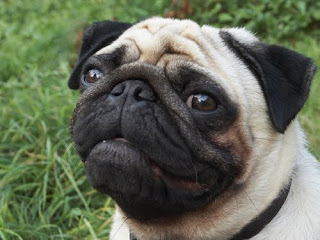 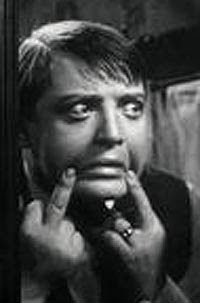 Of course, this says nothing of the quality of Lorre’s acting, or in this case of Fritz Lang’s film, M. Lorre was perhaps the perfect person to play the role of Hans Beckert, a role that required the lead to have something of a disturbing look to him. The reason is that Beckert is a child murderer, and through implication throughout the film, a child molester.

Beckert hunts children, and his presence on the hunt is announced by his whistling a piece from Edvard Grieg’s “In the Hall of the Mountain King.” The people of this unnamed German city are naturally going berserk over the murders, causing riots every time anyone speaks to a child in public. The police are in overdrive, and have continually raided the known haunts of the city’s criminal elements.

This causes a huge amount of consternation in the criminal community, since all of the people in the city’s united criminal underworld are being pinched by the police. In an effort to restore their own criminal enterprises back on a paying basis, the criminals set up a network of beggars to keep an eye out for the child killer with the hopes of bringing him to justice themselves.

What’s worth noting here is Fritz Lang’s use of what now are common film techniques. In 1931, however, all film techniques were new ones. As the criminals meet to discuss their plans for finding and destroying the child killer, for instance, the police are meeting at the same time. Lang cuts between the two conversations in a montage, having one conversation pick up where the other leaves off, back and forth for several minutes.

Lang also uses sound in interesting ways. Beckert himself is introduced by his whistling long before he is ever seen on screen. There are sound-based jokes as well; a beggar covers his ears while listening to a badly-tuned organ grinder, and the music reappears only when he uncovers his ears. In fact, it is sound testimony given by a blind beggar that ultimately verifies the guilt of Beckert, a plot device that could not have happened in a movie half a dozen years before.

While all of these things are noteworthy, what is truly remarkable in M is the way that Hans Beckert is treated not by the police or the criminal element, but by the film itself. There is no question of the man’s guilt, and no question that he is committing one of the most terrible crimes any human being can possibly commit, and is doing so over and over. His capture is something that everyone should want, and yet his treatment by the film, while not sympathetic in any way, is at least understanding. Beckert, given the opportunity to defend himself, makes a fairly compelling argument. It is the case, he claims, that he is compelled to do what he does by something he cannot control while other criminals have chosen to break the law.

Until I had watched the film, I was unclear as to its name. The answer becomes obvious about mid-way through the movie. Identified by his whistling, a criminal arranges to place a mark on Beckert’s back, a chalk “M” identifying him to the underworld so he can be tailed. Roughly the same time this happens, the police also break the case, leading to a confrontation among Hans Beckert, the city’s criminal underworld, and the police.

M is a staggering film for a number of reasons, not the least of which is the daunting subject matter for a year like 1931. It is brilliantly made and acted, daring and impressive. In addition to this, there are elements of humor dropped into the film, a surprise in a film that deals with such an uncomfortable subject. On trial by the criminal element, Beckert’s defense attorney demands to know what right another criminal, a paid assassin, has to judge his “client.” Such touches are deft, and easily overlooked on a first pass.

The film unquestionably belongs to Lorre, who is both terrible and pitiable. He is a monster of the sort shown in another 1931 film, Frankenstein. There is no question that he must be destroyed. It is equally undeniable, though, that he is a product of something other than himself, that he was created by society, or upbringing, or something greater and more terrible than what he became. That such a creature could be viewed with anything approaching pity in the final reel is a testament to what Lang was able to accomplish.

Why to watch M: Few filmmakers today have the guts to make a film like M today; that Lang had the guts 80 years ago deserves some respect.
Why not to watch: The subject matter is too disturbing.

Posted by SJHoneywell at 5:18 PM