I Been Workin' on the Railroad 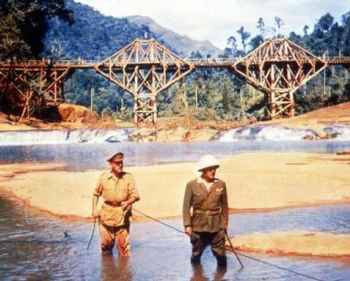 While there are plenty of great war movies out there, World War II gets the lion’s share of really great ones. Sure there are a couple of American Revolutionary War films worth watching, some classic World War I films, a number of great Vietnam films, even a very good one from the Crimean War, but if you start listing great war movies, my guess is that half or more will concern themselves with the years between 1939 and 1945.

When it comes to World War II movies, there are two specific categories that seem to be relatively popular. The first is prison movies, and indeed, many of the great WWII films are based at least in part on prison life. Von Ryan’s Express, The Dirty Dozen, The Great Escape, and Stalag 17 all take place entirely or in large part inside a military prison. The other that seems extraordinarily popular is the “secret mission” film. Shining Through, Saving Private Ryan, The Guns of Navarone, and Where Eagles Dare fall into this broad category. Today’s film, The Bridge on the River Kwai, involves both prisons and secret missions.

We begin in a prison camp in Thailand where Commander Shears (William Holden) and an associate are burying another prisoner who has died from beriberi. They watch as a large group of British soldiers enter the camp whistling the "Colonel Bogey March." You may not know it by this name, but when you were a kid, you probably sang lyrics to it that went like this:

The British contingent is lead by Colonel Nicholson (Alec Guinness), who is the epitome of a British officer. The camp commandant, Colonel Saito(Sessue Hayakawa), instructs the new prisoners on the realities of life at the camp. There are no wires, there is no fence, there are no watchtowers. These things aren’t needed, because anyone who tries to escape will be killed by something far worse in the jungle. He also tells the group that in the morning, everyone will begin working on the bridge that the camp has been charged to build. Nicholson reminds Saito that officers are prohibited from doing manual labor.

The next morning, all hell breaks loose. Nicholson refuses to order his officers to work, and we have a stand-off between Saito and Nicholson. Saito refrains from shooting the officers on the advice of the British medical officer, Major Clipton (James Donald). Instead, he leaves them to stand at attention in the tropical heat. At the end of the day, the officers are placed in a small hut as punishment, while Nicholson is placed in a metal box to sweat it out.

What happens next is a contest of wills. Nicholson refuses to budge, maintaining his dignity as best he can in the iron box, doing his best to walk ramrod straight when he is called out for meetings. Saito tells him that if the bridge isn’t built in time, he (Saito) will be forced to commit suicide. Nicholson remains unmoved, and eventually, on the brink of death himself, gets Saito to relent. At this point, Nicholson takes over the construction of the bridge and turns it into a British operation, taking the construction seriously. His goal, noble as it seems at first, is to regain and then retain the morale of his men—to keep them soldiers instead of slaves. The bridge is his means to do this, and rather than create a temporary rail bridge, he plans to build one that will last for hundreds of years.

In the meantime, Shears escapes, and is shot in the attempt. Wounded, he makes it back to friendly lines, where he tells the British authorities about the rail bridge, Nicholson, and Colonel Saito. The British hatch a scheme to destroy the bridge, and they want Shears to go with them. This team, lead by a Major Warden (Jack Hawkins) needs Shears, and has the way to get him to go with them. It seems that Shears really isn’t Shears. When his ship sank, he came ashore with Commander Shears, but Shears was killed. The William Holden character traded uniforms with the dead Shears in the hopes of better treatment. He uses this as a way to get out of the mission, but discovers that the British already know the ruse, and he’s stuck.

And that’s really the movie here. One guy wants to get a bridge built; another group wants to bring the bridge down. But as with any great movie, there’s much more at stake here than a simple bridge. This movie is about duty. What does it mean to fulfill one’s duty, and how does anyone truly know what his duty is? Where does duty stop and madness begin? Is attempting to keep his men British soldiers in essence committing treason by building a bridge for the Japanese?

All of these questions are asked in the course of the film, and as with most great works of art, the answer isn’t given. It’s left to the viewer to determine the value and impact of Nicholson’s, Saito’s, Warden’s and Shears’s actions and the results of those actions. Each acts from a sense of duty, and each is compelled to his actions by something greater than himself. Warden is particularly interesting here, although I cannot be specific without giving away the ending.

Why to watch The Bridge on the River Kwai: Like most WWII prison movies, a great and intense film, and a brilliant character study.
Why not to watch: It’s long, and the action sequences are few and far between.
Posted by SJHoneywell at 6:33 PM