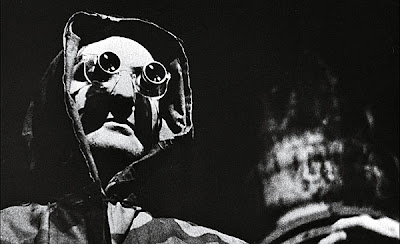 While it’s only been a week since I started this blog for real, I thought it was time to get myself out of my comfort zone and do something new. Up until now, everything I’ve watched has been in English with only one exception (M), and I’d already seen everything at least once before. So, it was time to move into uncharted territory. Thus, I decided to not only look at something in a different language—French in this case—but that was also completely new to me.

Of course, that’s not entirely true in the case of La Jetee. While I haven’t seen this film before, I have seen the film that came from it, and it’s a movie I love very much. Terry Gilliam used this film as an inspiration for 12 Monkeys to the point where a special notice on his film was included to give Chris Marker at least some credit for inspiring Gilliam.

La Jetee cannot be considered as anything other than an art film. In fact, the only real thing it has in common with a traditional film is a narrator. It is not a moving picture as most of us are used to in that it doesn’t actually move. Instead, it is a series of black and white stills linked into a cohesive story by a narrator.

With its short running time, there isn’t a lot of room for exposition in the film; instead, things just kind of happen without much explanation given to us. We start at Orly in Paris as a young boy and his family watch the planes take off and land. The young boy is struck by a particular image, a combination of the sun, the jetty, and a woman’s face. Later, the boy realizes that he has just witnessed a man being killed on the jetty, and this may well be why the image stays with him.

Later (and yes, this is essentially the plot device used here), World War III starts. Paris, and presumably the rest of the world is completely destroyed and people are forced to live underground. With the world uninhabitable, the scientists who live underground are forced to try a variety of experiments. The only way to find what they need to survive—food, medicine—is to travel through time, back to the past. But surviving in the past is impossible for most men. Waking up in an old time as an adult would drive most men mad. The only way for this experiment to work is to find a man who can truly imagine the past.

Because of the path this film takes, I don’t think it could possibly be anything but French. It is a truly existential experiment, one that could not come from a different culture or time. While Gilliam used this film to inspire 12 Monkeys, I don’t think that film would have happened without this one first. It is without question a French invention, and a set piece of French sensibilities.

La Jetee is tragic and sad, and yet filled with its own beauty and wonder. It is a film that I believe will stay with me for a long time, if only because of the way that it works and the way that the story unfolds. It is not a fantastic example of storytelling, nor narration at its best, but it is a wonder of imagination and inventiveness.

Incidentally, if you have already seen 12 Monkeys, the ending of this film is quite similar, and you should go up and read the spoilers. If you’ve seen the one, there are no surprises here in the other.

Why to watch La Jetee: A quiet, tragic beauty and an inventive story.
Why not to watch: 26 minutes of still photography and existential angst.
Posted by SJHoneywell at 8:33 PM