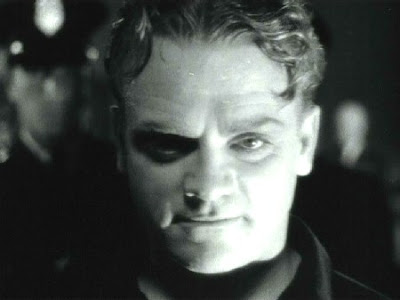 James Cagney and Edward G. Robinson were the two classic gangsters in film back in the day. Robinson could act, but for my money, Cagney was the man. Robinson had a slick evil about him, an oiliness that makes me want to loathe his gangster characters even while I can appreciate the man’s skill. Cagney, on the other hand, makes me want to root for him.

This is definitely the case in Angels with Dirty Faces, which, along with The Public Enemy is one of the roles that made Cagney famous for being a tough, nasty bastard of a gangster. Here, as William “Rocky” Sullivan, Cagney is precisely as you probably imagine him in impressions. Constantly hitching his shoulders and spewing back alley criminal cant, Sullivan is the epitome of a guy who wants to live big and doesn’t really care if he lives or dies. All he really wants is a little respect and a lot of notoriety before he goes down thumbing his nose at the authorities.

The story starts with our twin heroes, Rocky and his best friend Jerry Connolly (played as an adult by Cagney’s real-life good friend and frequent co-star Pat O’Brien) getting in to trouble down at the train yard. They break into a boxcar and try to make off with fountain pens. Spotted by the yard bull, they run for it. Jerry is faster and gets away, while Rocky is nabbed and sent off to reform school. In a montage we see that Rocky isn’t so much reformed as hardened, and he ends this part of his criminal career with a three-year stint in the pen. Before going down, he arranges with his lawyer, James Frazier (Humphrey Bogart) to keep the $100,000 he’s stolen, money Rocky wants back eventually.

At the end of his time in prison, Rocky gets out and drops in on his old pal Jerry, who is now the parish priest of the old neighborhood. He also runs in to Laury Ferguson (Ann Sheridan), once a girl he teased and now a dishy blonde with something of a checkered past. He also looks up his old pal Frazier and discovers a few things. Frazier doesn’t have the money anymore, and the crime in the area is now controlled by Max Keefer (George Bancroft).

As Rocky schemes for a way to get his money, he encounters a sextet of young local toughs played by the Dead End Kids. This kids all look up to gangsters like Rocky and Rocky doesn’t do much to discourage their hero worship, taking an interest in them, particularly their leader, Soapy (Billy Halop). But the criminal element isn’t sitting around—they’ve organized a hit on Rocky. When that fails, Rocky collects his money, but decides to stick around, if only to rub it into the faces of the men who’ve double-crossed him. The trouble really starts when Father Connolly decides to fight the corruption in the area, taking on all comers, including Rocky himself.

This is a fascinating movie for several reasons. Predominantly, it addresses the idea of bad guys, toughs, convicts, and killers being heroes in the mind of the public, particularly the youth. There’s more than a small element of truth to the notion that bad guys are frequently held in high regard, particularly by youngsters, and more particularly by those who are dead broke.

It’s also a product of its times. Father Connolly wants nothing more than to destroy Rocky’s influence with the kids, and he’s painted in the film as a pure soul, one who does only good. Rocky, interestingly, isn’t shown to be a bad guy. He’s a killer, certainly, but he kills only when and because his friend Jerry is put in danger. This doesn’t stop Connolly from essentially leading Rocky to his doom, though, because Jerry has a higher calling.

And it doesn’t end there. The end of this movie is still shocking despite the age of this film. At the time, I’m sure the shock came from Cagney’s actions in his role. Today, the shock comes from the appalling behavior of Father Connolly, who asks the world from his doomed friend. In short, Father Connolly acts like a complete dick. I wanted Rocky to punch him straight in the mug. Even more, I wanted to punch him straight in the mug.

What’s interesting to me is the movie conventions of the time. When Rocky fires his gun at anyone, he doesn’t aim and fire, but flicks the weapon like he has to launch the bullets from the barrel. A few times it looks ridiculous to the point of comedy even though it wasn’t intended to be funny.

Is it a great movie? Hard to say. The morality is strange for this day and age, and the ending is bizarre in the extreme. However, Cagney is brilliant in this role. Absolutely mesmerizing, and worth watching. If for no other reason, he is the reason to hunt this film down.

Why to watch Angels with Dirty Faces: Classic Cagney, Bogart as a bad guy, and arguably the source for all of the Cagney impersonations from Rich Little to Bugs Bunny.
Why not to watch: Father Connolly is a gigantic tool.
Posted by SJHoneywell at 11:55 PM